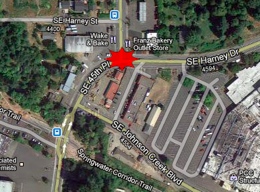 This morning the Portland Police Bureau (PPB) responded to what was first reported as a collision involving someone driving a car and someone walking; but upon arrival, they realized the driver had collided with a man riding a bike.

According to PPB Sergeant Peter Simpson, the collision happened this morning at around 6:59 am at 45th and Harney Drive in southeast Portland (near Errol Heights park and just north of the Springwater Corridor path). Sgt. Simpson says that 30-year-old Robert Downs was riding westbound on Harney and 27-year-old Patrick Jackson was driving his Subaru in the opposite direction and turned left to go north on 45th. As he completed the left turn, Jackson’s car struck Downs.

Downs was treated by EMTs at the scene and then transported to a local hospital with non-life-threatening injuries.

After an investigation (which is required in Portland when a vulnerable roadway user is taken away via ambulance), the PPB determined that Jackson had made an illegal left turn. He was given a citation for Dangerous Left Turn (ORS 811.350).

Glad that investigation was required. Thank you, ex-Chief Sizer.

Curious that we had to have a special law for that.

Does this mean that if I get hit but only have minor injuries I should try to get a ride in the ambulance anyway?

Depends upon what kind of minor injuries. I don’t think you’d be well advised to fraudulently devise a reason to be carried away in an ambulance, or to take one if you just had a scratch or a skinned knee, just so you could get the cops to do an investigation.

On the other hand, if for some reason you weren’t certain what your condition was…feeling out of it…banged up fairly bad…that sort of thing, you might be wise to think about an ambulance ride and a checkup, ASAP. Just being able to walk away from a collision isn’t probably good enough to necessarily skip the ambulance/checkup. K’tesh might have some words of advice about this situation.

Re; the so called ‘vulnerable user law’: As someone, I think, accurate described it in a comment to an earlier bikeportland story, the VUL is merely a clause within ORS 811.135 ‘Careless Driving’. So the cop would have to find grounds for and issue a citation for careless driving, before a person considered to have been driving carelessly, could be required to go to the classes, do the community service, pay the fines, etc, called for in the VUL clause of ORS 811.135

If the VRU clause, (numbers 3-6, maybe with a slight modification, 2 also, within 811.35) were also in other Oregon traffic violation statutes such as http://www.oregonlaws.org/ors/811.350 …the one the officer issued to the person behind the wheel in this collision, then the VRU clause would be in force those citations as well.

are
Reply to  wsbob

ORS 811.135(1), quote:
A person commits the offense of careless driving if the person drives any vehicle upon a highway or other premises described in this section in a manner that endangers or would be likely to endanger any person or property.

Please explain (carefully) how failing to yield a left turn is not in itself “driv[ing] in a manner that endangers or would be likely to endanger.”

Now, does this trigger the Vulnerable Users of the Roadway law?

Nope. That law is only triggered if an officer cites for “Careless” driving, which is a much more serious infraction, legally speaking, than simply a dangerous turn.

So basically this law will never be triggered.

How do we politely thank a police dept for doing their job and protecting ALL of its citizens without rubbing salt in the wound?

How is making a “dangerous” turn, not being “careless”. Just silly semantics. I Don’t think you can have one with out the other?

Maybe he executed his dangerous turn cautiously? Nah, then he wouldn’t have hit someone…

are
Reply to  Jonathan Maus (Publisher/Editor)

ORS 811.350, dangerous left turn, is a class B violation, and is what you or I might call failure to yield. ORS 811.135, careless driving, is also class B unless there is an “accident,” in which case it is class A. I myself personally would not call this “much more serious,” and while I hate to beat a nearly dead horse, the word “careless” is defined in the statute itself as driving in a manner that endangers or is likely to endanger, which clearly failing to yield does.

The vulnerable user stuff comes into play if a cyclist or pedestrian or highway worker is injured, and it does involve the potential for a much higher fine, but the severity of the violation is not increased.

Pete
Reply to  are

Apparently hitting someone isn’t the same as endangering them.

This is a dangerous intersection. Drivers treat that left turn like it is just a curve in the road. Crossing that corner on foot always makes me nervous.

Agreed. That stretch of Harney is a part of my commute (I took a different route today or would have been less than 5 minutes behind this), and people turning there seem to regularly assume that there’s no traffic coming down Harney because “there never is,” and then roll through without looking or slowing down at all.

Just the other day I handcycled down 45th avenue and turned right onto Harney on my way to Sellwood via Springwater Corridor. Now I will be a bit more wary at that intersection.

Over and Doubt
Reply to  Brian Willson

As an aside, sir: Thank you from an Arleta/Mt. Scott neighbor for your service—both military and afterward.

it is hairy intersection. I go thru there sometimes. I keep my eyes peeled on that one.

I bike through there regularly with a Burley and a Trail-a-bike (there is a Franz outlet on the corner, with access to the Springwater for the grocery run.). I too have seen people take that corner as though it was only a curve. I doesn’t help that Harney does not see a lot of downhill auto traffic and that unless you are riding your brakes, it is very easy to get a good head of steam into an intersection with very limited sight lines.

if someone is injured by an error made by a driver wouldn’t that be prima facie evidence of careless driving according to the law, which states “A person commits the offense of careless driving if the person drives any vehicle upon a highway or other premises described in this section in a manner that endangers or would be likely to endanger any person or property.”

He was driving the car. Someone was endangered. 1+1=2