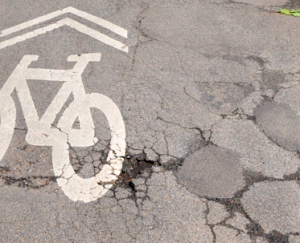 A local pavement company will smooth
out potholes for free, as long as you pay it forward.
(Photo © J. Maus/BikePortland)

If you ride on Portland’s vaunted network of “neighborhood greenways” you have likely experienced one of their less glamorous sides: potholes. A combination of severe weather, city policy that prioritizes paving of large arterials before neighborhood streets, and a general tightening of transportation budgets over the years has led to many roads become littered with nasty potholes. (Two that I frequent, NE Holman and N Michigan, are especially bad.)

If you’re tired of waiting for potholes to get fixed, Tigard-based business Coast Pavement Services has a nifty way make it happen. They got in touch with me recently to share “Potholes for Poverty,” an initiative they launched to fill potholes and do some good in the community at the same time.

Coast will donate all the labor, equipment, and materials to fix the pothole of your choice under one condition: You must agree to donate money or 10 hours of service to a local non-profit. They’ve even got an online form where you can upload a photo of your pothole and make your volunteer pledge. Below is a screenshot of their site showing a few recent submissions: 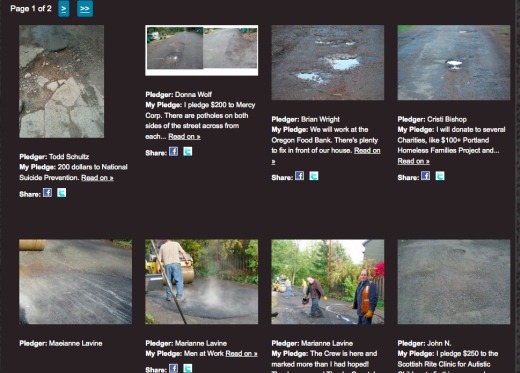 In the past, I’ve reported on the City of Portland’s efforts to find and patch potholes (they also have a pothole hotline at 823-BUMP), as well as citizen activists who have (literally) drawn attention to the issue. Remember the pothole ride back in 2008 which led to PBOT smoothing several of the nasty hazards?

I know many of you ride over potholes every day. Is it worth 10 hours of volunteer time to have it filled? If so, head over to PotholesforPoverty.org and let them know.

Thank you Coast Pavement Services for such an offer – does it extend to Vancouver too? I hope it is limited to Low and Moderate Income areas of the city (CDBG Goverment defined poverty areas for additional targeted infrastructure investments).

The article asks the question if it is worth $100 (or more) of ‘your’ time to do this, but it seems fair given the cost of a bag of cold patch asphalt ($10 at Home Depot) plus your time to buy it and attempt the patch vs. higher quality hot patch plus the labor (2 FTE), prep time and travel time for their services. I suspect their work would last longer.

Why would you want to exclude higher income areas? Does no one ride through them? Is their money less valuable in the hands of a non-profit?

Dave, …well the program’s title inferred a target group – need based on limited income or limited access to services hence the term “poverty”.

But hey, perhaps I was taking their title too literal. You are correct that the poor do bike on rich streets. The CDBG program does expand its target areas into richer areas to improve walking infrastructure per ADA for improved access to transit, jobs, etc. (They assume persons with disabilities have lower incomes.)

But then again perhaps those in well off neighborhoods could still donate their pavement credits to targeted bike streets in poverty zones. Just a thought.

Sounds like a good deal to me. I especially like the multiplier effect of leaving cash out of the equation and putting energy into the non-profs. We really don’t have that much of a pothole problem here compared to nasty winter midwest & east coast etc, but I’m gonna go looking for some now, esp for any affecting two-wheelers!

True, we don’t have the pothole problem. But we have a heck of a lot more unpaved streets than they do!

I’m having trouble with the syntax (as usual). I think this is a cool idea, but aren’t we (assumed to be) opposed to both potholes and poverty? Potholes for poverty doesn’t make sense to me.

Really? Can’t we leave the nit picking for another day and just appreciate someone trying to do good?

9watts does have a point. now a crew of people with sledge/jack hammers tearing up the low-income roads…

i do like the idea, assuming the city would allow a private contractor to just fix some arbitrary pothole, and i suppose the city might . . .

but my suggestion re holman is, there is a perfectly good tree-lined, divided parkway just a block to the south.

Richard Allan
Reply to  are

The City of Portland doesn’t just let contractors fix potholes. If the street has been accepted for maintenance by the City, a permit is generally required:

“Except for street or transportation facility construction and maintenance work done by or under contract with Bureau of Transportation, and except for work allowed to be performed Sections 17.42.020 and 17.42.025 [relating to streets that haven’t been accepted for maintenance by the City], it is unlawful for any person to do any work or perform any act as set forth in this Title without first obtaining a permit. It is unlawful for any person to break up, dig up, cut, excavate or fill in any street or to construct any sidewalk, curb, gutter or to do any work in or upon any street or in any way to tamper with hard surface pavements without first obtaining a permit therefor and paying the fee prescribed in Section 17.24.020. The permit shall be obtained from the Director of the Portland Bureau of Transportation unless specifically provided otherwise in this Title.”

Wildcat/vigilante street repair! This can’t be legal. Jonathan, can you get a reaction from PBOT?

Heck, do some good for cycling and take ten hours to go to the CCC and get a pothole fixed. Imagine if all of us on here did that. Lot less pothoels and a lot more access to cycling.