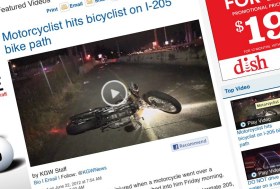 *Scroll to end of story for major update*

Last night at just after 1:30 am I got a phone call about a “weird occurrence” on the on I-205 multi-use path just north of NE Glisan St on-ramp (map).

It turns out that someone on a motorcycle heading northbound somehow managed to end up on the adjacent path and struck a man who was riding his bike. Both people went to the hospital with what are being reported as non-serious injuries.

In that location, the I-205 path is only separated from the on-ramp by a concrete barrier wall (see aerial photo below). While bicycling through this intersection, I’ve often lamented at how awkward and unpleasant it is. It’s not clear how this actually happened. The police have yet to release a statement about it.

Several local news stations responded; but so far they are only reported vague details. KGW says that, “The motorcycle and its driver flipped over the barrier, and the motorcycle knocked the cyclist off his bike.” Here’s a video of their report…

And here’s a map of where it happened: 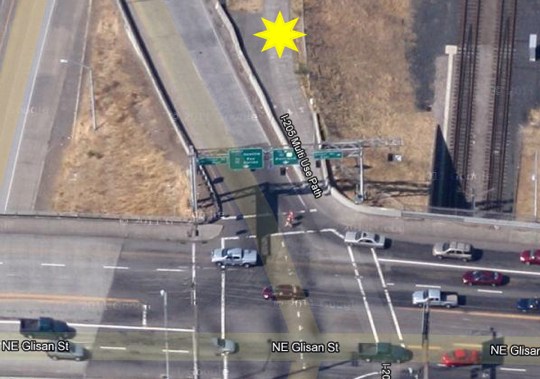 I will update this post when I hear back from the police. I can speculate a few scenarios that might have happened. The motorcycle operator might have been headed westbound on NE Glisan and, due to poor visibility or some other reason, mistook the I-205 path for the on-ramp. Or, perhaps the more likely scenario is that the motorcycle operator was headed eastbound on NE Glisan and then turned left onto the on-ramp, overshot the turn, and hit the barrier.

Anyone have more information?

UPDATE: The PPB has charged the motorcycle operator with DUII, Reckless Driving, Violation of Maximum Speed, and Failure to Obey a Traffic Control Device. Here’s their statement:

This morning, Friday June 22, 2012, at 1:29 a.m., Portland Police officers assigned to East Precinct responded to the report of a crash on the bike path at Northeast Glisan Street over I-205. The caller reported that a person riding a motorcycle crashed into a bicyclist on the bike path.

Officers and medical personnel arrived and located both parties injured on the bike path, just North of Glisan. Both the motorcycle and the bicycle were heavily damaged. Both people were transported to an area hospital for treatment to non-life-threatening injuries.

Officers learned that the motorcycle rider, 28-year-old Ashley Cameron Benbrook, was riding his 2002 Harley Davidson Sportster X88 northbound on I-205 and took the Glisan Street off-ramp at an estimated speed of 60-70 mile per hour. As he reached the intersection of Glisan and the on-ramp/off-ramp to the freeway, Benbrook lost control of his motorcycle and crashed into the barrier between the on-ramp and the bike path, which is on the eastside of the freeway.

Benbrook and the motorcycle crashed over the barrier and hit 34-year-old Jeffrey Omar Glass, who was riding his bicycle southbound on the bike path.

At the hospital, it was determined that Benbrook had a blood alcohol content (BAC) of .094. Because he was in the hospital, Benbrook was given citations for DUII, Reckless Driving, Violation of Maximum Speed, and Failure to Obey a Traffic Control Device.

I love the “Tire Factory” ad when you link to the news video.
Here’s to a speedy recovery for both involved. ouch!

Why don’t we get a full descrip of the bicycle make, model and year, too?

Also, I hope Jeffrey has a speedy recovery, and gets a new bike soon!

Why am I not surprised that alcohol was involved?

Unfortunately, all it took was noticing the time of night this happened to conclude that alcohol was probably a factor.
I’m just wondering if the motorcyclist is the same Ashley Benbrook that was involved in the meth-related death of Jennifer Burkey in Idaho in ’05.
Hmm…
Here’s wishing both parties speedy recoveries (in all uses of that word).

that would have made Ashley about 21 at the time, but news reports say he was 24 at the time of the Idaho thing… probably a different person…

My bad. Jennifer died on ’07. That makes the Ashley’s age about right.

I figured he was on the freeway offramp when they described the location of the incident. The light probably changed, or he didn’t notice the red light until too late. He may have even gone airborne briefly, as he was going 60-70, and that ramp flattens out onto Glisan fairly abruptly.

While bicycling through this intersection, I’ve often lamented at how awkward and unpleasant it is.

yes, it is! I hate it… and it was even more annoying during the construction update of the path months ago… there are often peds crossing and the bike path is directed across the ped crosswalk and onto the sidewalk on Glisan for a block before it continues south… I always let out an annoying sigh when I approach it…

I don’t know if the I-205 path is more awkward and unpleasant at Glisan, Burnside, Stark/Washington, or Sandy.

My personal bugaboo is the north end of the Eastbank Esplanade, with its awkward dual exit/entry ramp (marked to be blocked by exiting traffic), tight downhill turns, and poor visibility.

Glisan, I think is the worst. I got completely lost there because there really seems to be no signage. Flavel is another one which needs some work… so is 92nd for that matter.

Burnside has signs and Stark/Washington is straightforward even if its inconvenient.

I’m not sure which is worse – local motorcyclists joyriding at high speed down separated MUPs (which is what I first feared), or someone simply driving so drunk he thinks it is safe to exit a freeway like that.

What, no mention of helmets?

Exactly. I’m also a little surprised that no-one’s blaming the bicyclist for this “accident”.

I’m sure that’s more than covered by the commenters to the story, which I now refuse to read with any story related to a bicyclist being injured or killed.

Oh snap just when you think ur safe a moto comes into your path. GET WELL and hope you heal fast.

Not many years ago a TOTAL DRUNK drove his car into the westbound MAX tunnel nearly to the ZOO station.

Said he was trying to find the Interstate Bridge.

Jim Lee
Not many years ago a TOTAL DRUNK drove his car into the westbound MAX tunnel nearly to the ZOO station.
Said he was trying to find the Interstate Bridge.
CRC cannot come soon enough for some folks!
Recommended 0

I heard about that, guess drove all the way past sunset?

one evening after dark on the 205 path I had to dodge a crazy person on a moped at speed, who was towing a large trailer, overloaded, no lights or even reflectors on any of it. I wouldn’t even know who to call, park rangers?

Wish we didn’t have to call this path after a combustion-vehicle freeway number. Makes it sound like part of the morning rat-race traffic report, ugh.
I liked “The Woody Guthrie Highway” as has been suggested before. Even if it’s not truly govt approved, 😉

Or the PU truck driver reported to have driven on the 205 bridge path 4ish years ago.

At least there were multiple citations. What’s different about this than the usual “no citation have been issued yet?”

since this is the second motorcycle to crash into a bike in the last year are people going to start calling on more restrictions for motorcycles?

Because he was in the hospital, Benbrook was given citations for DUII, Reckless Driving, Violation of Maximum Speed, and Failure to Obey a Traffic Control Device.

Thank you. My puzzled thoughts exactly.

Seen motorized vehicles many times on the 205 and springH2O. Always wonder where the bike cop patrol is when you need them…

Late to the party with this comment, but I passed two people driving a street-legal dirtbike on the Springwater in the Gresham area of the path a few months ago. This was probably 5 pm on a nice Sunday afternoon.

I shook my head and made a “neck cut” hand gesture, but they didn’t care. Didn’t stop, didn’t turn around and try to fight me, didn’t flip me off – just kept on going.

The conviction from the Hawthorne Bridge motorcycle-into-bicycle crash back in September: