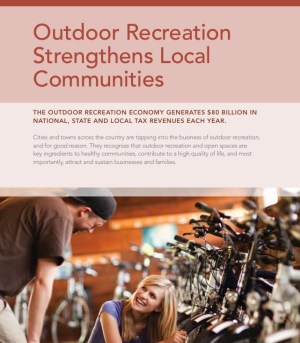 Page from the report

Overall, bicycling as an activity category is ranked third in spending behind only camping and water sports.

The OIA says outdoor recreation is an “overlooked economic giant.” With annual spending at $646 billion, it’s third in total annual consumer spending behind only financial services/insurance and health care spending. By way of comparison, total annual spending on motor vehicles and parts is just $340 billion.

These numbers bode well for Oregon’s efforts to boost bicycle tourism. Travel Oregon is currently working hard to showcase our state’s burgeoning network of official Scenic Bikeways and they’re also working on their own bicycling economic impact study. Stay tuned for more on all those fronts.

I wonder about the overlap of those two categories. Or, put another way, how much of outdoor recreation spending is for motorized equipment?

Or more specifically: how much of the $70 billion for “trip related activities” out of the total of $81 billion also is part of the $50 billion “airplane tickets” set?
Venn diagram anyone?

That’s a lot of trickling down. 81 billion dollars spread over 300 million Americans comes to $27,000 of impact per person.

I understand that every dollar spent is spent again and again, but that claim sounds waaaay bold.

Even if every cyclist in Oregon bought an Armani suit from Skymall during a cross-country flight, I doubt we could hit those numbers.

I stand corrected!!! Sounds feasible to me now.

Heck, I spent that on tubes just last week!

You need to get a patch kit!

That $81 billion is spread between $10 billion on bikes, gear, and accessories and over $70 million on bicycle “trip related sales.”

Does this include money spent on transportation cycling as well? That’s very different from recreation and continues the American myth of bicycles as nothing but toys.

I’m increasingly of the opinion that recreational cycling stands in the way of transport cycling. I’m glad people have fun on their bikes, and race them and go off-road and all that, but those activities dominate public perception of bikes, and turn bikes into “toys”.