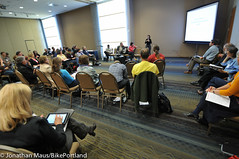 The 2012 Oregon Active Transportation Summit is going strong down here in Salem.

As I type, a room full of engineers and planners are listening to a trio of bike gurus from the Portland Bureau of Transportation (PBOT) explain the ins-and-outs of the latest bikeway designs. City traffic engineer Rob Burchfield, bike program coordinator Roger Geller, and signals division manager Peter Koonce are leaded a six-hour course on the new NACTO Urban Bikeway Design Guide. There’s also a special segment on designing bike boulevards. The idea of the session is to get more planners and engineers around Oregon familiar with things like cycle tracks, bike signals, new crossing treatments, and so on.

There are also several large meetings prior to tonight’s opening speech: One on bike tourism (more on that below) led by Travel Oregon; a meeting of bicycle and pedestrian coordinators from cities throughout the state, led by Sheila Lyons (who holds that position for the Oregon Department of Transportation (ODOT); and a meeting of the Oregon State Trails Coalition, led by two Metro staffers.

And of course, there are many interesting conversations happening in the hallways among colleagues. 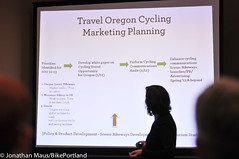 At the bike tourism meeting, Travel Oregon shared an update on their marketing plans. In the crowd was a large and diverse group of people from all over the state. There were tourism officials, city and state staffers, entrepreneurs, bike tour guides, and more.

We’ve shared many times over the years how Travel Oregon (a state-funded non-profit) has taken a liking to biking. These days, bike tourism is the top priority for the agency. They’ve got a full slate of TV and web ads, social media and other communication tools where the message of Oregon as a bike destination is becoming clearer.

Travel Oregon’s Holly Macfee said they’ve identified the top three priorities in their cycling marketing attack plan: State scenic bikeways; mountain biking; and events (like cyclocross nationals in Bend). “Moab is done. Time to eat their lunch,” read one slide. McPhee said the demographic profile of the target audience are high-income white males, ages 30-55 and that they fit the bill profile of the “Creative Class” as defined by Richard Florida.

Travel Oregon is behind a host of efforts to build buzz around biking in Oregon. Cycling plays a prominent role on TravelOregon.com and the RideOregonRide website they helped fund keeps getting better. Now you can whip your smartphone and get a mobile version of the many rides detailed on the site.

More good news on the tourism front is that Oregon now has nine officially designated State Scenic Bikeways. Alex Phillips with Oregon State Parks and Recreation was at the meeting. She said the program has grown much more quickly than she ever expected when it launched in 2009. The State is working hard and fast on this program, with three completely signed routes and several others in the works.

Phillips handed out a map hot off the presses that really puts the program into perspective. Exciting! 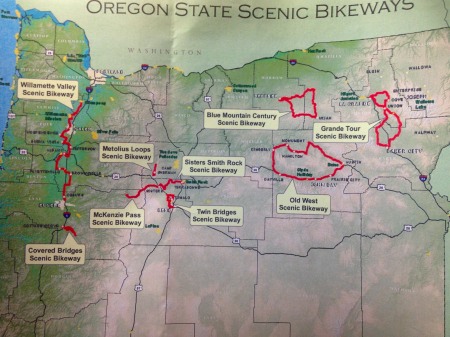 It was also great to hear that Travel Oregon has finally embarked on a statewide bicycle economic impact study. The study is due out in March 2013 and it will track the impact of both tourism/recreation and the bike-related industry in Oregon. I’ll have more on this as details become available.

Bike tourism is Oregon is growing every week. More cities and counties are stepping up to get involved and we are lucky to have state agencies and organizations who fully support it. 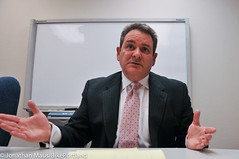 Matt Garrett during
our chat today.

Earlier today I sat down for a one-hour interview with the Director of ODOT, Matt Garrett. I asked him primarily about the evolution taking place at the agency; but also squeezed in a few questions on other topics. Stay tuned for that interview.

Later tonight Alan Durning from the Sightline Institute will speak. His talk is titled, Car-head and the Future of Urban Transportation. Should be interesting.

I’ll be posting more photos and dispatches from the Summit tonight and all day tomorrow. You can also follow updates via Twitter.

Is anyone talking about or anticipating accelerated decline in VMT & car ownership; the end of auto dominance?

I asked ODOT Director Matt Garrett about it today. He said he read the USPIRG report with great interest and that it’s on his radar… But he also added that he’s going to wait and see whether or not the trend lasts.

They’re going to wait and see while their “models” continue to over-estimate VMT in our state. Great.

Alan Durning specifically mentioned it several times this evening during his opening presentation.

I think you’ll find that the US PIRG report shows a “per capita” decrease in vehilce miles of travel. They indicate a 6 percent decrease since 2004.

The US population has increased slightly faster. The 2004 population was about 292.3 million and the 2012 estimate is 312.8 million. That’s a 7 percent increase. If populaton increases faster than the per capita VMT change, we still end up with a net increase in VMT.

And then there’s this:
http://www.ssti.us/2012/02/motor-vehicle-travel-demand-continues-long-term-downward-trend-in-2011/ (graphs for both quotes at the link)

“Despite an improving economy, motor vehicle travel declined markedly in 2011, continuing a downward trend with major implications both for infrastructure revenue and infrastructure needs.

“More striking, per capita VMT was down for the sixth out of the last seven years, dropping to 1998 levels. Per capita VMT dropped 2.1 percent from 2010.”

Trends to date are one thing, and the last few years do indeed look like VMT growth long assumed to be a given may be over (Hales and Brady, and all you other CRC fans, are you listening?).
But my long-standing concern is that transportation planners are not factoring in the possibility that the future won’t look anything like the past when it comes to car dominance, that their ubiquity may also one day end with the disappearance of cheap oil and the realization that climate change isn’t just a theory, or something some folks ‘believe in.’ Those who anticipate this dramatic break might be wrong of course, but there is plenty of evidence that suggests otherwise, and if we’re right it would be foolish indeed not to have included this possibility in one’s planning forecasts.

This problem isn’t unique to transportation planning. A great example of this phenomenon is the case of the Concorde:

When development started on this aircraft, it was thought that this would be the future of air travel, as fuel was cheap, and was expected to remain cheap in the future. Boeing even planned their own version, and expected that the current 747 aircraft would transition over to cargo duty as more and more airlines switched to supersonic aircraft.

In the end, the Concorde never made money for the manufacturer or for the two airlines that operated it.

This is where we are with transportation right now. DOTs are planning for the future under the assumption that fuel will be stable, and VMT will increase. I believe that this will not be the case. This is why we need to stop ill-conceived projects like the CRC. Building such capacity will cost us dearly.

And it will continue to decrease as petroleum continues to rise. Despite fantasies to the contrary, the trend line is set and the picture isn’t going to get prettier.

It’s really important to realize who Matt Garrett is. He’s in charge of a massive agency charged with implementing projects and laws set by the legislature and the edicts of the Governor. Garrett can’t simply read about a report and then shift the policy of the entire agency. People like him move much more slowly with this type of stuff.

Of course. I understand that.
But it is 2012; these issues have been around for decades, and other countries are moving much more rapidly in these directions. My worry is that (legislature, governor, heads of agencies) are collectively pretending like this doesn’t concern us/them, because it is scary/new/unfamiliar. To me this is no excuse.
The USPIRG report isn’t the first hint of what’s to come, and these folks are smart, they read widely. Surely they’re at least as perspicacious as bikeportland readers, no?

Be sure to click on the link above to the NACTO Urban Bikeway Design Guide that was recently released. This is an incredible sign of progress across the country. It’s exciting to see the national movement getting underway. Before long cities will look backwards if they don’t start doing this stuff.

any news of progress on the studded tire ban initiative?

considering the current state of oregon’s roads & finnances i would think this would be well supported by voters. i’d also really like to know where all the money has been coming from in opposition to the bill reaching the ballot.