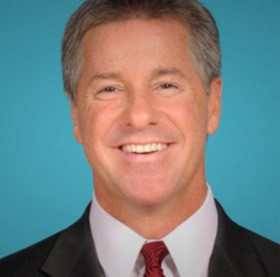 [Publisher’s Note: Turns out that this “bike lanes” thing, as reported by ESPN’s John Hollinger, is part of an ongoing joke he plays with his readers about Portland. See end of post for full update/explanation. — Jonathan]

The Portland Trail Blazers announced today that, after nearly one year without one, they’ve named Neil Olshey as their General Manager. The move seems to be something of a coup for the Blazers, as he comes to Portland from the Los Angeles Clippers, a team that has made a dramatic turnaround from laughingstock of the NBA to legit playoff contender.

At this point, you’re probably wondering why I’m sharing this news on BikePortland. Well, as many of you know from our Bike to Blazers events (which come to think of it, we should fire back up this coming season), I love basketball. Even if you don’t care about the Blazers, as an urban transportation activist and citizen of Portland, you should appreciate that the team has a significant impact on our city in many ways.

But even just naming a new GM obviously isn’t Front Page worthy on this blog… So, the reason I’m sharing it is because it seems Mr. Olshey is something of a bike fan.

In perusing coverage of the big announcement, I noticed that ESPN sportswriter John Hollinger reported that Olshey told him one of the main reasons Olshey picked Portland over L.A., despite being in active negotiations to stay there, was because we are a bike-friendly city. Check out the Tweet by Hollinger last night:

And Hollinger’s mention of the bike lanes also appears in the full ESPN article he just posted. Was Hollinger just being snarky and facetious? Perhaps making a joke about Portland much-ballyhooed bikeways? Possibly, but from the article and the Tweet, it doesn’t seem that way. (Mr. Olshey, if you’re out there, feel free to contact us to elaborate.)

This all bodes very well for the Blazers and for biking. And I am happy. On behalf of all your fellow bike-loving Blazer fans, Welcome to Portland Neil! 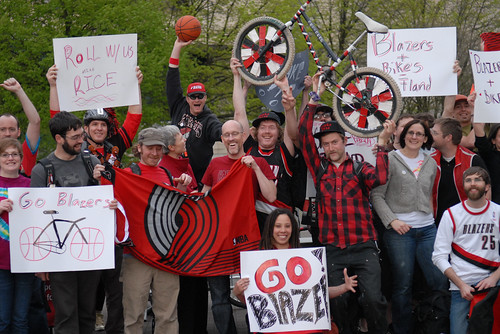 UPDATE, 4:45 pm: After hearing many folks via Twitter chime in to say that Hollinger was likely just joking with this “bike lanes” comment, I finally heard from the sportswriter himself. It was indeed a joke. See the two Tweets below (first is Hollinger telling me it’s a joke and second one is where he makes a comment about me (and Portland) in general: 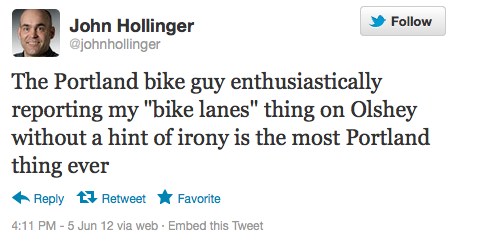 It’s worth noting that my story was not based on Hollinger’s Tweet alone. He also mentioned “bike lanes” in his ESPN article without (at least to me) any hint of joking or irony. While this turned out to be a joke, my enthusiasm for Olshey and bike lanes remains. Sorry if this story led to any confusion.

I saw that, but I thought Hollinger was probably being facetious. Although you never know – he does have a soft spot for Portland.

Its a great day to be a Blazer!

Perhaps now the bike parking will improve at the Rose Qtr?

I bet the renowned blog NoBitingInsectsPortland.org is all over this story too. 99% sure Hollinger’s tweet is facetious. What in the Hollinger’s article makes you think it’s real? (Article is behind a paywall so we can’t read it).

It’d be great to hear something like this straight from Oleshy (or in a Blazers press release), but until that happens, unfortunately I think this is just a story about a sportswriter’s joke.

Somehow I found a link to the full article that wasn’t behind the paywall but unfortunately I can’t find it now. I wouldn’t do an article about just the Tweet. I understand this might be a joke, but when I read Hollinger’s article “bike lanes” were listed right along a list of other things cited as reasons for Olshey’s decision… And Hollinger never wrote anything cute or jokey about it (I looked to see and it never came). I emailed Hollinger to hear straight from him but haven’t heard back.

LeBron rides his bike to games sometimes, maybe we can get him to join the team too? I miss Channing Frye, but I’m not sure if he rode to games.

I’m almost positive Channing Frye owned a fancy bike, but not sure how much he rode it. People loved him because he actually lived in Portland and went to the same restaurants and activities that Portlanders do, and didn’t just live behind a security gate in Lake Oswego, like many Portland professional athletes (which in itself is kind of funny, given the nickname that city has). Other recent Blazers of note: former coach Maurice Cheeks lived in the Pearl and actually walked to local shops; pretty sure Brandon Roy rode a bike now and then; Joel Pyrzbilla had a cool custom bike made for him in Blazer colors.

Hanging out with the commoners didn’t work very well for Paul Pierce.

Cool – I figured this must have been the case, but just wanted to ask since I couldn’t read the article for myself. I knew you wouldn’t post about a single tweet, but it wasn’t clear what from the article indicated it could be real. Thanks for explaining! 🙂

Get over Durant? I’m still not over Jordan. Maybe Hollinger will “be the change” we need in Rip City.

Hollinger is just joking. He uses the same joke as a reason Steve Nash will sign with the Blazers this summer. The insect bite refers to the Blazers’ star player, LaMarcus Aldridge, being bitten by something last week in his home state of Texas that sent him to the hospital and nearly killed him.

Here are some “gems” from John about Portland:

“Portland has wanted Nash for a while now. I have no idea if Nash wants Portland, but there are some advantages. For instance, if he wants to be able to drive 45 mph in the left lane then I’d say the Blazers should be his top choice. ”

“I found it amusing that Blazer fans thought they’d lure Williams with their enthusiasm at the game the other night. News flash: It’s April, and it was 35 and raining the one morning Williams woke up in Portland. He’s not coming here.”

This was just in one chat. The guy must be a self-hating Portlander (or frequent visitor from Atlanta, I’m not sure where he actually lives).

He lives part of the year here (the non-wet times, as he says). Used to live here full time.

Jonathan, I am happy to support you as you are caught in the private joke a narcissistic sports columnist. To John Hollinger, if his joke was misunderstood, “So What!”

A.N.L. , crap I almost forgot! That was a blast from the past.

Welcome to Portland Neil, you won’t be disappointed.