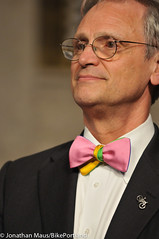 Portland native Earl Blumenauer has served in elected office in Oregon since 1972 when he won a seat in the Oregon House of Representatives at the age of 24. He’s been in politics ever since. On June 14th, Blumenauer’s supporters will throw him a big party to commemorate his 40 years in office.

The event, dubbed “40 Years of Leadership,” will take place at Memorial Coliseum and will include performances by Pink Martini and Storm Large.

During his four decades of leadership, Blumenauer has presided over much of the bicycle and transportation legacy that our region is so well known for. From his position as head of the City of Portland Department of Public Works (what we now call the Bureau of Transportation) from 1987 to 1996, Blumenauer (with Mia Birk as his right-hand woman) oversaw an explosion in bikeway miles. From his office in Washington D.C., where he’s served as a member of the U.S. House of Representatives since 1996, Blumenauer is without a doubt the most influential and well-known champion for bicycling on Capitol Hill.

Check out the official party invite below: 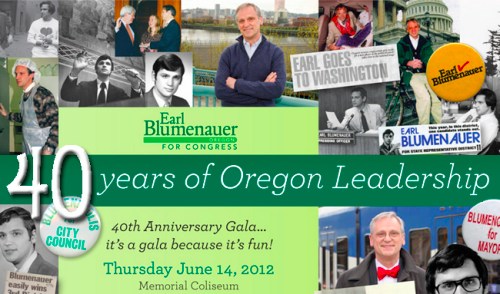 If you’d like to attend and say thanks to Earl for all his work (and wish him well in the years to come), call his local campaign office at (503) 235-3399 to request a ticket.

There could be a great Pedal Palooza event of organizing a crowd of bicyclists with bells to line the pedestrian/ bike entryway (or garage entry) as he arrives for the party.

Not many politicians impress me (in a good way); as a consistent representative of We, the People, Congressman Blumenauer is one who does. He’s had my support since the beginning of his long career.

Thank you Earl for all the support over the years.

Johnathan, you forgot the location

The event, dubbed “40 Years of Leadership,” will take place at Memorial Coliseum and will include performances by Pink Martini and Storm Large.

I don’t think people really care, but Jonathan has selected to censor some basic factual comments about Earl’s record on big issues like war and gay marriage.

Steve B
Reply to  Joe Rowe

Not sure what you mean on the gay marriage issue, but googling turned up this article: “Proudly Changing My Position on DOMA” by Earl: http://www.huffingtonpost.com/rep-earl-blumenauer/proudly-changing-my-posit_b_287689.html

Joe Rowe
Reply to  Steve B

Earl did not have a town forum before he voted on DOMA. He should have made an apology for that.

His pattern is to vote on his personal gamble that you defeat a bully by voting with them. He did offer an apology that this gay marriage ban backfired.

Other issues are similar: Doma, CRC, war, free trade, torture, drones, heath insurance corruption. Earl’s strategy is to avoid a forum and gamble with the strategy of moderate democrats. Myself and many people have asked Earl to hold real forums before he votes.

Earl is silent on the CRC. Nobody has held a real public forum on the CRC where the people who support the CRC give answers to the audience. Most CRC forums have been 3 minutes of speaking, then silence from the supporters.

Earl’s not my enemy, but I’m not going to cheer for a moderate who has done some small good things for bikes and been silent on big issues.