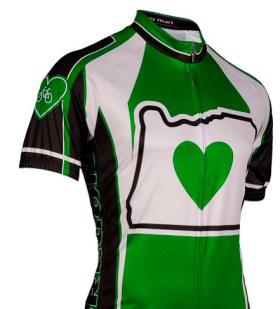 Portland resident Chris Chapman has launched a new cycling apparel brand called, “It’s in my Heart“. The business is just getting off the ground; but Chapman, a former brand manager at Castelli/Sportful, says he’s already got orders flowing in from all of Portland’s major bike shops as well as the Made in Oregon store and REI.

Chapman has licensed the well-known heart artwork from Portlander Chris Bucci. Bucci is the man who became something of a local celebrity for his ubiquitous stickers and hats with a simple green heart inside an outline of the state of Oregon.

Chapman plans to take that design and use it to create jerseys, hats, socks and other cycling apparel items for all 50 states. He’s starting locally; but he’ll make a national launch at the Interbike trade show this fall.

Check out a few more of the Oregon designs below and see other states at his website. Watch for these items at your local shop in the coming weeks. 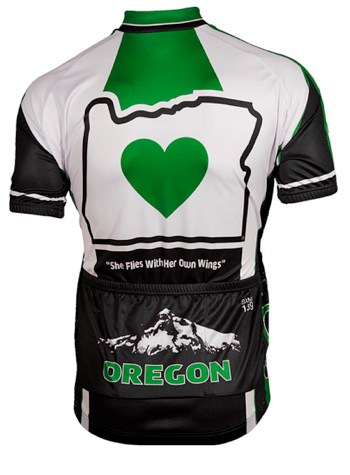 Great idea for a jersey – though I have always felt that since I was not born in Oregon, I really can’t put that sticker on anything. Since state boundaries are somewhat arbitrary, it would be great to see a similar jersey but with the Cascadia bioregion and a green heart. My love for the land around us extends across the river. Or perhaps the historical extent of the 1848 Oregon Territory with a green heart, though that might get into some sensitive cultural issues…

Don’t worry, the sticker is just as legit for OR transplants as it is for OR natives.

Chris Bucci wasn’t born here either. He created the heart-in-Oregon stickers because he’d moved around a lot, and felt like he’d found his way home when he landed here.

Do you live here now? Do you want to stay here? Guess what, you’re now from here!

If you want, put some car wax on before the bumper sticker. If you want to take it off it should then come off without damaging the finish.

No, love it, internalize it, defend it, live it, but you still just live here. “From here” is different.

I thought most of the people who display this sticker are not from here anyway. The iconography derives it’s power from it’s simplicity, which when combined with magical thinking, reinforces pride and diminishes shame.

How about a State of Jefferson jersey? 😉

With the great seal?

It’s funny, that popped into my mind too. If I wear ‘the great seal’, will it prevent me from being buzzed by large pickup trucks when I ride in Siskiyou County? 🙂

The OR shirt is quite cool – tasteful design! I wasn’t born there and no longer live there but pay property taxes and spend significant time there and will proudly sport it anywhere. I get why Bucci claims it as home, and having moved around enough I find ‘locals’ arguments petty. Remember, no matter where you go, there you are!

(P.S. If you haven’t cycled NorCal before, it’s definitely worth putting up with the occasional redneck encounter).

I like the state motto on the back. Very cool, I’ll be looking for them in my local bikey shops!

Some will buy, but for me, it’s lost all meaning as soon as it gets diluted to another state, much less 49 others.

I am not a native Oregonian, but my child is. I have always enjoyed the “Green heart” stickers and saw them a neutral proclamation of love for the raw beauty of this wonderful state. I love my home state , but it seems silly to wholesale out a concept , that to me spoke of a true local pride,native born or not. oh well…

I am a native Washingtonian. When I was growing up I always thought Oregon was no big deal, sorta like my home state w/ less population and no ferries. When I moved to Portland in 1997 I realized I had found my True Home.
Sadly, I have had to move back to Puget Sound for work. I feel greedy and cheapened by the experience thus far. I wish I was back “home” in Portland. PDX is biketopia compared to the North Seattle area.
I still sport my I <3 Oregon bumper sticker proudly.