PBOT will look to prevent this type
of illegal driving.
(Photo © J. Maus)

The City of Portland Bureau of Transportation (PBOT) has announced that they will analyze traffic behavior on the buffered bike lanes on SW Stark and could make changes to the street to improve bike access by the end of the summer.

On April 20th, I shared photos documenting that the buffered bike lane between 3rd and 4th was not working. Stark and Oak (its couplet one block north) were re-striped back in May 2009 in order to improve bicycling access through downtown.

On Friday, I was contacted by City Bicycle Coordinator Roger Geller. Geller shared that they’ve heard loud and clear that the street is not working. He also said PBOT is going to immediately install traffic cameras on Stark to analyze the situation. Then, based on what they see (which will be a large amount of cars and trucks routinely ignoring the bike-only lane), PBOT will “make some improvements to make it work better.”

Geller didn’t say what type of changes PBOT might make, but it’s clear the situation needs to improve. One possibility would be to move the parking lane into the middle of the roadway and put the bikeway curbside. This would deter anyone from driving down it and it would create separation between auto and bike traffic (similar to the cycle track on SW Broadway near Portland State University).

For inspiration, PBOT could look at how New York City’s DOT improved bike access on Grand Avenue back in 2008. Grand Ave is similar width to Stark (34 feet compared to 32 feet) and all PBOT would have to do is swap the existing bikeway with the parking lane. Here’s the plan sketch from NYCDOT:

And here’s how it looks now (thanks to Streetsblog for the image): 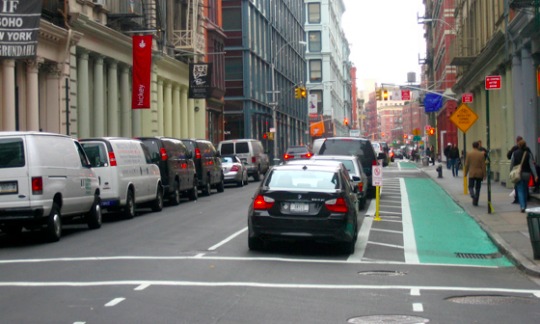 And if you’re concerned about right-turning auto traffic not being able to see people on bikes, download the NYC DOT presentation on the Grand Ave project (PDF here) and take a look at the “mixing” zones they’ve designed at intersections.

Stay tuned. We’ll share from PBOT once we hear about their specific plans. At this point, I’m just happy they are making this a priority.

That said, it is good to see that PBOT does check out what BP is saying.

Excited to hear what they will have to say about this after they’ve analyzed the situation. Thanks Roger and PBOT for the response!

It’s great that PBOT is looking into this. NYC pursued protected lanes because the striped lanes simply did not work, and were constantly used for double-parking and passing. While the problems aren’t exactly the same, it seems that some of the designs form NYC might work in Portland as well. There is still a LONG way to go to make NYC anywhere near as bike-friendly as Portland, but I’m glad that we are able to provide a model of how Portland can do things even better. Good luck!

I hope this can work, but I worry about the political push back on the mixing zones. The NYC schematic takes up to 33% of the on street parking spots to make the mixing work. That seems like a deal killer in downtown.

PS – I post this not as a naysayer but as a heads up that some creative response to parking protests needs to be thought up.

excellent point – parking would need to be removed on the (right turn) intersection approaches so bicyclists are visible. Parking revenue, even from a handful of spaces, to an agency with a big budget hole is not something to ignore. Plus the politics of parking, vis-a-vis the PBA and adjacent businesses, is an issue.

I work in OldTown right next to the Red/Blue Line tracks. Judging from the number of nitwits that drive right down the MAX tracks (Think, “If I fits, I sits!” with two tons of car) I don’t think anything short of a physical barrier will keep cars out of those bike lanes.

I’ve only been down this street a couple times recently, but it seemed like a total disaster to me. I saw more cars driving on the bike lane than in the general lane to its left, and it was clear that their drivers didn’t even REALIZE they were driving on a bike lane.

It works okay on SW Broadway because that street goes uphill and bike speeds are slow. SW Stark is a slight downhill, with much higher potential bike speeds.

I’d rather see the lane configuration remain as it is, with vastly improved surface treatment.

For me, the proposed configuration is not worth it. Oak is already a low traffic and low speed street. The occasional confused driver, though annoying, has not felt dangerous. Getting into the left lane for left turns will be more difficult. Getting around obstactles that will appear in this new green lane will also be difficult.

The zebra-striped diagonal leading to the mixing zone shown in the last pic on Streetsblog would be a great spot for dedicated bike parking!

The curbside bike lane, protected by a striped buffer and then a parking lane, seems to have safety advantages for all mode users.

Bikes – Increased separation from auto traffic, reduced dooring potential
Peds – Improved visibility reduces chance of stepping into path of oncoming bike (but only coming from one side of the street, I guess)
Cars – Reduced chance of dooring or bike-car collision caused when parking or pulling out of a space.

I’d like to see this configuration become the standard. And though it would add great expense, the solid green stripe for the bike lane delineates space pretty clearly. It would cut back on the “I didn’t know i was parked in a bike lane” arguments.

I like Stark/Oak and havent found it to be much of a problem. I think the bigger issue is that these streets are of little use to bikes because they are poorly connected to north-south bike routes. How about a better connection to the Waterfront path and some sort of north-south route on NW 9th and SW Park? I live in NW and would use these routes so much more if they had better connections for when I come from the east-west Pearl-NW bike routes.

The lane striping on both Stark & Oak is faded into near non-existence. If testing this type of configuration is going to take place, it would seem to make sense to at least mark it clearly beforehand – otherwise you’re not sure exactly what you’re testing.

I ride that street once every few weeks, on the way to work around 7:50 in the morning. It’s not a big deal, I just take the lane. Agree with some others: this is not the highest priority.

Not a high-traffic street, not a priority.

Just paint some sharrows and call it good.

By all accounts, motor vehicle and bike traffic on this section of Stark seems to be light, so having PBOT spend staff labor on keeping motor vehicle traffic out of a bike lane that apparently has very little bike traffic, on a street that doesn’t have very much traffic in general, doesn’t seem like a very constructive use of people’s time and money.

Put a key bike lane on a street that many people on bikes actually use, or would use if a bike lane was there, then maybe have PBOT spend time troubleshooting if motor vehicle traffic is for some reason driving on the bike lane.

While PBOT is investigating, I hope they consider the impact of BoltBus blocking the bike lane several times/day.

SORRY. I was confusing Stark and Salmon. Nothing to see here….

Thanks Jonathan. I do hope they follow the New York model. I used to commute in Manhattan, and I remember that the parking-separated bike lanes were the only ones remotely usable.