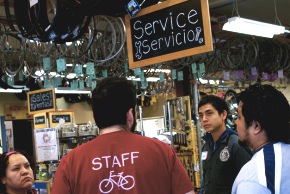 The Community Cycling Center’s (CCC) work to bring the power of bicycling into new communities has led to the formation of a new advocacy group, Andando en Bicicletas en Cully (ABC) – which translates to “Riding Bikes in Cully.”

ABC is a group of people who live in Hacienda CDC, an affordable housing non-profit in northeast Portland that the CCC first began working with in 2009 as part of their Understanding Barriers to Bicycling project.

The group of residents at Hacienda have taken a special interest in using bicycling as a way to promote health for both their children and their community. In a press release about the group released last week, the CCC shared results of a bike census (see it below) carried out by members of ABC that was done, “to demonstrate the need for bike storage in their neighborhood.” 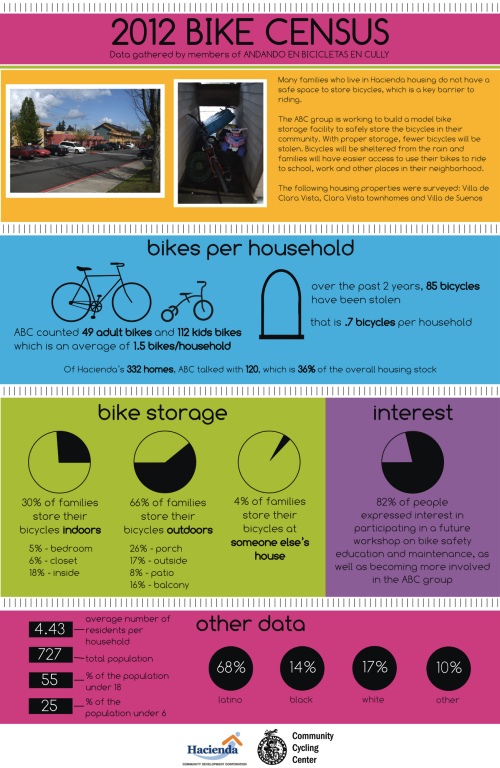 Why focus on bike storage?

“Bike storage is an issue for most families living in affordable housing, where the units are small and there is less space for bulky items, like bikes,” said CCC Program Director Laura Koch.

In addition to the census, ABC is set to begin a regular bicycle maintenance and repair training to the Cully neighborhood (thanks to an assist with training from the CCC) and twelve members will receive training as Community Bike Educators. The trainings will give these Hacienda residents the knowledge and skills to repair bikes, find safe bike routes, and keep their friends and families rolling year-round.

This new advocacy group, and the partnership with the CCC that sparked it, is excellent news. There’s a lot of talk in advocacy circles these days about how to present the benefits of bicycling to lower-income communities and communities of color. Instead of just talking about it, the CCC has been working hard at this since 2008 and now their labors are bearing real fruit.

Bicycling writer Elly Blue (who wrote about the CCC’s work a few years ago), referred to this as “seeding the grassroots” in a blog post about Andando en Bicicletas en Cully she posted today:

As far as I can tell, the CCC has been for years the only bicycle advocacy organization in bikey Portland actively reaching out beyond the rapidly gentrifying inner city. There’s a lot of awkward hand-wringing over race and class and bike lanes in the comments over at BikePortland, but few bike leaders seem to have been willing to go out and ask questions and absorb the potentially uncomfortable and game-changing information they might find.

At the National Bike Summit tomorrow, there’s a breakout session titled, “Building Successful Programs in Diverse Neighborhoods.” CCC Executive Director Alison Graves will be there to share her organization’s work and hopefully inspire other groups to follow suit.

I’m so grateful for the CCC’s work and outreach on this. They are helping make sure that the faces of cycling in Portland look like all the faces of Portland!

This is a fantastic, short and sweet study that helps us better understand the needs of all portland bicycle riders and potential riders. I’m glad to see community organizations reaching out beyond the favored inner neighborhoods.

That said, the gentrification in Portland is spreading, and Cully is no longer the far out neighborhood that it once was. As more people realize that a 5 mile neighborhood is only a 30 minute commute to the central city, Cully, Montavilla, Foster/Lents will all be a part of the displacement process.

This is great, I live in the cully neighborhood and would love to volunteer.

Jonathan, thank you again for bringing this issue up. Seems as though two years ago there was discussion on this forum about this issue, but then it just faded away. I asked at CCC event(bike class) no one seemed to know anything about it, or whom to talk to. I would love it if you could provide a link to Ms. Graves bike summit presentation, or the Summit it self. Again much appreciation, d

If y’all want to read my blog post referred to here, it’s at: http://takingthelane.com/2012/03/20/seeding-the-grassroots-portlands-newest-bike-advocacy-group/