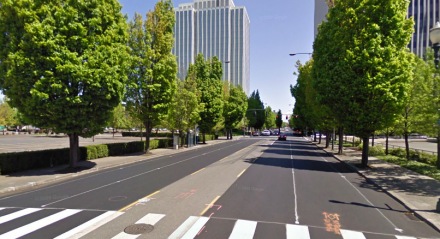 A project that would significantly change NE Multnomah Blvd through the Lloyd District from auto-centric thoroughfare to livable-city poster child has progressed since we told you about it back in December.

“Who knows, in a couple years from now, this could be one of coolest streets in Portland.”
— Tom Miller, Director of PBOT

If you recall, the discussion about making NE Multnomah the main east-west route for bicycling arose after a lengthy public process focused on NE Holladay ended back in October without a clear path forward.

For the past several months, the Lloyd Transportation Management Association (LTMA) has been meeting with property owners along the corridor to get buy-in on the road diet plan. According to LTMA Executive Director Rick Williams, everyone has been “very receptive” to the idea and he’s “cautiously optimistic” they’ll have enough support to bring a recommendation to their board next month.

The Bureau of Transportation echoed Williams’ optimism about the project. I learned more about the project in a phone call with PBOT Director Tom Miller, project manager Ellen Vanderslice, and City Traffic Engineer Rob Burchfield today.

Burchfield says his team is “very optimistic” and is “getting a lot of support” to change Multnomah from five motor vehicle lanes down to three motor vehicle lanes. The reconfiguration would give PBOT the room to create “world-class bikeways” in each direction along with other features that would “activate the space.” The project would focus on Multnomah from NE 16th to NE 1st/Wheeler near the Rose Quarter.

In addition to a major new bikeway, some of the re-allocated space would go to on-street auto parking and “parklets” — tiny parks or patios that sit in a parking space. PBOT says parklets and bikeways would help create a “lively streetscape” on Multnomah.

Key to these discussions — and a reason major property owners are on board — is a sense that Multnomah is currently dead. With five auto lanes, substandard bike lanes, and little to no retail or residential activity, it lacks the vibrancy today’s developers crave.

Speaking of developers, just a few days ago, news broke that a massive new, $250 million residential development with 750 housing units is planned on the block between NE 7th and 8th. (To put that in perspective, PBOT’s Miller says there were 852 housing unit permits issued across the entire city in all of 2011.)

Miller says the managers of that development, Langley Investment Properties, are supportive of the road diet plan and they’ve been “actively involved with the discussions” thus far. Miller says that for a large residential development to succeed, there must be activity and vitality on the street.

At this point, the LTMA and their stakeholder group is expected to put together a recommendation and forward it to the LTMA Board for their April meeting. If the board votes in support of the recommendation, PBOT will then begin an official public process to present design ideas and resolve more detailed design issues with a pilot project to begin this summer.

So, what happens to Holladay, a street that was the focus of months of meetings, has a design and funding ready to go, and ultimately had support of all but one stakeholder?

Vanderslice points out that the funding set aside for Holladay would be switched over to Multnomah. She also says, “We haven’t completely given up on Holladay in the long run.” And Miller adds, “From my point of view, Holladay is a good project, but the momentum is on Multnomah. I can easily imagine a day when we come back and implement [the plan on] Holladay.”

Miller is clearly excited about the potential of Multnomah to re-energize the Lloyd District. “Who knows, in a couple years from now, this could be one of coolest streets in Portland.”

I work on this street. I am excited. This would rock (anywhere in Portland).

I often go from the NE 12th overpass and then onto 11th before turning onto Multnomah Blvd. IF a bike box was installed at NE 9th Ave and NE Multnomah Blvd on the NE corner, I would see this as a welcome development along Multnomah Blvd. I am hopeful this will develop well.

I don’t think I’ll ever take Multnomah over Weidler/B’way unless they somehow make the light timing work well for bikes, which is nearly impossible on a two way street. The timing on the lights on B’way/Weidler near the B’way bridge has gotten worse the last couple years, which is not helped by the designated bike signals and likely will get worse with streetcars.

With the generous real estate of 2 car lanes I hope that Portland cyclists don’t get greedy. World class bike lanes in and of them selves do not make a neighborhood livable. Trees with shade, and a planting strip that sets sidewalks back from traffic both contribute to livability. Bicycles are no less vehicles than automobiles, but at the end of the day it is PEOPLE who use the space and a dynamic pedestrian presence is vital to desirable, livable neighborhoods

This is a bike blog, but cyclists are people first.

Also, it seems PBOT can do much more for pedestrians as a part of many of these projects. It’s good to see them doing that here.

Good news indeed. Holladay doesn’t really need to be changed till the Sullivan’s Gulch corridor is done. Perhaps the city can help out the redevelopment by using the SDCs from the 7th superblock apartments to build the much needed ped/bike bridge over the gulch at 7th.

This is an excellent project. Many “win-wins”. Lets hope it moves forward rapidly.

I work there too. I’d rather see a building and more restaurant options over a graveyard of parked cars anyday!

For sure if it brings in more restaurants I guess. The J cafe may get some real competition!

Chris I
Reply to  Matt

You will just need a promotion, so you can move into an upper floor on the new building.

Color me sceptical. Less than a mile of cycle track (allegedly, but without details for all the usual vexations of a ‘track in a grid) with one high-rise residential/mixed “superblock” in the middle, the Rose Quarter at one end, an anti-urban mall and multiplex cinema at the other…that’s it? That’s a world-class urban design? Sounds to me like a ’60s design studio project with bikes thrown in for window dressing. It’s certainly neither a complete community nor a city-scale multi-modal transportation route, nor a particularly desirable place to be in just for its own sake. As Grandpa alludes to upthread, it’s going to take a whole lot more than a few “parklets” in order to “activate the space.”

Coming so soon on the heels of the power brokers nixing many months of community input on Holladay, this small plan feels a lot like throwing a bone to the beggars. If there were any reasonable likelihood of Holladay ever getting back in the mix, why aren’t those same power brokers putting forth a comprehensive Lloyd District plan which includes all of the streets in that zone? Streets (and the communities they serve) do not exist as analytically isolated entities!

Did anyone else expect to see the Beatles crossing here?

this will never happen. I’m not confident in are ability to get bicycle projects done. Lets just put sharows all over the place and call it a ”Bike boulevard”.I want bike lanes dammit, big wide ones on major streets.