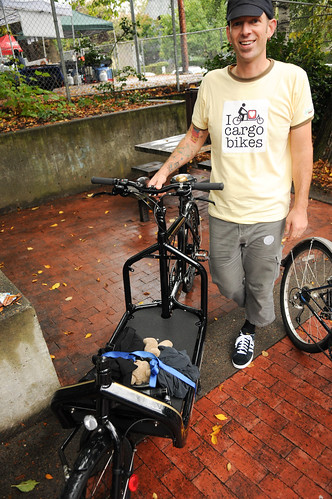 Travis Wittwer loves cargo bikes and you should too.
(Photos © J. Maus/BikePortland)

Whether it’s their utility (both domestic and commercial) or their potential to help others in the community, Wittwer is convinced there’s a need for cargo bike owners and fans to come together and get organized. While his own interest in them started when he bought one to cart around his three sons, Wittwer’s now looking to start a grassroots organization to foster cargo bikes’ existing popularity even further. 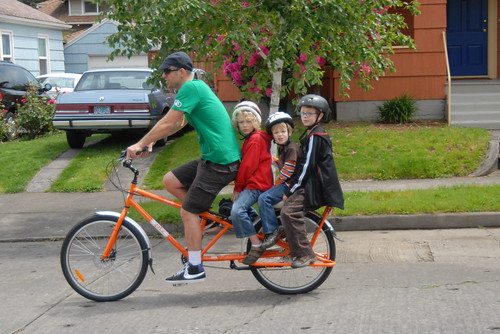 The men of the family on a Yuba Mundo longtail cargo bike.
(Photo © J. Maus/BikePortland)

Wittwer’s relationship with cargo bikes began when, in 2007, he took a couple years off from teaching to spend time with his kids. He knew he’d have to make some changes if he wasn’t bringing in a regular salary:

“I wanted to make our lives as simple as possible for those years and knew two things (a) I wanted to decrease the out-go of money and (b) spend more time with my kids. Biking, and cargo biking in particular, allowed for this… For awhile I would use a tag-a-long bike with my eldest son, and a trailer for my two, youngest sons. Sometimes I would use both and create a cumbersome bike train: my bike + tag-a-long + trailer.”

Eventually Wittwer decided there must be a better way to carry three kids on a bike. What he found was an easier solution that gave him more time to focus on his sons: a cargo bike:

“I looked at the various options, styles, and companies and at the end of the summer in 2008, I purchased a great bakfiets from Clever Cycles. In this one bike, I could carry all three sons and their school gear. We spent about 40 minutes, twice, every day, going to and from school. This was quality time.” 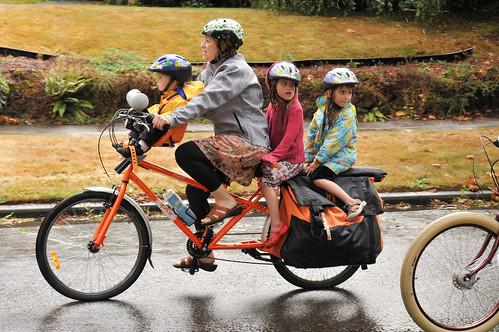 This is becoming a common sight in Portland.

Saving money and having more family time are two of the reasons, in Witter’s estimation, why many families are starting to look at cargo bikes as an alternative to owning multiple cars:

“People want to do more with their lives and spend less money. A cargo bike can do this. Do you really need a full car to get your kids to the neighborhood school? For most people–no. A cargo bike makes grocery shopping, errands, everything feasible. A family can do a lot with one cargo bike. Many families are shifting their lives to be car free or car light because they have a cargo bike.”

It’s easy to see why plenty of families have a cargo bike in their life, but Wittwer doesn’t see the same level of organization from cargo bike owners that he sees with other groups. That surprises him because Portlanders are known to be proud of their bikes. 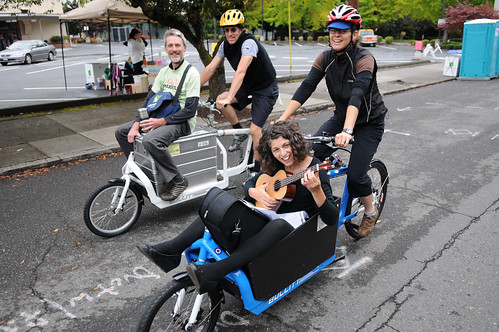 Wittwer says people he knows with different cargo bikes, “talk about them as if they were talking wine preference.”

Enthusiasm for cargo bikes isn’t all about fun and games, either. Witter saw them play an important role in the Occupy Portland protest but feels their potential is left largely untapped because there’s no way to communicate with people who want to get involved:

“It became clear during Occupy Portland that cargo bikes could be used for social good when [protesters in camp] needed garbage removal. If there was a way to organize cargo bike users, we could come together for a social good.”

Thanks to Wittwer and others, that organization is starting to take shape.

Wittwer and others are working to start an organization with the goals of showcasing the utility of cargo bikes, organizing them for social good and to (hopefully) inspire other cities.

Right now they’ve got an email list of cargo bike enthusiasts and a name: TransportLand. The group’s website is coming soon so if you’d like to get involved, keep an eye on TransportLand.org or send a message to transportPDX [at] gmail [dot] com.

or? …or what? you can’t just leave us hanging there… 🙂

…or… send an email to the group at transportPDX [at] gmail [dot] com.

Cargo bikes. What to say really?
Yes.
Essential.
Can’t really imagine getting into cars much anymore unless there’s a beach or mountain destination involved.

Your bike and the HUB kegger bike are my two favorites!

It’s a holding page for a newly registered domain, until the new owner gets some content up. SOP.

TransportLand.org: put up some content!! Some pics of your favorite cargo bikes, maybe?

Just a thought – any possibility of this new group reaching beyond Portland? Cargo bikers are all over North America.

It will. Want to be part of that?

Love the cargo bikes, love the Cargo Bike Rollcall, love Joel & Barb for giving us a ride, love the article.

To my ears, Transport Pee-Dee-Ex is a much better name and pronunciation than Transport Land, which conveys as Trans Portland, which is not what this group is all about.

Love the movement, love the Wittwer clan, but the unintentional double meaning is gonna get me every time. Surely I’m not the only one.

Nope, you are not the only one. But I is what it is. When suggestions went out for a name, few came back.

Looked at from another angle, I may be a great name once you pronounce it as Transport land just like it took me awhile to learn how to pronounce Quinoa.

The name could imply transportation as first and important. Portland is an inference. The overall goal will be an American cargo hauling on bike experience. Focusing of Portland narrows the goal. Whaddayathink?

That would be my momtourage on the orange Yuba Mundo, affectionately named “Marmalade”. I often ride my oldest daughter as well. This photo was taken at the NE Sunday Parkways last September. We LOVE our family cargo bike!

I believe that Bikesnob’s formula for calculating smugness quotient needs to be quoted here:

Bikesnob is a national treasure.

Cargo bikes, and trikes, are clearly a big part of the solution as the oil-world collapses around us … slowly for now, but volatility means that one event [Iran?] can shift things dramatically in an instant.

Count me in on self-reliance and local solutions.