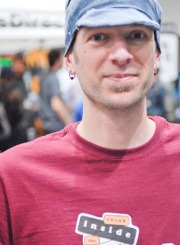 North Portland resident Travis Wittwer loves bike racks and bike parking. That’s nothing extraordinary on the surface; I mean, I like bike racks too, and I’m sure many of you appreciate them and even get excited/happy at the sight of an on-street bike corral or a whimsical art rack. But Travis really loves bike racks. He hunts them.

I’ve known about Travis’s interest in bike racks ever since he and friend debuted their hilarious “Wild Creatures” film at Filmed by Bike in 2008. It was a spoof of The Crocodile Hunter but instead of crocs, they hunted bike racks (it was followed up last year with “Rack Attack!“). Since then, his interest in bike racks has not waned. The other day he sent me a Google Map of Portland bike racks, complete with photos and annotations (see it below).

Travis’s relationship with racks has clearly reached a newsworthy level, so I decided it was time to ask him a few questions about it…

Why do you have such an interest in bike racks? 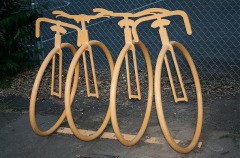 “Racks are these silent creatures that hang about in the city. They do not do much and are just there. However, they are a indicator of how well a bike community is doing. You only needs racks if they are being used. Portland has over 4624 bike racks last time I checked. I have seen bike corrals grow and pop up all over the city.

There is nothing fancy about racks. Shear utility. The blandness of racks have spurred some to come up with fun ways to provide a rack, but do so with personality. People walking down the street who see a rack shaped like a coffee cup, or a tooth, or a pair of glasses on the sidewalk smile. The people interact with their city. It is like having art in the living room.

There is also a science to rack placement and I have seen many poorly placed racks: staples turned against the flow of pedestrian traffic; wave racks that put the bike’s front wheel too close to the building so they are useless; or racks made out of inferior materials. This appeals to the city planning geek in me.

Racks are quiet, unassuming, useful things. They are almost invisible and often forgotten, but serve our city well.”

How long have you been tracking them?

“Racks are these silent creatures… they are a indicator of how well a bike community is doing.”

“I have watched bike racks for several years, but really started tracking them with a “Bike Rack” photo group on Flickr two years ago. The goal was to share bike racks and get into discussions on what works and doesn’t, share cool ways to achieve a bike rack or bike station, share arty racks. This group even lead to the creation of a group showing Bad Bike Rack use/placement.

I have met several people in Portland, USA, and other countries who share an interest in bike racks and what they symbolize for bike culture.”

What’s was your motivation in creating the Google Map of racks? Just a hobby? Or are you really trying to provide a service so people can find them?

“I have a contact that I met through the bike rack group on Flickr whose opinions and observations on racks were serious and informative. He came to visit Portland for the first time this year to see the city and go to Filmed by Bike. In preparation of his arrival, I set up the Google map so he could tour the city a bit, looking at racks. Soon after creating it for him, I enjoyed having the racks in a place where I could see the location to other racks, businesses, and a thumbnail image.

It is just a hobby. A way for me to engage with Portland, people who like bikes, and the way the city runs.” 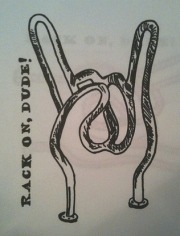 “In this age of nearly limitless city data, it would be cool to have an app for racks so people could find the nearest one (not that there is a lack of racks in Portland) or find a particularly interesting shaped one. I thought that there may be other people in the area that would enjoy the project of cataloging racks in Portland. It appears that someone has already gone in and started to organize the racks by “good” or “bad”, giving each option a different colored marker.

Anyone can ask for editing rights to the map so that this can be larger than just me and a few others.

In the future, I’d like to see Portland have a bike rack art installation or contest (similar to New York City) that would serve as a way to bring the bike community together. It could be a celebration with a ride, brochure, explanation of bikes in the city, used for information and promotion of bikes…. Perhaps a bike scavenger hunt for Pedalpalooza next year. Perhaps, a cargo bike bike rack… Hmmmm.”

Thanks for sharing your interest in racks with us Travis. Good luck with your future hunts and projects. (By the way, Travis is also a cargo bike enthusiast, but that’s a subject for another day).

Very cool project. What a great resource! One rack to add to the map is a city-issued blue staple on SE Stephens, between 28th and 29th at Colonial Heights Presbyterian Church.

LOVE the map!! I feel like I waste a lot of time looking for bike parking. I hope the map continues to grow to include the burbs & beyond. An app would be super sweet. I would absolutely use it, and would even pay for it (I’ve only paid for 2 of 144 apps…but this one would be totally worth it)

It seems like there aren’t many “normal” racks (i.e. blue, city-installed staple racks) on the map, I’m wondering if that’s by design or just because they haven’t been reported.

I’d be interested in getting editing rights for the map, but I don’t see any contact info for Travis in the article. What’s the best way to contact him?

Spiffy & Cyclist, you are both correct in your observation of the lack of staple racks. Two reasons at this point: (1) there seems to be staples everywhere and (2) the map goal at this point is for unique racks in look, placement, use, etc.

It would be great for someone to get an app going or something where racks could be added by anyone with the app. I do not have the skills for that, but it could provide a great service and there would be just enough rack geeks out there to contribute.

Anyone have the skills for an app or aggregated public warehouse of rack info that can bused in a dynamic way? Rack locator, effectiveness of rack, rack style….

Cyclist, go to http://twitter.com/BikeNounVerb to get contact info. I’d rather web crawlers not pick it up. Anyone else want edit rights? Contact me.

Very timely. I am installing a bike rack out my back door and this has definitely got me thinking beyond the standard staple rack.

Does anyone know how I find one of these racks?

Jim, the rack in the link you posted is on my commute. Going north on Williams, right side. I bet you could make this rack because it is not a tube and you could bend thick, flat metal rather easily. However, and here is something about which you need to rack (ha) your brain. That rack has pros and cons. Pros: inexpensive. Can be done non-commercially. Cons: angled sides are rough on bikes. Thin metal easier through which to cut and the whole structure will collapse if weight is place on it…you know, get skewed all trapezoidal.

However, these may not be concerns as you just want it on your property. I think that is great. I also want to put a rack in my backyard for when friends come over. Plus it will look cool to have a a rack in a non-trad location.

Thanks much Travis. Those are good things to think about and I like the DIY approach. This rack will be along a narrow semi-private alley between lived in multi-family housing with windows and lots of people activity so security is not that much of a concern… however stability is something to think about because it may temporarily hold bikes loaded with groceries or other cargo (Jessica Roberts are you reading this?). I will post a photo here when I get something installed … hopefully within a couple weeks. Thanks again for the tips.

The Bad Bike Racks group is here if anyone would like to contribute:
http://www.flickr.com/groups/867127@N24/

My serious and informative opinions and observations are on my blog:
http://www.stevevance.net/planning/tag/bike-parking/

Two of my favorite “personality” bike racks are the cat- & dog-shaped racks at the Oregon Humane Society, not on Travis’s map. Unfortunately, the OHS is located on an exceedingly bike-unfriendly stretch of Columbia Blvd., so I don’t think they are much noticed by the bikey community.

Great project. But the “Rack on, dude!” design looks a lot like “Hook ’em, Horns!”, so beware of lawyers from Texas.

Rebecca, I wish I knew. If you find out, or if anyone dies, let us know. I have not found a source. Too expensive for yard whimsy for me.

Michael, I will have to check that out. Maybe someone has a photo to upload.

Thanks all for those who added photos and rack spots.

Travis, have you ever thought about doing a coffee table book? I think it would sell well and it could fund your good work.

Anton, yes. However, I am not a gregarious person who could pull off the business side of a book. Want to do one?

I have also envisioned a cargo bike calendar, but, here again, not businessy.

A coffee book with photos and facts and information on city planning and placement would be sweet.

Greg or Steven, want to do one?

I decided to ask metal artist Richard Cawley(http://2009.richartsculpture.com/)to build me rack out of old bike parts to match his other bike-part metal work at Peninsula Park Commons. The cost won’t be much more of buying a single standard staple rack. I know he is currently working on another bike rack for Woolsey Corner, another project of Eli Spevak’s Orange Splott LLC (http://www.orangesplot.net/).

Speaking of businessy, Travis has some cool photos on his Flickr page that transfer nicely to t-shirts. 🙂 Likewise, some prints of his rack designs would be very cool (with or without the actual racks).

The new cameras coming out will have wi fi and gps built into them. You can identify where a picture was taken or create maps with pictures automatically put into the correct spots

Any good apps for iPhone or Android that do geo-tagging?

Does anyone dislike unique racks? The staples are always what I go for to lock up my bike. Unique ones are difficult for U-locks, especially since I secure both the frame and the front tire.

My Richard Cawley designed and built bike rack is finally installed at Peninsula Park Commons. I really like how it turned out. See photos at: