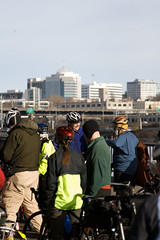 As per Portland tradition, a hearty group of folks welcomed 2012 on bikes at the 55th annual New Year’s Day ride.

Led by the Bicycle Transportation Alliance (BTA), this year’s ride had a different theme — to take a closer look at the issue of off-road trails and to highlight new pump track facilities.

Pleasant weather and quiet, low-traffic streets were our reward for getting out of the house. BTA staffer and seasoned ride organizer Carl Larson led the way as we left the meet up spot under the Morrison Bridge, headed through downtown, and crossed the river on Burnside. 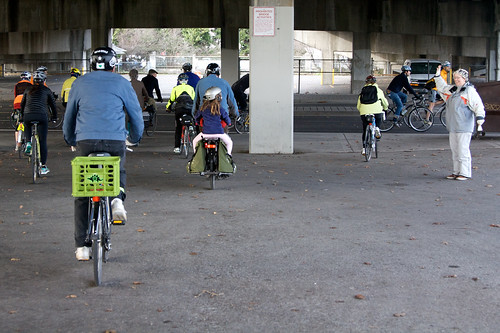 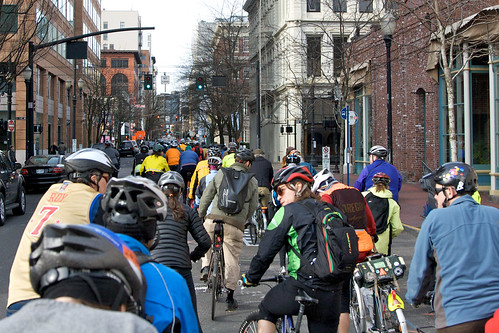 The first pump track on the route was all the way out at Ventura Park on SE 117th so we made a stop along the way to refuel. 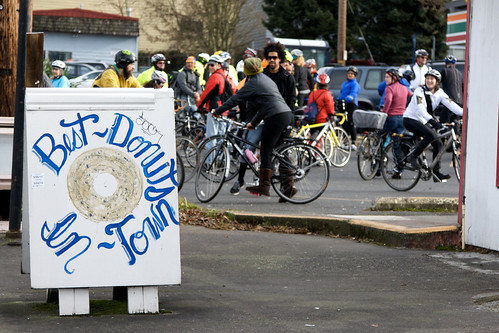 Once we arrived at Ventura Park, Larson talked about the work done to install and maintain the pump track there. The track was built as a joint effort between Portland Parks & Recreation and the Northwest Trail Alliance and opened in 2011.

It gives neighbors a place to ride off-road in a safe, accessible location and reduces the demand for unofficial (and often illegal) pump tracks in other locations.

Most people on the ride gave the pump track a try, including some on bikes that you don’t normally see riding off-road. 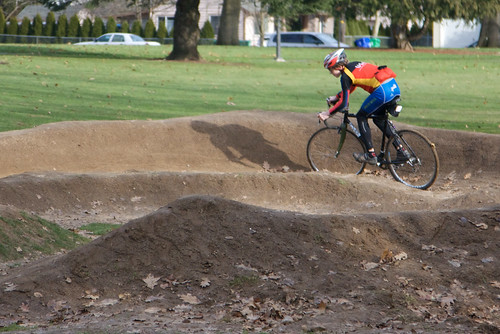 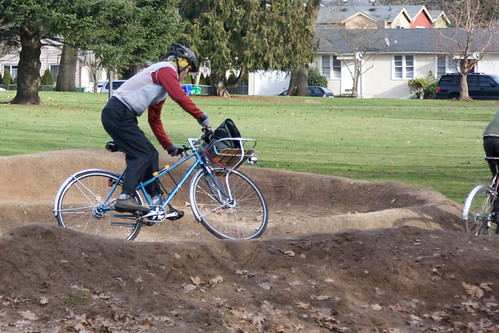 After Ventura Park we headed north on the I-205 path to visit a series unpermitted trails built in the 1990s on land owned by Oregon Department of Transportation and The Grotto. 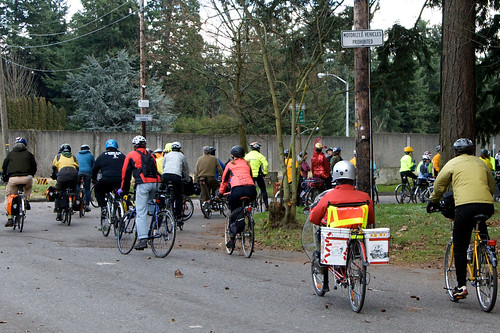 Out of respect for private property owners, the ride stayed on public roads and didn’t go onto the trails.

Although the trails are unpermitted and are not officially maintained, they’ve remained in relatively good shape over the years. 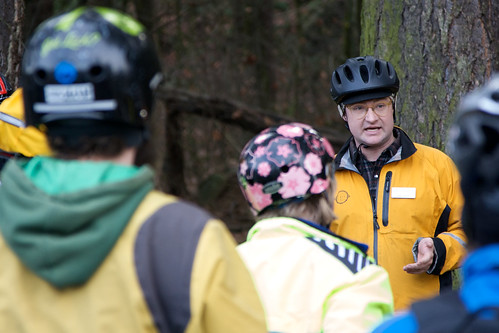 Larson pointed out how maintenance of the trails is a good indication of the demand for pump tracks and off-road trails in Portland. People looking to ride off-road have enough trouble finding legals places to ride that for years they’ve put their personal time and money towards building and maintaining trails.

Unfortunately some activity on the unofficial trails has led to property damage and other issues that cause conflicts with neighbors and property owners.

Another stop on the route was the future home of The Lumberyard, a privately funded indoor bike park opening soon on NE 82nd Avenue.

The original plan was to take a look inside, but due to a last minute schedule change the person with the keys wasn’t able to let us in.

(You can still take a peak inside The Lumberyard in this video.)

Instead of going inside, we shared oranges in the parking lot and Larson talked about how a business like The Lumberyard is one more sign of the desire people in Portland have for a safe, legal place to ride off-road. 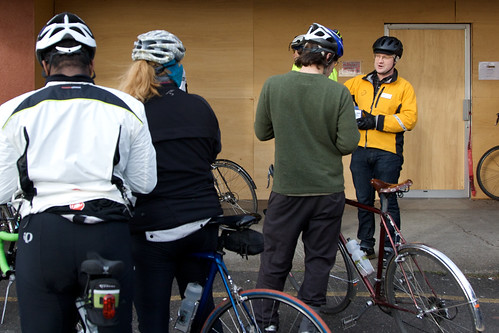 The ride ended at Eat.Art.Theater, a restaurant and event space on NE 81st. Warm drinks were welcome after cold headwinds most of the afternoon and everyone on the ride had a chance to chat about the places we’d visited.

Did you ride on New Year’s Day?

Here’s my photos of the ride…

awesome photos of the ride k’tesh!

That’s awesome! I would have been there, but I was on the Cyclewild New Year’s Revolution trip out to Stub Stewart. Similarly, we did some mountain bike trails on our touring bikes, and we had a nice ride into Vernonia for lunch. Apparently New Year’s Day is the day for hanging out with friends and going for bike rides- I can’t think of any better way to start the year!

“Unfortunately some activity on the unofficial trails has led to property damage and other issues that cause conflicts with neighbors and property owners.”…. Now it is limitted to homelessness, drug use, RC cars, rock climbers, and the 3-4 drunks who fall and injure or kill themselves on the cliffs each year, and…I shudder to say this, but dump bodies. Kicking the bikes out does not seem like the logical solution. When the bikes were there the homeless, drunks, and druggies weren’t welcome. I’m sure the neighborhood is a much better place now. *smh* For the record: I have never ridden the Grotto though I love going out and watching Portland’s own world class riders killing it for free. Just dumb! dumb, dumb, dumb.

Did you just lump Rock Climbers in with “homelessness, drug use, RC cars, rock climbers, and the 3-4 drunks” As a rock climber thanks for that buddy. As for the Grotto it was never shut down. There are no trespassing signs which were put there by neighbors to keep the homeless out. The dirt jumps themselves sit on the Grotto’s property, and they seem (at least of last summer when I asked) to remain indifferent to bicycles. Have fun and be respectful.
The people from the neighborhood that I have spoken with like having riding there.

I listed all of those groups as area users. You will note below that point, I stated; ” When the bikes were there the homeless, drunks, and druggies weren’t welcome.” I had thought that was enough to draw the distinction in the groups. I do not know about this past summer, but there have been citations issued and bikes confiscated since the “closing”… whatever that means. It is also my understanding that a portion of the jump section, if not most, is on state highway department land. There was no intent to take a shot at rock climbers. You may be a little sensitive.

Actually the jumps at the Grotto have been closed to bikers. I had ridden and dug there for years and while they’re still there if you try to ride or even bring a broom or shovel to make them ridable you’ll be kicked out.. As well as my jumps in Oregon City have just been plowed as well.. Some Bike friendly community

Those pictures of people riding the pump track on road bikes and a folding bike are priceless.

Did the group ride Burnside all the way from downtown to Ventura Park, or did the group move north or south of Burnside on one of the “approved” bike paths through SE Portland? The reason that I ask is that I live adjacent to Ventura park and ride daily to Goose Hollow where I catch the Max and continue my commute West. Burnside is a very logical East-West through way and all the city needs to do is do some re-striping. I was curious whether this group would concur with that opinion? The neighborhood paths are nice if you live in those neighborhoods – but if you live east of 205 like I do – you really want a through way that is bicycle friendly. Burnside would fit the bill with a little help (a low dollar investment).

We rode on Burnside a majority of the way there. Around 70th we dropped down to Thorburn and then down to Washington for the rest of the way.

Thanks BTA for showcasing the work that the NWTA and others in the mountain biking community have done around Portland. Moving forward with the agenda of a world class cycling city, we need to include those that want to ride to where they ride and provide recreational opportunities for all kinds of cyclists.