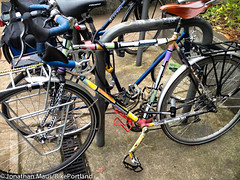 This bike has an interesting backstory.
Read it below…

A few weeks back we kicked off our “Locked Up” column. The column takes a closer look at interesting bikes we find locked up throughout Portland. Our inaugural post featured a creative and quirky touring bike that seemed like it held many secrets and stories. Well it turns out it did: Over the holiday weekend, we received a comment on the post from the bike’s owner.

Read the backstory below…

Before I got the LHT [Surly Long Haul Trucker] frameset, I had a minivan I spray painted every few months to provide the community with changes to look at. The last paint job was a bunch of overlapping squares outlined in black, inspired by imagining my van as a computer monitor full of varying windows consisting of whatever colors I had amassed over the months of painting. When the van’s motor failed at somewhere near 212,000 miles, my father and I replaced it with a spare only to have that fail a few hundred miles in. The van was scrapped, and I was without something to color on.

But then I bought the LHT frame second hand from a friend in early ’08, and I didn’t like the grayish-blue stock color, so I painted it black, taped off some squares, and made a messy color job as an homage to the van, an effort to personalize the bike, and an effort to make it less appealing to people who steal bikes knowing little about them. So the paint job wasn’t inspired at all by anything anybody’s mentioned. I’ve not before heard of Fauvists or De Stijl or Vie Claire or any of that stuff. And while people have told me many times that the van and the bike reminded them of The Partridge Family, I never knew why that was until seeing that picture of the bus in this thread. Still, I think it’s neat that all those names come up.

I built the “Nth” wheel at the back for pulling my bmx bike with me on tours. I so far have only used it to go from eastern South Dakota to Colorado, but it worked very well. A drunk man in Wagner, SD wanted to ride on the bmx, but like jim mentioned above, I told the man I didn’t trust my rack to hold the weight of a man. It isn’t a quick release, though. I wanted to put a quick release on (especially after reading this: http://leastmost.com/features/bike-on-bike-action/), but the only hub shell I had to weld onto the rack was incompatible with the only quick release axle’s cone nuts I had, so I have to break out my 15mm wrench whenever attaching and removing the bmx. That doesn’t bother me, though, because I like a generally slow paced life.

The “E” is from a storm door that was on my family’s old house. “E” is the first letter in our last name. I put it on the bike primarily as a reminder of my family, but also as a reminder of a friend who once in the middle of a ride to town ripped an “I” from a storm door on an abandoned school house in SD and then fastened it to his bike with some wire he found at the same site.

The small badge mentioned in the write up is actually a tree that I removed from an old telephone pole my father used to build a pole shed on his farm last winter while I was back there. I removed multiple, as my dad had purchased many poles, and have slowly been distributing them to close friends I grew up riding bmx bikes with. I carried my tree with me for months before finally deciding to mount it on my rack like a car’s hood ornament. There’s a number on the top of each tree, and the words beneath the hole are as follows:
– Northern
– States
– Tree Service
– Penta Sprayed

The chainstay stickers in the picture came from a set of VHS decals for labeling tapes. I don’t even know where I got them, but I liked their simple aesthetics, and I enjoy working with video, so I put them on to fill the black space that resulted from not wanting to tape and paint the small tubes.

Yes, Dan, it is a Brooks saddle.

I have not named the bike, but that’s only because I don’t name anything. However, naomi is spot on about me loving my bike. I’m thankful to have it.

Jonathan, I love the idea of “Locked Up”. I’m honored my bike has been part of it. I hope you keep the series going for a long time.

Thanks for writing in Caleb. We love your bike and the stories behind it!