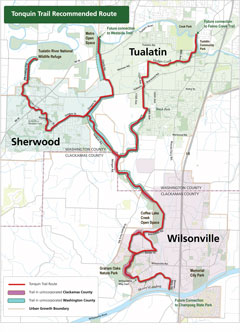 Back in 2006, Metro-area voters approved a natural area bond measure which identified the Tonquin Regional Trail (a series of routes connecting Tigard, Tualatin, Sherwood, and Wilsonville) as a priority for development.

Planning kicked off in 2009 and recently the Project Steering Committee announced the recommended alignment for the trail system.

Their recommendation creates connections (at the north end of the the trail system) with the Westside Trail, Fanno Creek Trail, and Tualatin River National Wildlife Refuge. Winding south from those points the Tonquin Trail continues through Sherwood and Wilsonville, ending near Champoeg State Park.

Committee members and project staff are clear that the Tonquin Regional Trail is designed for more than recreation.

In an announcement of the committee’s recommendation, Metro says that the trail will provide “new ways for people to travel to work, shopping, schools, nature and more.”

This trail system has been in the works for a long time and is regarded as an essential component of making biking and walking more feasible modes of transportation in the southwest Metro region. In 2005 the Bicycle Transportation Alliance named the Tonquin Trail the 5th highest priority project, outranking both the Fanno Creek Trail and Safe Routes to Schools.

Some sections of the trail are already in place and others are on the cusp of construction. One section through Sherwood recently received federal funding.

You can hear more about the Tonquin Trail master plan for yourself at the Wilsonville Transportation System Plan update meeting on January 11th at 5:30pm at Wilsonville City Hall.

Complete information on the plan, including upcoming meetings and a list trail sections which are already built, is on Metro’s Tonquin Trail website.

This is so rad! I’ve lived around these areas at various times and they are in desperate need of safer options for travelling by bike or walking. Many of the roads connecting these sprawling towns have no shoulder and have high vehicle speeds. They are great for riding, but not always very forgiving to casual or amateur vulnerable road users.

Wouldn’t it be nice if these grew out of control, like mycelia, throughout our state…nay, our country?!

“Wouldn’t it be nice if these grew out of control, like mycelia, throughout our state…nay, our country?!”
Yes It would Chris! This is one of the primary reasons we left our home town. Federal funds allocated for MASSIVE greenway expansion, only then to be bottle necked in local political diversions. Tualatin often is the one place around that I seem to experience these most frequent of harsh sneers from fellow road users. Maybe I am just there on bad days?

I’ve ridden in other countries where I could go on a bike ride the equivalent distance of Portland to Corvallis with dedicated bike paths the whole way. It would be incredible to have the same thing here!

Doesn’t it seem a stretch to say that it ends near Champoeg State Park? I mean it stops on the north bank of the Willamette and Champoeg is on the south. Just that small barrier – the river – keeps you from going that last quarter mile.

There’s potentially a bridge over the river in the works. It likely won’t be seen for a while, but it’s in the plans at least.

A good stopgap would be to wall off the shoulder of I-5 in both directions between the Wilsonville Road exit and the Miley Road exit so that bike traffic can ride that stretch with a minimum of debris. It’s currently legal to ride on that stretch of I-5 (about a mile long), and the shoulder is massively wide, but frequently full of debris. A line of K-rails or other solid barrier would prevent debris from drifting over into the shoulder and allowing any cyclists in the interim period to cross the Willamette with a reasonable feeling of safety.

Current conditions are LOUD, but no worse than the I-84 bike path in far NE Portland / Fairview.

It would certainly be loud but it would be awesome to have that connection for bikes.

There’s a path in Eugene next to I-5 and it’s plenty loud but still very useful.

I notice the map says “future connection to Champoeg State Park.” Having bike-camped to Champoeg this past summer with my child, I would love a more car-free way to get there. Just imagine a bike/ped bridge across the Willamette there!