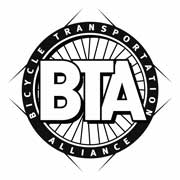 At a press conference this morning the Bicycle Transportation Alliance (BTA) will announce their much-anticipated “top 40 essential projects programs, and policies.” This “Blueprint for Better Biking” was determined from a survey of over 900 Portland cyclists back in spring of 2004.

From that survey, the BTA says 4 main areas of concern emerged:

Taking these concerns into account, the BTA whittled down an initial list of 400 project suggestions down to 40. Among the top 40, they have also designated a “Top 10” of the absolute highest priorities on the list.

The Top 10 Projects are:

You can read the press release and complete list of projects on the BTA’s website. You can also download the full report as a PDF. And remember, this is just a list…the hard part will be moving forward with these projects. I hope you’ll consider helping out the BTA either by volunteering, becoming a member, or by making a donation.

Here’s a question. Who is it that’s teaching our kids to ride there bikes as if they were pedestrians? The majority of the kids I see riding bikes, ride them against traffic as if they were pedestrians. This is the most dangerous way to ride a bike there is. For instance, when a motorist exits a place of business turing right with the flow of traffic, invariably, they look to their left and not to their right before entering the flow of traffic. Why do they do this? Because they don’t excpect anything to be coming from the opposite direction on wheels. How do we get this into the project’s list of priorities?

In case folks are interested, Here’s an OPB story and here’s a KATU piece, with audio and video links. There was a story in the Oregonian this morning too, but I can’t seem to find it online.

Hi Steve. we actually have that particular concern in the Top 40 list, buried in #10, Safe Routes to School.

Kids who ride against traffic either haven’t been told anything, or learn from parents who go under the ancient pedestrian-oriented assumption that riding against traffic is safer – it is not.

Our Bicycle Safety Education courses reach over 4,000 kids per year in Oregon, and our Safe Routes to School program is increasing that number here in Portland and statewide.

Education is a big part of SR2S, and we teach kids to “ride predictably, on the right side of the street, in position 3 (right side of the travel lane), and to watch out for car doors, etc, etc.

Jessica & BTA folk – glad too see the coverage for the Top 40, should help focus efforts & $$$. A question: what’s the dif between #6 (low traffic suburban routes) and #8 (low speed / low volume bikeways) ? They seem identical to me..?

By the way, don’t forget to check out the comments on this topic over at PortlandTransport.com.

Part of the problem that Steve referred to is the lack of attention by motorists. Every motorist should be looking left AND right whenever entering a crosswalk (BEFORE driving into it) or any place a pedestrian could be. If they’re looking for pedestrians, they’re sure to see riders on bikes. Young kids riding little bikes would not go much faster than a pedestrian.