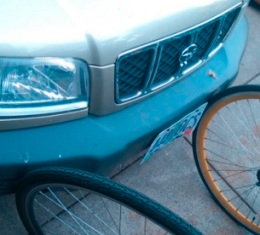 A bad situation made good.
(Photos by Craig Harlow)

Welcome to the first post in a new series we’re calling ‘Positive Spin’.

Every now and again I get emails from readers with warm and fuzzy stories or I come across them on the various email lists I subscribe to. Recently, someone asked if there was anywhere on BikePortland where people could post good news or positive interactions they have with other people — whether it be out on the streets or otherwise. There wasn’t. So, after thinking it over and coming across what I thought would make a great opening story, here we are.

The story below was posted to the Active Right of Way (AROW, a local transportation advocacy group) email list by citizen activist Russ Willis with the subject line of “thanks, Craig”.

A few weeks ago I was coming out of the library at NE 15th and Fremont, and I ran into Craig Harlow standing near the bike rack at the north end of the sidewalk that fronts the Whole Foods [market] there. You know, the rack that is placed much too close to the two parking spaces there that are designated for “compact” cars. 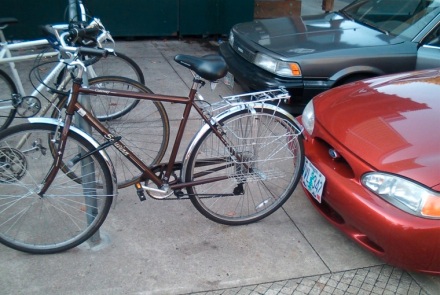 As often happens, there was a car parked there with its front bumper jammed up against the wheel of a bike tied to that rack. Craig was writing a note to the driver of the car, though it was not his bike. Each of us had seen several repetitions of this situation, and we agreed that the rack was essentially unusable. 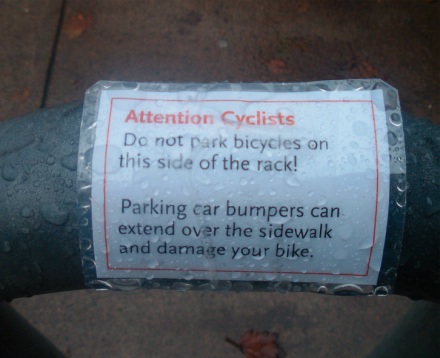 Apparently Craig had talked with someone at Whole Foods, and they had said they were going to reconfigure something or other as a part of their remodeling, and the rack would be moved. While we were talking, the driver turned up, and Craig had a direct conversation with her, which I did not overhear.

The next time I visited the library, there were labels taped to the rack, warning bicyclists of the risk. I assumed this was Craig’s work. And better yet, the next time after that, there were concrete wheel blocks at the front of each of the parking spaces, preventing cars from parking that close to the rack. Problem solved. 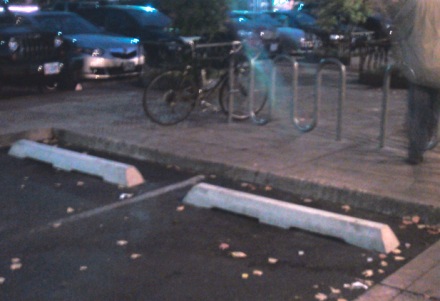 I have to think this was the work of Craig Harlow, so I am giving him a shout out… to say, “Thanks, Craig.”

Yes, it was the work of Mr. Harlow, who happens to be a dedicated citizen advocate for bicycling. He is/was Chair of the Lloyd District Bikeway Development Projects Stakeholder Advisory Committee. And, as it turns out, an activist for better bike parking in Northeast Portland.

This is a great example of someone taking on an issue and finding a solution through a bit of leg work and persistence. Craig gives credit to a Whole Foods employee who pushed the issue to management and ultimately to Patty Richards, team leader at the Fremont store for “making these changes happen.”

“The whole thing took several inquiries up the Whole Foods chain (and a few damaged wheels) over a couple of months in order to get it into their priorities,” remarked Craig, “but they came through.”

— If you have some good news to share — whether it’s appreciation for someone who makes a difference in our community, a small gesture or interaction you witness, or whatever — drop us a line and we’ll consider featuring it in an upcoming edition of Positive Spin. And, as always, let us know what you think about this new column.

Hurray for Craig! That spot, which is between the Albina library branch and Whole Foods and pretty busy with foot traffic, is tricky with the bikes, cars, and bottle return machine (which makes it reek of beer all the time anyway). This solution makes a little more space for everyone.

wow, you never consistently see people parking up against other vehicles like that… how weird… and how very discourteous to the bicycles…

If I had a dollar for every awful parking job I’ve seen… people have no respect for the property of others, it would seem!

Kudos to these folks for working with Whole Foods to find a good solution.

awesome way to come together and help eachother, see way to many ppl just infighting as cyclists.

Well done Craig. Jonathan–I LOVE this new feature, good news. Moving recently from a much less bike friendly town, I often feel the comments on this site highlight how far from perfect PDX is, while rarely recognizing how close we are. Keep it up. I ride a kid from the SE to school in the SW and back to work downtown everyday and I have huge gratitude for the bike infrastructure and community here.

Thanks for the post, Jonathan. I was so happy to see Craig getting some recognition. Thanks for all your hard work, Craig, and the thoughtful, positive way you approach problems.

Seems like it would be a good plan to replace this obsolete MUNI rack with a series of bike staples placed more appropriately.

They said they plan to re-do bike parking when they do a complete makeover of the sidewalk in 2012.

A bicycle parking space is 3 feet wide. A wave rack space is 10 inches wide. The typical automobile space is 96 inches wide. If they striped automobile spaces 27 inches wide by accident, how much you wanna bet they’d have pavement grinders and striping machines removing the old lines and putting them at the proper length before the week’s out?

The “wave” rack is one of the prime problems of poor bike parking layout for many developments. Please please PBOT stop permitting the use of this bike rack.

This one happens to be privately owned.

That doesn’t mean there aren’t engineering recommendations in play.

If this rack was installed through the City’s Transportation Development Review process …why does the review process not pick up this problem in design? And if it does, then why are we seeing these problems built?!

This is basic parking lot and pedestrian circulation/ safety design 101…assuming you control for the rack type and inspect what is built as compared to the approved plans.

I’m with Racer X. What’s up with all the badly installed bike racks one sees in so many locations. Maybe we should start taking photos of all of them and post them somewhere. As Paul Johnson said above, if car parking was similarly unusable, you bet it would get fixed-pronto. Or, more likely, done right in the first place.

Thank you Whole Foods for listening and thank you Craig for being constructive and persistent.

All for the sake of a couple of concrete parking stops.

Just need more of these solutions where everybody wins!

Thanks for this venue, Jonathan. Great idea!

Wait, A FEW damaged bikes? How many bikes were smashed for this to become a priority for Whole Foods? Pretty sure if “a few” cars were being damaged something would have gotten done a lot quicker. Thought for a corporation committed to union busting, denying global warming, and opposed to universal health care, I guess we should be happy they did anything for bikes at all.

they should have taken out those two car spaces entirely and made a covered bike corral like they have at the Laurelhurst Whole Foods. . .

I like the idea of bringing awareness to positive things that are going on in the community. There’s a lot to be thankful for and by writing about it, you’ll get more people recognizing the opportunities that exist.

“Positive Spin” is a great feature to add and this blog really needed it. Not that there isn’t any problems or room for improvement in the PDX bike scene, but there is a lot of good happening out there too.

A few months ago, at the exact same spot, I was in the middle of writing a note to leave on a car that was pushing a bike locked on the rack, when, lo and behold, another driver, sped up to park and bashed another bike on the same rack. When I chastised the driver about it he thought I was being unreasonable. I said, so you think it is okay to just go around hitting people’s bikes?