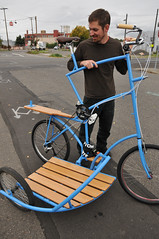 With Freak Bike Fall kicking off tonight I thought it’d be fun to take a look at a creation from one of Portland’s most talented freak bike builders.

30-year-old Jake Ryder (a.k.a. “J-Ryde”) has only lived in Portland for two years, but he used to visit so often while living in Seattle that it seems like he’s lived here longer. He’s also tends to make quite an impression.

Ryder is a talented maker of many things. He designs and builds everything from event posters to furniture (which is how he pays the bills) — and of course freak bikes.

You might recall seeing Ryder grace these pages after he won the 2010 Mini Bike Winter Chariot Wars as pilot of his Sexxon Chariot (a play on Exxon). I’ve also caught him riding his very nice FR808 cargo/sound-system bike.

His bikes have always caught my eye, but his latest creation really takes it to the next level. 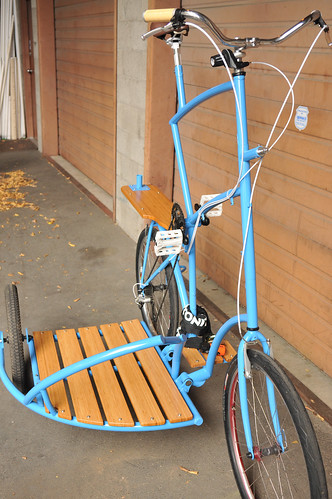 This clean and custom tall bike will be used as a rolling photo studio. (Notice the grip-shifter near the stem!).

Professional photographer Dabe Alan commissioned Ryder to build him a tall bike. Alan has a great eye for capturing urban culture and he has recently become very interested in Portland’s photogenic bike scene.

“Dabe wanted to be able to take pictures from the bike,” Ryder explained to me when I visited his workshop in Southeast Portland today, “He also wanted to mount lights and make it sort of a rolling photo studio.”

Alan wanted a tall bike for its high vantage point, both to shoot photos from and as a platform to attach his various lighting equipment. The bike has attachments for light poles and tripods on the rear rack and on the head tube. 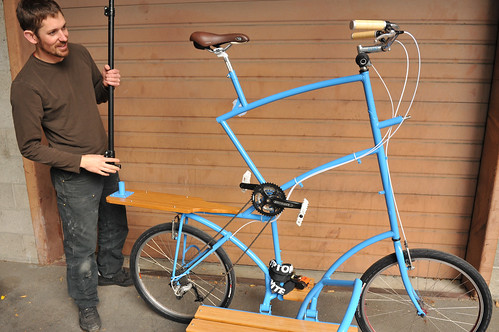 Ryder detaches the light mount from the rear rack. 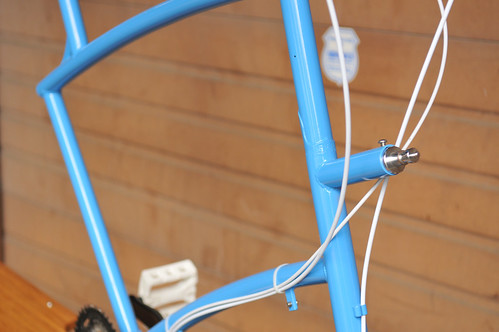 Alan’s tall bike also needed to carry equipment and be balanced and stable. That’s how the sidecar idea came about. 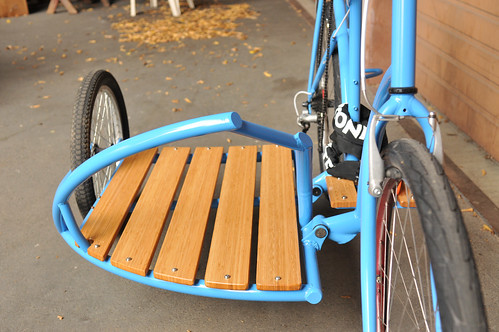 “We went through a couple of kickstands and training wheel ideas and ultimately ended up with a sidecar.”

The sidecar has an inlaid bamboo floor and bars to keep cargo and passengers in. Showing his creativity and keen sense of how bikes work, Ryder also made the sidecar pivot. To accomplish this, Ryder attached the sidecar via two pivots taken from the swingarms of old mountain bikes. An added bonus of the sidecar is that it’s detachable.

“You can lean into it and out of it and it tracks perfectly.” 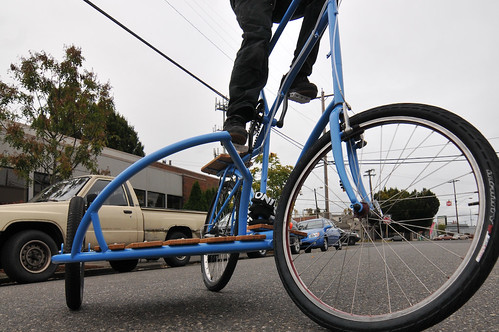 Notice how the sidecar tracks along with the turning bike.

During a test ride, I stood in the sidecar as Ryder pedaled. It was very stable (even in turns). I felt comfortable not holding on even managed to snap a few photos… 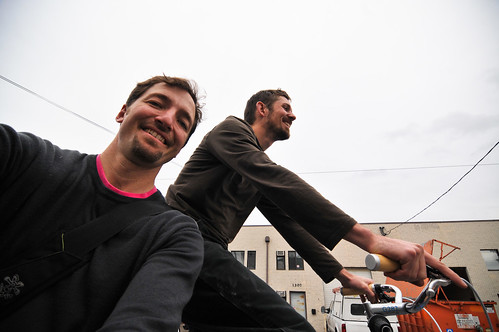 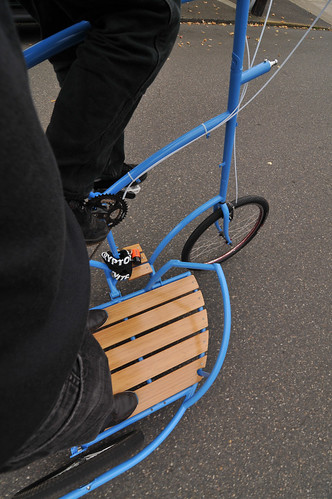 Bamboo was used for the rear rack, the floor of the sidecar and for a nifty flash/camera battery holder platform near the bottom bracket.

Ryder says he loves the creative process of building bikes. He’s also excited about the inspiration loop that happens whenever a new one comes out. “I really like how stuff can spread online and how it inspires bike culture around the world.” While inspiring others to build bikes is one of Ryder’s favorite outcomes of these projects, he also freely admits that much of what you see in his designs were sampled from others. 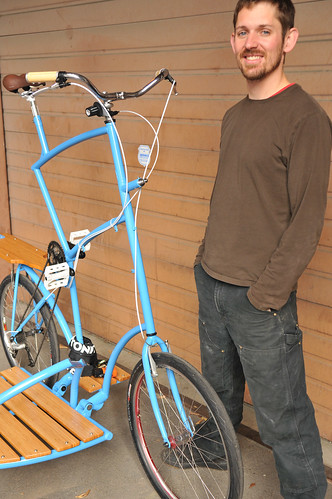 Ryder offers custom bike making services, but for now he still relies on his furniture business to pay the bills. “It’s a fun process and a nice break from making furniture.”

— Learn more about Jake Ryder and see his work at JRydeVisuals.com. Like this series? Read our last one on Johnnie Olivan.

Man, that would be an awesome bike if it wasn’t a tall-bike.

I, too, wish that it was a recumbent.

Mainstreaming tall bikes?! (I love it.)

Did you take a video?

I love the sidecar and rolling studio ideas.

That is awesome! Why didn’t we see that in the Oregon Manifest?

Such an amazing ride!

So Awesome, way to go Jake!

actually ive been waiting for the pivoting side hack for a long time, thanks Jryde

That’s amazing! My fiancee and I are planning a bike wedding parade. We are trying to figure out the photo/video possibilities 🙂 We were thinking tandem for the photog, but this looks awesome!

Really cool bike. I used to haul my gear to shoots by bike but I think the vibrations would always be knocking lenses etc out of alignment? It seems like I was always having to send stuff in for recalibration.

Forgive my ignorance but other than the elevated danger factor and sheer vanity, what is the argument for tall bikes?

I’ll only argue for “Bike Fun”. I support everyone riding what they love to ride. Whatever makes you happy to be out pedaling is what matters most. However it may look.
But just in case that answer isn’t quite what you were looking for, since THIS bike was intended to be a mobile photo studio it was important to have the lights securely mounted at or above head level, and to elevate the rider’s vantage point for taking photos while riding in a group setting. So, we made it tall.

Hey thanks everyone for your compliments and kind thoughts. Hopefully everyone was able to see it while it was out and about over the Freak Bike Fall weekend. If not there will certainly be more opportunities to see it around Portland in the coming months. Happy riding!

two things 1 the idea of converting a 2 wheel to 3 wheel and back is useful in and of itself. 2 in a recumbent one could add a sail over the 3rd wheel