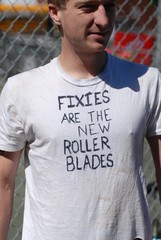 Scientific American has unearthed an amazing bit of bike history from their archives that shows the popularity of fixed-gear freestyle is nothing new.

In a blog post on Friday, the magazine shared images from an article they ran in 1899 featuring “two well-known trick riders,” N.C. Kaufman of Rochester, NY and Lee Richardson of Milwaukee, WI. As I looked at the images, I was struck by how similar Mr. Kaufman’s moves were to what I’ve seen by some of our local trick riders.

As I’ve shared in stories from 2010 and in 2008, urban trick riding is alive and well in Portland; but I never would have expected that these young riders were simply carrying on a proud tradition started in the 19th century! 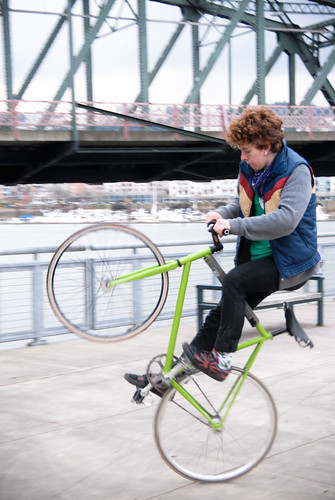 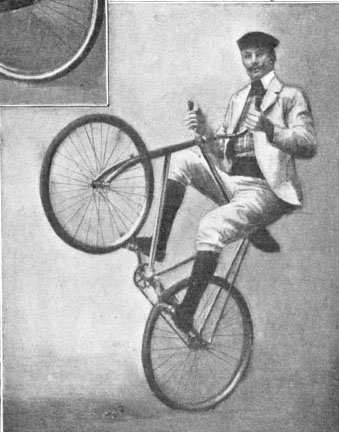 I guess this puts the whole, “Fixies are the new rollerblades” thing to rest. Right?

Almost everything in cycling was discovered, invented or done first in the 1890s.

Inline roller skates have been around since 1760, and were mass produced in the US starting in the 1880s as well.

In Europe it’s called “artistic cycling,” and has never gone away; it’s a kind of gymnastics/dance with established rules and competitions.

This type of cycling is also widely featured in Europe in small circuses.

I remember calling that kind of stuff “Freestylin'” when I was a teen in the 80’s. If anything, I thought the fixed gear trick riders of today were just imitiating that.

jeez, next you’ll be telling us that tall bikes were invented in the late 1800’s…

Sure… They were 58 and 62 inch Penny Farthings.

Major Taylor was a quite good trick rider… Among other things..

And tall bikes were invented in the 1800’s .. called the High Wheeler…

pennyfathings, blah blah… whatever you call them they’re not the tall bikes i was refering to…

Yeah, they are way sexier.

FIxies are still the new rollerblades. If these fixie dudes had any sense or talent they would be riding bmx, DJ or trials bikes. Ya know, bikes that make sense for the sort of thing they’re doing. Just like rollerbladers with any athleticism would be riding skateboards. Boom.

Well U.M. … Some folks dont have a budget for a quiver of bikes, so having a fixie sturdy enuff to do a few tricks on on your way to the bar makes alot of sense. Dont forget that within your one sided view, you excluded some chicks who I have seen do some cool effin’ moves on 700c wheels.

Oh and I forgot… Bam!

YESSSSSS! As a curmudgeon skater I have to agree. BOOM indeed. I mean who else in this world can we make fun of – hicks, the french, rollerbladers and fixed gear riders.

To the extent that all bike handling skills are a matter of style, I think that some people just pick better equipment. I have seen some sweet tricks on wheelchairs, which are also “fixed”.

If you have not seen him already – google Danny MacAskill to witness some of the most amazing feats of bike control ever. There is a reason that he rides a trials bike and not a fixie, though I am sure he could easily pull some wicked elephant trunk skids if he wanted to…

Danny MacA. may be the single best bike handler ever to ride the face of this planet. IMO. (with a nod to your style point of course.)

I don’t know if “fixies are the new Rollerblades” is supposed to be a slam on fixies or Rollerblades… but it should be.

That comment is hypocritical, but at least it’s because there’s a fixie in my quiver.

the guy in the 1899 photo.. one of Dan Kaufman (of Crank my Chain) forebearers?

John Cardiel, Julien Stranger, HUF, Matt Rodriquez, Stefan Janoski, Jovante Turner… all well respected professional skateboarders who ride fixed. Are you going to tell them to their faces that by doing so they are comparable to rollerbladers? (Next time they swing by Burnside, let ’em know you were the hater talking shit online.)

Here’s an idea: instead of whining about what type of bike someone gets enjoyment out of riding, why don’t you haters let people (i.e. your fellow bicyclists) just be and shelve your negative/insecure shit? It’s old, it’s tired and it’s a total fuckin’ cliche (“Haters Are The New Rollerblades”?) I know it’s hard to believe, but there are people out there who like things you don’t, and no amount of alienating, wannabe-BikeSnobNYC snarkiness is going to change that. Deal with it, get over yourselves and ride YOUR fuckin’ bikes!

“jeez, next you’ll be telling us that tall bikes were invented in the late 1800’s…”

Which of course, they were. Interested parties can google “lamplighter bikes”.