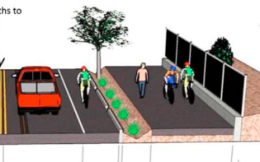 Cross-section of proposed project
that would link the Springwater
to the Trolley Trail in Milwaukie.

While much of the media attention for the current round of Metro’s regional flexible funding allocation revolved around the Portland bike sharing project, there are a host of other (extremely important) projects and programs that have been selected.

Metro is accepting public comments on all the projects until 5:00 pm on October 13th. Metro wants to know, not simply whether or not you support a project, but how you’d like to see it implemented.

Know of a way PBOT should improve their bike share plans?
What key routes is PBOT missing in their East Portland Active Transportation to Transit project?
What should the City of Milwaukie keep in mind with their 17th Ave multi-use path project that will connect the Trolley Trail with the Springwater Trail?

Metro’s Dylan Rivera says that all the projects are “at an early stage of development when community input can have a big influence on what the cities build.”

I think BikePortland readers are some of the smartest transportation folks around, so I hope many of you take a few minutes to weigh in.

Each project has its own page and comment submission form. You can comment online at OregonMetro.gov/FlexibleFundComment. Remember, you only have until this Thursday, October 13th to comment.

The city of M has a “planning” booth at the Milwaukie farmers market. They told me about the 17th ave connector project. That’s awesome !

Thanks for posting this article!