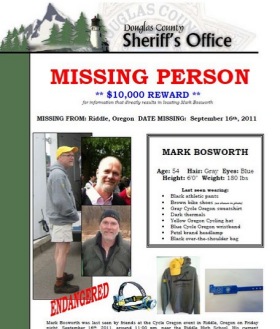 Even after the large-scale, volunteer search effort in the Riddle area was downsized yesterday (not “called off” like I initially reported), the search for Mark Bosworth continues.

It’s now been six days since Mark was last seen at a Cycle Oregon campsite in Riddle. The big development yesterday was the offer of a $10,000 reward for information leading to his discovery.

More about the reward and the latest on the search below…


“We have reason to believe my dad is out there somewhere traveling and may be disoriented and confused and it is very possible he went to Portland.”
— Kelly Bosworth

Douglas County officials sent a large contingent of volunteer searchers home yesterday; but the effort to find Mark is as urgent as ever. Cycle Oregon ride director Jerry Norquist told me this morning that the community of Riddle — who have shown amazing dedication throughout this ordeal — haven’t forgotten him. “The community hasn’t given up. They plan to get the search crews together again on Saturday to give it one more shot.” 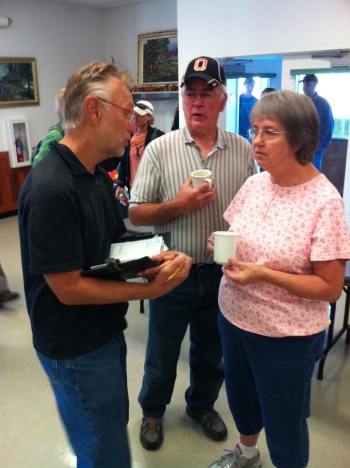 Norquist said the large turnout of volunteers on Tuesday and Wednesday allowed officials to search many areas several times. Norquist himself is leaving no stone unturned: “Mark was last seen near the shower trucks [mobile water semi-trucks that follow the Cycle Oregon ride], so I had someone call the truck company and look inside one last time.”

With the roads and lands near Riddle thoroughly searched, some of the attention has shifted to Portland.

“If you are interested in helping us find my dad, please print this poster and put it up around your neighborhood. We have reason to believe my dad is out there somewhere traveling and may be disoriented and confused and it is very possible he went to Portland. Getting his face out there is the best way for us to get him back home. Thank you so much.”

In a statement, Deckers CEO Angel Martinez said, “Mark is part of our family… We want to help find him and support Julie in any way we can.”

The $10,000 will go to anyone who can either locate or provide information that leads to Mark’s discovery.

There’s also an intensified effort to distribute the official missing person flyer far beyond Riddle, Portland, and even Oregon. This is because, as it has been reported since the search began, many fear that Mark’s might be suffering from a diminished mental state due to his ongoing battle with cancer. If he was confused or incoherent, he could have done anything and he could be anywhere (especially if reports that he was seen hitchhiking are true).

The Douglas County Sheriff’s Office is maintaining a blog where the missing person flyer and the latest information on the search is posted. Please bookmark and share FindMarkBosworth.Blogspot.com.

— See my Mark Bosworth story tag for past coverage.

Has there been an effort made to distribute flyers to emergency rooms through out CA, OR, WA?

I’m praying that he is found soon and well.

Did they have the Port-a-Potty people check every one of their units? There were a lot of “blue rooms”, and a perpetually-locked one might have gone unnoticed.

I cannot say enough about the support and hospitality of the residents of Riddle. Riddle is a mill town that appears to be struggling with the economic downturn. They came up with tremendous support for the searchers and Marks family even though i’m sure it hurt. They would take no donations to offset the costs and in fact offered more. “You can come pick them up but you can’t pay for them” was what one shop keeper told a volunteer about boxes of fresh produce. I thank them from the bottom of my heart. -JH

Thank you Jonathan and BikePortland.org for your continuing coverage of the search for my dad. And, to answer the above comments, emergency rooms throughout OR, WA, and CA have been notified and have my dad’s name and description. All the Port-a-Potty units were checked twice over. We appreciate everyone thinking outside the box and sharing their ideas. Stay aware of people you pass by and get active in the search efforts in your community! Thank you so much.

Kelly I take it the wooded area south of the baseball diamond in Riddle and that area of the river was all searched really well? Is the terrain steep near the river?

There’s a new website with information about the search for Mark. http://www.FindMark.org. Please download the flyer and post some up as you’re out and about this weekend. The more people keeping an eye out for Mark, the sooner we get him home to his loved ones! Thanks!