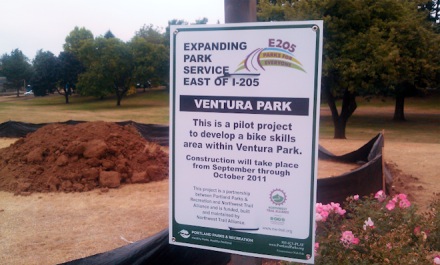 Portland might have a glaring lack of off-road singletrack trails, but the outlook for pump tracks and skills parks is looking very bright.

Today, Portland Parks & Recreation delivered truckloads of dirt to Ventura Park (SE 116th and Stark), which will soon be the sight of our city’s first pump track. The project is part of Parks Commissioner Nick Fish’s E205 Initiative, which seeks to develop parks and open spaces east of I-205 in neighborhoods that haven’t historically gotten City Hall’s attention.

The Ventura Park pump track is a partnership between the City of Portland and the non-profit Northwest Trail Alliance (NWTA). While the Parks Bureau is funding a portion of the costs associated with the track, NWTA is footing the bill for ongoing maintenance, management, and operations of the facility.

For NWTA, improved trail access for bikes in Forest Park and other large natural areas is the ultimate prize, but Tom Archer, the organization’s president, says they’re very excited to get to work on this pump track.

“We haven’t given up on the larger vision of trying to get more singletrack in the city,” Archer told me via phone today, “but we’re taking advantage of any opportunities we can right now and this is what’s in front of us.”

Archer added that the Ventura Park pump track is still considered a “demonstration project” by the Parks Bureau and the NWTA is operating under a temporary, one-year permit with an evaluation clause at the end. Far from concerned about getting the permit renewed, Archer says he’s confident that the pump track “will prove very popular.” 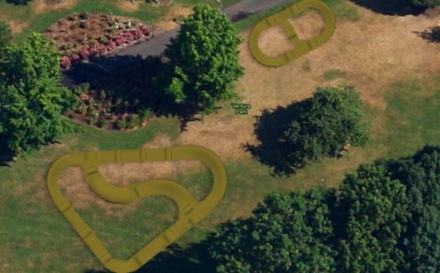 Aerial of the park with artist renderings of pump tracks.

Unlike the refurbished track the NWTA just completed at Eichler Park in Beaverton, Archer says the Ventura Park facility won’t include any jumps. It will be a pure pump track, with smooth rollers, rhythm sections, and berms. Two distinct tracks will be built, a “kiddie track,” and a larger track for adult, intermediate and advanced riders.

If all goes according to plan, the new pump track will be open for riding the first week in October. Archer says they’ll have folks out building the track this weekend and they’ll announce larger, public work parties at the end of this month. “We want to get a jump on this so we can get riding before the rains come.”

For more information, visit the City’s official project website and stay tuned for more announcement from the NWTA.

Credit where credit it due: Commissioner Fish deserves some credit for this, and, though I’d not heard of it before, the E205 initiative sounds like a great idea.

It’s a bit far for me to go out there (I live much closer to FOREST PARK), but there are lots and lots of kids out that way that have BMX bikes or small mountain bikes, and this is a great way to keep them occupied and not obese!

Ventura is right off the MAX, so ride the train and pedal on over!

Yay!!! And in my hood, on the way home from work every day. Nice!

We’re extremely excited to kick off this project and get some laps in before the rains come! We’ll be kicking things off with a small work party this sunday (9/18) from 10-4. Come by and check it out, or bring a shovel and help dig! More work parties planned soon.

Awesome…! Hopefully this one will be a little easier to ride than the Whistler one above the Boneyard. That one is tough…

Yep, this one will be rideable by all. We’re keeping it simple.

Talking about giving credit where credit is due — that looks like the photo I took, then passed on to Tom Archer.