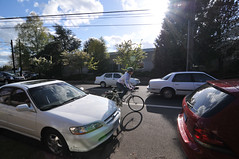 There are some new developments in the project to improve bicycling and traffic safety on N. Williams Avenue.

Following the most recent Stakeholder Advisory Committee meeting on August 2nd, project staff have announced that in lieu of a September meeting, they will host two tours of the street in order to give SAC members (and the public) a first-hand look at existing conditions.

“You must have some guiding principles to frame the way that you move forward. It must be right, it must be just, and it must be fair. This is about building the community that serves the needs of all.”
— Avel Gordly, former Oregon State Representative and current black studies professor at PSU

The Community Forum to discuss the broader social issues of racism and gentrification that have come up during the Williams project that was tentatively scheduled for September has been pushed back until October. In an email to stakeholders, Poyourow said more time is needed to coordinate schedules with “decision makers at the City” who have expressed interest in attending. “We want to make sure this is really a productive, positive event,” Poyourow wrote, “so I hope you agree it’s worth taking the time to get it right.”

For those of you who are following this project closely, the most recent SAC meeting minutes (from 8/2 meeting) have been published (links to PDF).

Judging from the meeting minutes (I wasn’t there), it’s clear that the public process around this project has essentially started anew. Even though the SAC first met eight months ago, concerns about an under-representation of African Americans on the committee and misgivings from local residents who weren’t comfortable with the pace or the potential outcome of the project, forced PBOT to hit the pause button.

PBOT project manager Ellen Vanderslice acknowledges the previous work put in by the original SAC members and said (via meeting minutes) she, “doesn’t want the existing committee to get discouraged with these changes.”

As for whether or not the discussion of how to fix Williams is starting with a clean slate, Vanderslice noted that, “The expanded committee will revisit some questions.” Vanderslice didn’t say how long the process would take, but promised it “will not go on forever.”

However the project progresses, it will be done with a much greater focus on how the changes on the street impact the social issues that define the surrounding neighborhood.

At the last SAC meeting, noted politician and current professor of black studies at Portland State University Avel Gordly shared her thoughts. Gordly implored SAC members to consider the long-term impacts of their decision. Here’s an excerpt from her comments (taken from the meeting minutes):

“You’re going to make decisions that inform public policy for years to come. You must have some guiding principles for your decision making. You must act in a way that is right, and just and fair.

… I’ve lived here for 64 years, and I’ve seen some things that are not right, and not just and not fair. You need to keep asking questions about public policy, and whose interests are being served. Ask who is making the assumptions.

… You must have some guiding principles to frame the way that you move forward. It must be right, it must be just, and it must be fair. This is about building the community that serves the needs of all.”

— Browse the BikePortland archives for complete coverage of the Williams Ave project.

Avel Gordly ( and other black residents ) do not oppose the project. The would approve of the project if their goals and perspective were added to the project. You have to build consensus, you can’t just rush to count 50% of a vote in some meeting. That’s why we have history like “lost black neighborhoods” and “Bleeding Albina”. Google them.

That’s why there have been community meetings and and SAC board. And the finding of those meetings has been that several black community members don’t want this plan to go through. So. . . that’s their goal, and that’s their perspective. Acknowledged. Now, can we get back to the transportation safety planning?

Though when planning for bikeway/ pedestrian projects, one always wonders if the hoops for process are more frequent than those triggered for car capacity (concurrency) projects.

only two comments so far? do people know this is about Williams, or have people already said all there is to say?

i don’t believe there is any chance in swaying anyone on this. what else is there to say?

I see that Jonathan is just as bitter as the long term residents. There are quotes from both sides that question the motives of the other side. We should cancel the tour and have a party or anything to build a sense of “we are in this together”.

The neighborhood goals: safety – parking – not mixing with bikes, removal of racist exclusion in plans – no major delays in getting to home.work.church

Cyclist goals: safety – not mixing with cars or busses, no major delays in getting to home.work.church

It does seem they ( 1-20 people ) would risk the safety of their own neighborhood in order to see the goals of cyclists vetoed. The question is why?

The extra time to dialog and plan means that people can’t veto consensus. They have to speak their concerns and the plan will adjust to those concerns. If they can’t put their concerns into words, then it’s pretty clear they are just feeling resentment, and not feeling cooperation.

Many neighborhood residents have family members who’ve moved out into the “numbers” (avenues in the 100s and 200s) or to the ‘Couve. The folks who moved out are still very much a part of the community, except they’re more likely to drive than to walk or bike to visit family, the barber shop, or church. I love bashing Vantucky as much as the average smug BikePortland reader, but the fact is that despite increased transportation costs, people are moving out because housing costs are lower.

what is missing from this process, and what has been missing from the beginning, is any proactive effort on the part of the SAC to organize themselves and frame a decisionmaking process. there have been black residents on the committee from day one, including ms. leopold hutchins, who has now been designated chair, though not by the membership of the committee. they have sat through four or five or however many presentations from PBoT and ALTA and yes, individuals have given their feedback, but there still is no mechanism in place for the SAC to “approve” or “disapprove” any proposal, and there is no mechanism in place for the SAC to “propose” its own solutions. i will again suggest, as i suggested at the very first meeting of the SAC, that you establish communications links among one another so you can talk about this stuff more frequently and in more depth than for an hour and a half once a month, and that you agree on a decisionmaking process, preferably consensus or consensus minus one.

At that meeting I raised my concern that safety should be first, and the last priority should be the concerns of residents of Vancouver who will use this to reach the old CRC or new CRC.