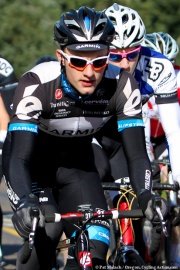 He’s the local bike racer we caught up with three years ago (when he was just 17) prior to racing in the Junior World Championships in South Africa for Team USA.

Rathe, now 20, has moved far beyond the Junior ranks. One day after taking a stage win at the Volta a Portugal on Saturday, news broke that Rathe had signed a one year contract with the Garmin-Cervelo — one of only three UCI World Tour teams based in the U.S. That’s not some under-23 or junior development squad; that’s Garmin’s “A-squad” (as one insider put it) that finished first in the team competition at this year’s Tour de France. 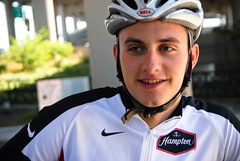 Rathe, who started his racing career with the Beaverton Bicycle Club, will spend a year racing alongside the biggest names in the sport.

According to local race reporter Pat Malach of Oregon Cycling Action, it was the way Rathe won on Saturday, not just the victory, that raised eyebrows. “The Volta is a big, mid-level European pro race and he beat an impressive European field,” Malach shared via email, “And the way Jacob won, getting into an opportunistic nine-rider breakaway after suffering for days in the mountain stages that decided the overall, proved tactically smart. He also won a very tactical sprint from that group that required a great deal of patience and perfect timing after 109 miles of racing… he proved he’s ready for the big show.”

Here’s the video from the finish of that stage which shows not only Rathe’s exciting sprint victory, but gives you a sense of how big the race was.


Oregon Bicycle Racing Association Executive Director Kenji Sugahara says Rathe’s rise is, “Like in baseball — going from bush leagues all the way to the majors.”

Sugahara, says it’s also a testament to OBRA’s supportive community and successful programs. “But it goes beyond OBRA,” he added, “It shows that we have a great biking culture in Oregon that we can all be proud of. It shows that we can produce world class athletes in a state with a smaller population than most. It shows that the more cyclists there are — the more racers there will be — and the higher likelihood that we can find and nurture these phenoms.” (Sugahara is also a Bicycle Transportation Alliance (BTA) board member.)

Speaking of phenoms, Sugahara says we should also keep our eyes on Bend residents (and brothers) Ian and Austin Boswell and Colby Wait-Molyneux of Portland, three other rising racing stars.

Stay tuned for updates from what I hope to be Rathe’s successful season on Garmin-Cervelo. Go Jacob!

Congrats! Add Rathe to the list of great pros who moved here (Horner and Craig, for example), and we’re starting to get a nice contingency going. We’ll probably never rival Colorado or California (not enough elevation, I’d guess), but we’re looking good.

Couldn’t happen to a nicer guy, and a classy racer too.

I’m curious about how the resident racers handle the winter — do they all go elsewhere for winter training?

depends on the racer and their bank account. but yes, many go south for awhile. or shared apts. in Europe (eg. Spain). Horner lives between Bend and So. Cal. Some go to Hawaii, etc.

How has this story not received more comments?! I remember reading the story you posted about this guy years ago – just goes to show hard work pays off. Very proud of him.

My wife and I took Jake down to Sea Otter about six years ago. He won the circuit race at Laguna Seca on a solo breakaway. He was so far ahead the announcers thought he was (almost a) lapped rider. After the circuit race he said “I want to go pre-ride the (25 mile) XC course.” So we did. On Sunday he raced the XC and won by ten minutes.
Back when I raced CX and mtn in the Portland area a lot I always knew how well I was doing by how long it took Jake (starting later in the Jr class) to pass me. Usually it wasn’t long.
Ride well and ride fast, Jake. And keep the rubber side down.

Late to the party, but this is super awesome. Best of luck to Jacob! What a cool team to ride for.

Jacob and I share the same last name, but we’ve never met. For the last 6 or 7 years everytime I buy something in a bike shop the cashier would say “are you related to Jacob Rathe” I looked him up and have been following him ever since. It’s been cool to follow a rising star. Hopefully we’ll be following him in the peloton in France soon.. Congrats Jacob!

You’re supposed to say you are related to him. That’s when items mysteriously start vanishing from your receipt, accompanied with a ‘See you soon!’

watch your back Jacob, Jonathan Vaughters seems to be trying to become the king of mistreating riders…