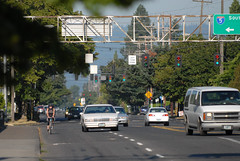 The project was on a list of five languishing projects that I detailed back in August 2010 and it has been delayed numerous times for a variety of reasons (one complication is that the project crosses I-5 freeway onramps and an overpass, so ODOT must review and sign-off on the City’s plans). Work on the project started in earnest back in June, but has been delayed once again.

I asked PBOT project manager Winston Sandino for an update. He says many key pieces of the project — like underground electrical work, sidewalks, and ADA ramps — are already done. At this point, PBOT is waiting on delivery of the new traffic signals. “Once the signals have been installed,” writes Sandino via email, “then we will change the striping and build the islands. We are expecting the project to be completed by the end of August.”

The new bikeway will make a key connection between existing bikeways on Williams/Vancouver Avenues and on Rosa Parks west of Interstate. PBOT will re-allocate roadway space, providing more room for bicycle traffic, and they will re-configure several intersections and signals to improve safety. For more on what’s in store, read my report on the project from back in April.

Magnifique! Not only fine for the sake of commuting convenience, but also a huge addition for those of us who tour the city on weekends.

Speaking of updates, does anyone know the status of the ‘trolley trail’? Isn’t that scheduled to open this summer or fall?

This is great news! Way to go PBOT. Thanks for connecting our network of bicycle friendly streets. This particular improved roadway is much needed.

I’m hoping the signal that supposed to be installed on the SE Bush Bike Blvd. at 122nd is part of the shipment. That project hasn’t had any activity since the last of the speed bumps were installed in June. None of the intersection improvements have been started. The sharrows and speed bumps are nice, but the one key thing for that blvd is the signal at 122nd.

velowocky
Speaking of updates, does anyone know the status of the ‘trolley trail’? Isn’t that scheduled to open this summer or fall?

i saw the trolley trail in mid July… they barely started… they said to be done at the end of this year. I am not so sure… I plan to revisit there soon.

so odd that the city’s namesake street, Portland Blvd, would go so long without bicycle improvements…

middle of the road guy
Reply to  Spiffy

She is Portland’s ineffective attempt to show how ‘diverse’ it is.

Some minor repairs will need to be made when PBOT declares this “finished”. The lights should be better adjusted for pedestrians on the SW Corner headed Northbound. . You have to wait about 4 minutes to go about 75 feet. You wait a bit for the walk signal, then go 25 feet and can’t complete the crossing. It takes 2 full phases of the traffic lights. There should be a button, that when pressed gives more time. This button exists at Rosa and MLK. If nobody pressed the button there is less time for peds to cross the street.

It looks like they were working on the signals earlier today

Pleased to see it move forward. I bike this route nearly every day.

Before you all get all excited, Have you seen Jonathans pictures of the Cully bikeway? It’s not straight at all, It wiggles back and forth around the bioswales and poop.
I would guess it would be better to have some straight lines painted on the road as it is. Then you can crank along at full speed and not have to swerve all the way down a road that looks like it was designed by a drunken centerline painter.
This would also be a lot less money, so money could be spent on more bike projects in more parts of the city.