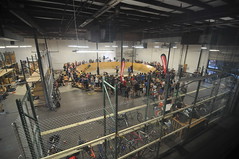 Circulus will go from a Portland
warehouse to the international gaze
of Interbike in Las Vegas.

Lots of news on the bike industry front of late. Not only are local companies continuing to make waves nationally, but there’s quite a bit of buzz and attention for bumping up manufacturing of bikes and parts in Portland. I’ve got a lot more to report on this; but for now, I’ve got a roundup of industry news, followed by links to a podcast of a bike manufacturing discussion and an article on bike manufacturing published today by Neighborhood Notes.

Circulus to take center stage at Interbike
Interbike is the largest bike industry show in America. Held in Las Vegas, it’s the place where the entire bike world converges to hammer out deals and see the latest products and trends. At the center of attention this year will be the Circulus mini-velodrome. Circulus is a 45-degree banked, circular wooden track that was purchased by North Portland based Portland Design Works earlier this year.

At Interbike, Circulus will be setup next to the Urban Lounge, near the fashion show and beer garden where attendees can give it a try.

A spokesman for Interbike says, “We’re placing a big emphasis on urban cycling and the brands that support it and having Circulus there will be a big draw for that segment of the market.”

Having Circulus at Interbike is nothing short of a marketing coup for Portland Design Works. The track — originally created as an senior thesis project by an art student in California — cost them only $3,500. “Best $3,500 we ever spent,” PDW’s co-founder Dan Powell told me the other night. Indeed.

Cyclone gets nod from Shimano

“The relationship creates improved distribution in a key regional market for Shimano and addresses the specialized needs of customers in and around the Portland area, which has become one of the most progressive bicycle markets in the country.

Cyclone will distribute Shimano components to over 2,300 dealers in the region. For local accounts, Cyclone delivers orders by cargo bike.

A retail store for Rapha in San Francisco 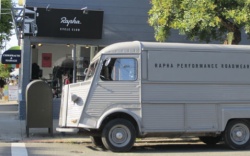 Rapha, a London-based bike apparel and accessory company with its North American headquarters in Portland, recently opened a ‘Cycle Club’ retail store in San Francisco. The company says the store has quickly become a “flagship destination” and instead of closing it on August 1st, they’ve decided to make it their first-ever permanent retail location.

Rapha GM Slate Olson (who works from an office on N. Mississippi St) told UK industry mag BikeBiz that, “We are excited to have the chance to become an active part of a culture and community that shares our same passions for quality-riding, food, coffee, fashion and design.”

Local radio show features panel discussion on potential of Portland bike manufacturing
Lauchpad Radio, a show hosted by local small business owner and economic development expert Tony Fuentes, recently featured a two-part discussion titled, “Bike Manufacturing, Can it Happen in Portland?” I joined Tony and guests Bill Stites of Stites Design and Chris Harbert-Erceg of Crank for a lively chat about many of the issues surrounding this exciting topic. Listen to part one and part two and stay tuned for more coverage.

While we’re on that topic, check out the article just published by Neighborhood Notes, The Challenge of Bicycle Manufacture in Portland.

The bike-related economy in Portland is alive and well!

I wonder where they found that lovely Citroen panel van?

Rapha is killing that Cat 3 Masters market. Everyone else knows that the only reason to get it, is to sell on eBay to a Cat 3 Masters rider. I think they should crank the price up a bit more and lower the quality. Then it might get worn by Paris Hilton or maybe even that dude she dated who paid the homeless guy $100 to pour a soda on his head.