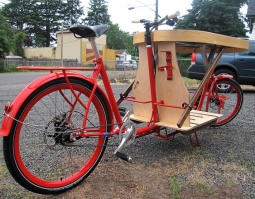 When local cargo bike manufacturer Metrofiets unveiled their “Hopworksfiets” back in September 2009, it was a sensation. The bike, custom made for Hopworks Urban Brewery to be a beer bar on wheels, was a media darling and even made it onto the Discovery Channel.

The bike itself was a smash hit, but it also saw huge demand as event organizers throughout Portland realized its popularity and beer-dispensing qualities.

Now the owners of Metrofiets have made version 2.0 and they’re getting into the beer bike rental business themselves. 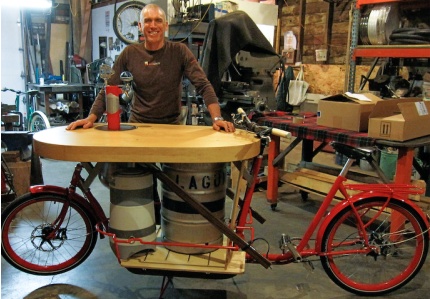 “At last count there were over 35 breweries and one beer bike. Well, now there are two. Our first beer bike proved such a success that we built another, more compact, keg hauling, beat thumping party machine – for your rental pleasure.”

The beer bike costs $99 for three hours between noon and 10:00pm or $275 for the day. Sponsors on the project were FH Steinbart (home brewing supply store), Shimano, EcoSpeed, Stereotypes Audio, and Sugar Wheel Works.

Metrofiets is throwing a launch event for the beer bike from 5-8:00 pm at the Cascade Barrel House as part of the Cargo Bike Roll Call Pedalpalooza event.

More photos and information at Metrofiets.com/rentals.

OK, who’s going to be the first person to rent this beast and bike it all the way up to council crest?

wow, while that is an awesome contraption, that rental price is out of control! my trailer with-2-kegs-or-1-keg-and-mobile-sound-system capacity can be borrowed for far cheaper. of course, you’ll need serious legs to move it since it has no electric assist (or fancy bar-top, though one could be easily improvised if you really need more weight =))

I dunno, it sounds like a great deal if it also includes the price of the beer…

2 bucks a pint (donation, of course) leaves room for a pair of $100 kegs after the rental’s paid…just need 120 thirsty people, or 60 Timbers fans who just got paid.

There ares some serious spelling errors on that website. Looks like someone used too much auto complete to write that copy. With that said, fantastic idea. Love the ride. Question though- what’s the point of having a beer bike if it gets dropped off and picked up?

Just as there are some spelling errors in my post. Who the heck am I to judge?

I’m up for the Council Crest challenge! Nice work guys… oh and we need to talk about cafe bike v2.0

That’s hilarious and brilliant at the same time!

How does the renter ride it with full kegs? Or is it just a conversation piece?

your legs should work just fine. you simply squeeze the muscles and apply pressure to the pedals and the cranks and chain drive the bicycle forward. 😉

Here’s what we need in Portland. My daughter is living in Frankfurt, Germany and this is how they do it over there: http://www.bierbike-frankfurt.de/fileadmin/frankfurt/Dateien/flyer_eng_frankfurt.pdf