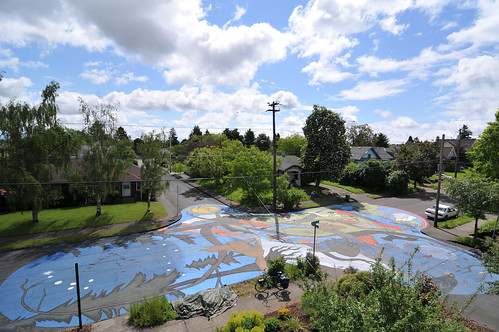 The largest street painting in Portland, as seen from a roof on the northwest corner of the intersection.
(Photos © J. Maus)

“The whole point was to draw people together, and already, there are people coming out here everyday, they stand around and start talking.”
— Eric Griffith, who lives on the corner

This past weekend, neighbors around NE Holman and 8th came together for an ambitious project that has brought the community together and improved traffic safety — and all it took was volunteers and less than $2,000 in donations.

What was once just a forgettable crossing of two residential streets is now home to a vibrant, expressive, massive street painting that is impossible to miss. There are several street paintings scattered throughout Portland, but this is the largest. 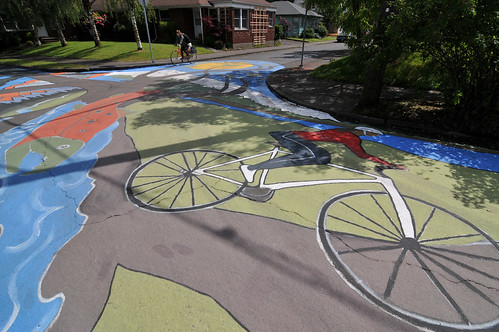 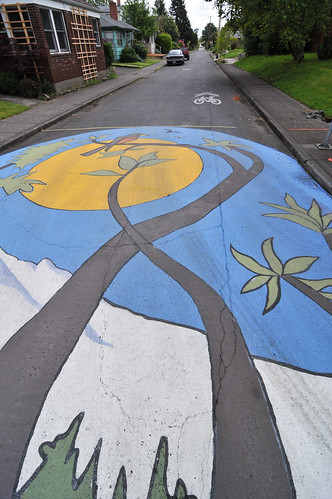 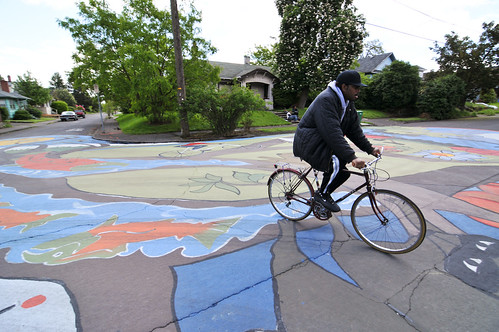 44-year old Eric Griffith lives on the corner. He told us this morning that the painting has had an immediate impact on his neighborhood.

“The whole point was to draw people together, and already, there are people coming out here everyday, they stand around and start talking — that didn’t happen before nearly as much. It’s also bringing people out into the street, so that’s been an interesting phenomenon.” 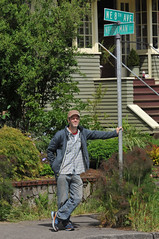 Eric Griffith outside his home on
the corner of 8th and Holman.

Another phenomenon has been slower traffic speeds. NE 8th has no stop sign at that intersection, and cars are known to travel at unsafe speeds. While I stood on Griffith’s roof (to take photos), I watched cars slow down considerably as they approached the intersection. This more cautious driving behavior might be due to the novelty of the paint, but if the painting continues to draw people onto the street, their presence could give it a lasting safety benefit (fellow neighbors in the street tend to be great traffic calming tools).

The design itself, created by local artist Zac Reisner, is a four seasons theme. Each leg of the street represents a different season and it’s all tied together by tree roots and a stream in the middle. The animals in the painting — a coyote, raven, raccoon — are all regular inhabitants of the street.

Other regular inhabitants of NE Holman are people on bikes. The street has recently been given the bike boulevard treatment by the Portland Bureau of Transportation. With its speed bumps, sharrows, and lack of stop signs, it has become a popular artery for east-west bike traffic. (PBOT is also working with neighbors on a “pocket park” that will span across Holman just a few blocks east at NE 13th).

Griffith says he and other neighbors want Holman to be “the best bike boulevard in the city.”

“Once we heard about the bike boulevard, we were really excited to be able to augment what’s already there… We want to do things — at least in this section of the street — that help build the bike culture even more. We’ve been here so long and wanting that, that seeing it finally happen is magic.”

While Griffith, who has one of the BTA’s “Build It” signs in his window, is excited about the bike traffic on Holman, he also understands that, “There’s so much more to it than just bikes.”

“I’ve lived in the Woodlawn area for 15 years,” he told me today, “and I’ve met just as many people through all that time that I’ve met in the past two months through this project.”

Over 100 people showed up over the weekend to help with the painting, the largest turnout ever (according to City Repair, the non-profit organization that makes these projects possible).

— This project was done as part of City Repair’s Village Building Convergence which started last weekend and continues through Sunday.

— Along with Griffith and artist Zac Reisner, major work to envision and complete this project was done by Anne Tracy and Annie Vail.

— To get approval for a project like this, the City of Portland requires 80% approval from all residents within a two block radius of the intersection.

— The cost for the permit (about $1,000) and for the paint was raised through neighborhood donations.

— Watch a time-lapse video of the creation of this mural below and learn more about the project on its Facebook page.

Because of our crooked historic streets, people get lost, and as a result avoid driving through our streets. This has got to be one of the quietest neighborhoods in any city- and the residents are bike crazy!

It’s getting repainted tomorrow. I enjoy riding through it several times a week.

Wow!!! That video was great too.

Gotta watch out: something like this could spread like kudzu and soon cover an entire residential neighborhood.

I pass this intersection sometimes. yes it is fading… there is another one in Belmont area.

I just rode over this on my way to the airport yesterday, and it is beautiful and inspiring!!

That’s really cool. I always liked the one over by Belmont.

That video is better than most Hollywood movies.

Very cool. I always love coming upon these as I’m riding or walking around. Every neighborhood should have at least one. Nice job to everyone involved!

does that bicycle have balls?

I sure hope they used bio-degradable paint.

No kidding, why wouldn’t this be mentioned?

Good job. Now I want rent a plane or balloon to really see it. 😉

dude, that is awesome! Talk about taking charge and beautifying your neighborhood. We need more of these!

That is just freaking awesome, love it. I wonder how they brought up to scale the original design without loosing proportions.

Griffith said it was pretty simple.. They just laid out a grid and filled in the boxes.

Anne Tracy & Eric & Jay figured that one out. the set up a grid system and transferred it onto the street. No small job and a lot of trial and error along the way

That is so great. I used to live off of Holman, and have since moved from Portland, and this really makes me want to go back!

It was fairly straightfoward to paint, once the outline was down. As I said several times that day, it was as much about building a neighborhood as painting a street. Woodlawn neighbor (and crazy good bike mechanic) Owen did a great job on the video!

Anyone know when they’re going to finish the speed bumps on Holman?

I’m shocked the City allows this. I think it’s great – I’m just surprised a city (even one as open-minded as Portland, and even with a permit) allows it.

The design near Belmont is fantastic – too bad it is faded. I wonder if such paintings can be rehabilitated, or sanded away and repainted.

actually both the Sunny side intersection and the Sellwood intersection is going to repaint it next weekend as they do every year. All of these are done through the Village Building Convergence via the nonprofit City Repair Project. And are repainted every year by the community-a great way to maintain community bonds. And yes at first the city did not allow it but the Sellwood project (Share-it Square) went ahead and did it anyway. After the huge public support, the city changed their tune and now they very much support what we do. though we did have to get a permit and I knocked on a lot of doors to get a lot of signatures. But it allowed me to meet nearly everyone in the neighborhood in the process, which was my favorite part of the process.

That one on Yamhill has been redone at least once… maybe it’s due for another touch-up.

Oops! I didn’t see the above comment when I posted this. Glad to see they’re both being refreshed!

Is there any research regarding the traffic-calming effectiveness of street painting? This is 2 blocks from my home, I’ll have to take the kids to go and see it soon.

What kind of paint did they use? The artwork is beautiful, as is seeing all those people come together to work on it. So incredibly awesome, thank you for sharing this!

This was SO AMAZING to ride through the other day. I loved every second of it.

I am really eager to get my local intersection painted, and FAST, after seeing this. Especially since it is on Holman St, just a bit to the east. Let’s paint MORE of Holman St!

ANYONE INTERESTED IN PAINTING NE HOLMAN AND 32ND PL??? Let me know.

I would so love to do a Piaza like art project on SE Harold Street. Folks drive fast E. and W. on this street, the speed bumps are way too far apart and the posted limit is a high 30 mph for a neighborhood street. It is a fantastic connector to Mt Scott community center traveling E. to with Cafe and the Woodstock area. How can we look into doing something like this on Harold St? Near the intersection of where 52nd a Harold meets to 53rd would be a major help and create the feel this street woudl appreciate.

“The animals in the painting — a coyote, raven, raccoon — are all regular inhabitants of the street.”

Coyotes are regular inhabitants of NE 8th and Holman? That’s news to me.

Coyotes are spotted in NE (especially the ‘outer’ regions) relatively often. Not as often as you see them out in Troutdale, for instance, but they’re definitely around.

Chester, or anyone else on BP, any idea what the traffic counts/Max required might be?

All the requirements are on City Repairs website: http://cityrepair.org/how-to/placemaking/intersectionrepair/ at the bottom, as a word document.

Rule #3: The two streets must be classified as Local Service Streets and carry less than a combined 2,500 vehicles on an average day.

This looks awesome! Is there a way to get in touch with Eric or someone else who can help with painting the new Bull Run Loop for downtown Portland?

I was born and raised in that house!!!! The neighboorhood has changed so much.

Why didn’t they just paint “STOP”?