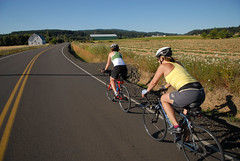 On the road to economic development.
(Photo © J. Maus)

The Washington County Visitors Association has awarded a $20,000 grant to the organization that puts on the Harvest Century bike ride.

Rebecca Miller, the Development Director for Community Vision, Inc. the organization that puts on the ride, says they’ll use the money to try and lure 300 out-of-town visitors to Washington County. Those visitors come for the ride and end up spending money on lodging, food, and other products and services. Community Vision will use the grant money to pay for marketing of the ride and hire staff to handle PR.

Bicycle-related tourism is a well-established part of Oregon’s economy. Many tourism agencies have realized that the rural roads throughout our state, the growing popularity of bicycling in general and the bike-friendliness of Oregon’s major cities are the perfect recipe for economic development through bicycling.

The Washington County Visitors Association is just the latest tourism agency that has come to this realization.

Travel Oregon has devoted major resources to promote bicycling, Clackamas County (as their ads on BikePortland attest) has an entire campaign to promote bicycling. At a recent meeting of the Oregon Bicycle Tourism Partnership in Salem, communities from Grants Pass in southern Oregon to St. Helens in Columbia County spoke about their successes and new initiatives to jump on the bike-tourism-economic development bandwagon.

Even U.S. Senator Jeff Merkley has gone to bat for bike tourism.

From the emergence of the former timber town of Oakridge as one of the premier mountain bike destinations in the country to the economic boost Cycle Oregon gives to small towns throughout the state — bicycle tourism is a very bright spot in Oregon’s economy.

— The Harvest Century, now in its ninth year, takes participants through the wineries and rolling hills of Yamhill Washington County with a base in Hillsboro and stops in Newberg, Gaston, Forest Grove and Canby. The Harvest Century is a fundraiser for Community Vision, a non-profit that provides support and housing services for people with disabilities.

That’s great news! It has been a tough year for NW organizers to acquire funds. Hopefully communities are realizing the positive economic impacts organized rides and races have on their areas.

Rebecca and the whole Community Vision crew work so hard on this event ride, they deserve the support. It’s a great ride, I’ve always had fun, as long as they don’t run out of beer after the ride!! I’m in again this year, looking forward to it.

Clarification: The Washington County Visitors Association offers grant support for this ride because the majority of the course is in Washington–not Yamhill–County. Ride registration is open now!

Thanks Angie. My apologies. I’ve edited the story. — Jonathan Maus