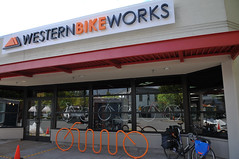 Even in a down economy, Portland’s bike business boom shows no signs of letting up, especially when it comes to bike shops. Throughout the city — from Northwest to East Portland — shops large and small are expanding or opening their doors for the first time.

On the corner of NW Lovejoy and 17th, Western Bike Works plans to open their gleaming new, 10,000 square foot shop this weekend (ironically, the former tenant was a car dealership). I stopped by yesterday for a chat with co-owner and GM Jay Torborg. 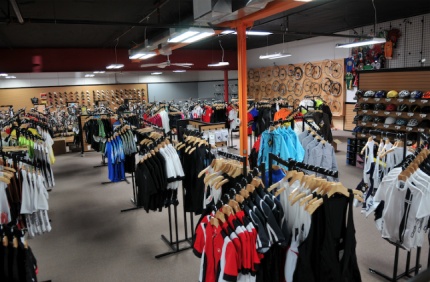 Western Bike Works has been around as an online retailer since 2003. The company s owned by Velotech, the same company that operates BikeTiresDirect.com, which has been around since 2000. Velotech maintains a large warehouse with a small retail shop for Bike Tires Direct attached to it near the Portland Airport, but it’s mostly a place where locals can pick up orders. 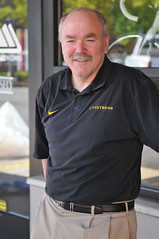 Torborg says they’ve been considering a new store location for years now. “We wanted to have more of a downtown presence that was easier to get to and has more foot traffic.” He adds that Western Bike Works has been “remarkably successful,” and pulls in about $4 million in sales each year. “About a year ago,” says Torborg, “we thought, now’s the right time.”

Another local shop with a large online business, Universal Cycles, has moved into a new and expanded location. Universal was formerly based in Northwest Portland but they’re now at NE 22nd and Burnside — directly adjacent to the popular bike street of SE Ankeny. 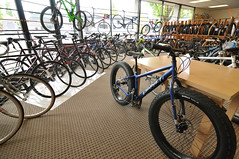 Universal’s location boasts windows
on both Burnside and Ankeny.

Universal’s new retail location is attached to a large warehouse; one of four the company has throughout the U.S. (others are in Minnesota, New Mexico, and Utah). In addition to a huge selection on the showroom floor, customers can also search Universal’s entire inventory via in-shop computer and then send a print-out of their order to employees. If the products are in stock in Portland, they can be picked up immediately.

Universal is open for business and there’s a grand opening planned for June.

Further east on Burnside, at 57th, a new shop called Cyclopedia has just opened their doors. I haven’t met the owners yet, but the website says,

“We’re a small neighborhood repair shop that likes to keep it simple and local. We offer affordable rates on repairs and accessories for your daily commuter or your sunny-day cruiser. We specialize in vintage restoration and single-speed conversions but, of course, we also do general tune-ups and repairs.” 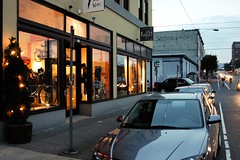 And finally today, one of Portland’s most famous bike shops, Clever Cycles, has just announced yet another expansion. The shop — which almost single-handedly spurred the Dutch and cargo bike craze in North America — will buy the corner space next door to their existing store at SE 9th and Hawthorne.

Writing on their blog, Clever owners say the expansion will mean 2,200 more square feet and four times as many windows to dress up with beautiful bikes and accessories.

A bit further south of Hawthorne, iconic and beloved shop, Sellwood Cycle Repair is slated for a move from their current location on SE Milwaukie Ave to a larger space on SE 13th (7953 SE 13th). Shop co-owner Erik Tonkin says given that the shop turns 20 this year, “It feels like an appropriate time” for a big change.

Sellwood’s new location will have over five times the square footage. They’re already Kona’s largest U.S. dealer and the increased size, Tonkin says, will allow them to stock even more popular models (they also stock bikes from Yuba and Scott). Customers will also notice an expanded repair and service area.

Here’s more from Tonkin, whom we contacted via email today,

“I see this move as a major investment in bikes, in our neighborhood, our customers, and, of course, our business and ourselves. We’ve put a year’s worth of work into the building, and it really shows.”

Sellwood will be settled into the new location by early June.

With all this bike shop news, one thing is clear: Bikes are a good — and growing — business in Portland.

— Jonathan Maus: (503) 706-8804, @BikePortland on Twitter and jonathan@bikeportland.org
Get this post delivered directly to your inbox.
BikePortland needs your support.

Sellwood Cycle Repair is also about ready to move to a new location on SE 13th. Much more space for those guys. FYI.

Thanks for the heads up about Sellwood. I added a line about it at the end of the story and will update with more details when I hear back from co-owner Erik Tonkin.

So why does PDC still view bikes as “recreation and outdoor” and not transportation or good for the economy other than as an object to buy?

not to be a downer, but the same thing happened in the 70’s with a ton of shops opening. Now there’s only 2 of those shops left Bike Gallery and one in N PDX whose name escapes me at the moment.

You may be referring to Weir’s, which I think has been around since the earth cooled.

middle of the road guy
Reply to  Jacob

same thing happened with custom frame builders in the 90’s.

Past performance is not indicative of future results.

Well, I’m not sure how many shoe stores or furniture stores from the 70s are still open either…

And great news about Sellwood! I love those guys and wish them every success (and it’s about time they got a bigger space; bikes are stacked three and four deep there).

I guess I’ll have a couple new shops to visit next time I’m in town…congrats to all on their success.

there is none in Milwaukie yet… I am glad Sellwood has a few that I could stop by on the way home from work.

Interesting that Western Bike Works will have a coffee shop… when I’m out for a solo ride on my road bike I can’t ever stop and grab a shot or two of espresso because I don’t have a lock with me (tough life, I know!).

Since they’re a bike shop, I wonder if they would be amicable to folks bringing their bikes inside while ordering?

There will be bike parking in the store. So come on in and have an espresso.

Great not only that Sellwood Cycle is expanding, but that they’re a) rehabbing an existing building and b) strengthening the retail heart of the neighborhood.

I am campaigning for Universal Cycles to allow entry to their store from the doors on Burnside. I think this leads to better urban environment and more walk-in business. I guess its a pet peeve of mine because I have so far refused to go in the store even though I live fairly close and go by frequently. Maybe by the grand opening they will make this happen.

Wait Issac,
You refuse to go into the store because of where the entry doors are?

Perhaps you should explain further, because you do sound insane (and I’m being charitable here).

When I was in school I worked at a store in Pioneer Place, right by the doors to Morrison on 4th. We had people grab stuff and run all the time, it was quite annoying.

Universal Cycles shop location is pretty smart. Being between Burnside and Ankeny they get drive-by visibility from Burnside and bike-by access from Ankeny.

I had the same reaction as Isaac until I biked there yesterday. It’s right on a major bike thorough fair. I look at it as if the shop is giving something to cyclists with the entrance on the Ankeny side, especially since entry from two sides isn’t practical for them at this point.

I’m sure they’re leaping into action at this very moment.

Bike Tires Direct – owned by the same parent company – has a rack inside the front door to the retail space at their warehouse. Didn’t notice a coffee bar this afternoon, though…

Yeah, I work out near the airport so I’ve been to the warehouse many times. I’m looking forward to checking out their new store in the Pearl, even though I already have my favorite shop in the area. Doesn’t hurt to have options!

I peeked in the windows this afternoon at Western. Holy S**t! The place is huge, open, merchandised very well, and looks fantastic! Plus, many drool worthy steeds were visible. I can’t wait to get inside.

What is the story with this company? They have parent names under Velotech, Bike Tires Direct and if Im correct, Ive also heard CampMor. Ive also heard they were trying to start up a wholesale distributor to sell to bike shops

Jacob
not to be a downer, but the same thing happened in the 70’s with a ton of shops opening. Now there’s only 2 of those shops left Bike Gallery and one in N PDX whose name escapes me at the moment.

Gasoline wasn’t $4.00/gal., there was no bike infrastructure to speak of, people weren’t aware of climate change, people wanted to live in suburbs instead of the city, we didn’t have a health epidemic stemming from a too-sedentary lifestyle…etc.

I could go on, but the point is that much has changed since the ’70s. And bicycling’s growth in Portland has been occurring for the past 10 years or more. It isn’t exactly a “flash in the pan”.

@Mike: Velotech, the parent company who owns the two stores/websites Bike Tires Direct and Western Bikeworks, does not own CampMor. They are not starting a wholesale distributor to other bike shops either.