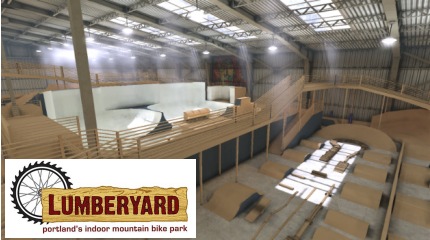 Concept drawing of The Lumberyard. See more images below.

Imagine a place about the size of a Costco warehouse where people of all ages (kids too!) and skill levels can ride indoors, hang out, surf the web, and meet up with friends. That’s the vision behind The Lumberyard, a new private business venture modeled after the successful Ray’s Indoor MTB Park in Cleveland, Ohio.

The Lumberyard will be about 60,000 square feet of jumps, berms, ramps, pump tracks and all sorts of ways to have fun on your bike — whether you need a place for your kid to learn to ride, or if you prefer a BMX bike, a 26-inch mountain bike, or anything in between. 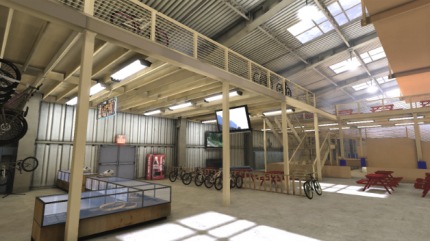 A place to ride and hang out. 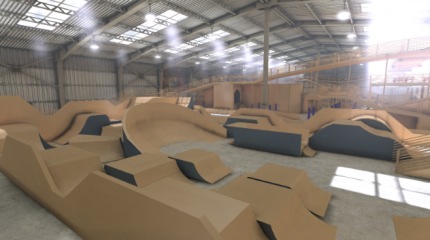 The facility will have different sections for different riding styles and skill levels. 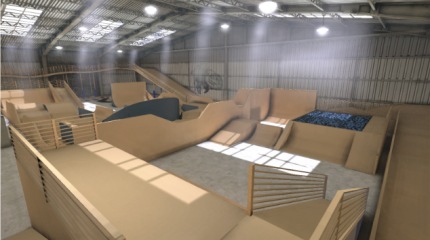 The visionary behind the project is Will Heiberg, currently Vice President of the Northwest Trail Alliance and Art Manager at Liquid Development, a Portland-based video game company. Heiberg has been looking for a way to enjoy recreational mountain biking with his kids for years and has been a fan of Ray’s MTB Park in Cleveland since it opened in 2004. Ray’s opened about six years ago and has been a huge success; so much so that Trek Bicycle Corporation bought it in June 2010 and the concept is now expanding to other cities. 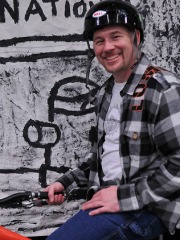 On The Lumberyard, Heiberg has partnered up with fellow NW Trail Alliance Board Members Michael Whitesel and Matthew Mangus. Whitesel is the company’s finance and business manager and Mangus’ marketing firm, Mangai Rollin, has been hired to handle branding and media relations.

At this point, Heiberg says his team has secured “substantial investors and some solid partners.” The last remaining hurdle is finding just the right location and building for the park to call home. Heiberg is remaining close-lipped about the potential location, but says they are working with the City of Portland to make sure it is in the Portland metro area.

The Lumberyard team is also staying mum on a possible opening date. Asked whether or not this was the real deal, or just another great idea that might never see the light of day, Heiberg assured me that The Lumberyard is definitely going to happen. “We were just keeping things quiet,” he said, “until we felt like we were really close to pulling it off.”

Word about the project leaked out on Thursday at a movie screening benefit for the NW Trail Alliance. The Lumberyard was also featured in a presentation at the Trail Alliance’s ‘Trail Fest’ event that took place on Friday night. Another sign that Heiberg and crew are serious is that they sent Mangus to the Sea Otter Classic bike race/festival in Monterey, California last weekend. He was there to share a promotional video and drum up sponsorship interest.

If successful, The Lumberyard will be much more than just a place to ride. “We’re looking to make sure this is not only a fun riding spot, but that it’s a social hub,” says Heiberg.

When I lived in Cleveland I used to go to Ray’s all the time. Ahhh this is going to be awesome! Guess I am going to have to get another dj bike.

this looks so SWEET!

can i ride my bmx there?

absolutely cupcake. Heiberg says everything from tiny kids on balance bikes to bmx and up to regular mtbs. Bring it and ride it!

lol the lumberyard is the biggest strip club in Iowa

Very excited to watch this progress. Best of luck to you, Will and Michael, there are a ton of folks cheering for your eventual success!

OMG…I’ve been to Rays in 2005 and have been dreaming of a location in PDX.

It’s going to be KILLER.

If they serve coffee and beer too, I may never leave!

Big fan of this idea, and been hoping for something like this for years. Guess I won’t be moving to Boulder after all 😉

Wow, fantastic work Will & Matthew! This will make Portland winters so much more manageable.

Awesome to see this happening. The City needs to get behind this in a big way.

Also worth noting: The pretty images you see here are shots taken from within a real-time 3D game engine (the Unreal engine, used in games like Gears of War and Mass Effect), so you can actually get in there and fly around the space virtually. Ask Will for a demo. 🙂

And Will is the designer of the skills area you always see swarming with kids at Sunday Parkways: http://bikeportland.org/photos/photo/4614307734/sunday-parkways-ne-16.html. Try those ramps and balance beams next Sunday Parkways for a nibble of the fun you could have at something like The Lumberyard.

This is awesome news. My only concern is the size … 60,000-sf is smaller than it sounds. The original Ray’s is more than 135,000-sf with five different rooms. The new facility in MWK is 110,000-sf and barely big enough for everything in it. Though they both have foam pit facilities etc. Lumberyard may not want. Stoked either way.

Agreed. A typical 200×200 Portland city block is 40,000 square feet. If this is going to be in Portland Metro, it will need to be in a place with larger than standard blocks.

This is just what Portland could use. I just built an Instigator that would be quite happy in a place like this…..

Dang! I remember talking to Johnathan Allen about this a few years ago and wondering WHY with all the interest in MTBing (and lack of easy trail access) Portland didn’t have a “Ray’s”. I might have to move back to Portland for THIS.

no dirt or mud?

Oh, sweetness!!! This just made my day.

I go to Ray’s every year when I visit my parents about the only thing that gets me excited to go to Cleveland). The key to Ray’s is they didn’t just make it a park full of jumps (which is kind of what this looks like in the pictures). They put all kinds of good obstacle line in (teeters, logs or all shapes and angles, lots of balance obstacles, rocks). And the key is flow-through. You could ride in circles for hours, hooking up different lines with different parts of the park.
They need to make sure this isn’t just a glorified skate park (which I think Ray’s is inching closer towards).

I agree that the size will have to be bigger. Boulder tried to do something similar inside it’s tiny indoor velodrome and it just was kind of sad.

Not having dirt actually makes it better, as there is no issue with things getting muddy or dirt from the inevitable leaks you will experience in an old warehouse.

Awesome. There was a building for sale at the east end of the Morrison Bridge for several years; I kept hoping someone would snatch it up and do something like this…unfortunately, Portland U-store or whatever they’re called eventually moved in.

Very stoked to see this operation get up and running!

Everyone could contribute a great deal by working with Mike et al in influencing the city to soften their positions regarding recreational use within a building – this has proven a huge barrier.

Would love to see it include an indoor BMX race track.

I like it. I hope they have lots of good spectator viewing areas.

Now I have a reason NOT to sell my DJ bike…!

Awesome! I hope it works out. When is the opening date?

It isn’t single track, but it will be fun.

This will be such gift to those of us whose workday is too long to get out to the trails at the end of the day during the week. Hope the evening hours are extended…
Will, you are awesome – can’t wait for this vision to come to fruition!

This place is gonna be cool…