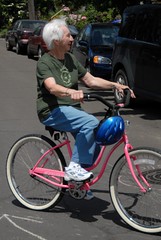 The other day, a friend of mine who works at PBOT emailed me a link to a video I made way back in June 2008. It was from Portland’s first-ever Sunday Parkways.

That first event will always hold a special place in my heart. Not only did it happen right in my North Portland neighborhood, but there was such a sense of pride and excitement that our City could pull it off.

With the hugely successful CicLAvia in Los Angeles and Sunday Streets in San Francisco last weekend, and with Portland’s first event of 2011 coming in less than seven weeks, it seemed like a good time to share the video again.

I can’t wait for May (and June, July, August, and September)!

Great video, but bluesy rock is all wrong for biking. Here’s what I’d use for Sunday Parkway background music:
http://tinyurl.com/3oq9l2t
-John