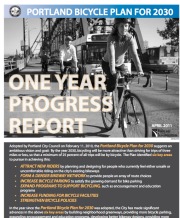 It’s been over a year since the City of Portland unanimously adopted its Bike Plan for 2030. The plan was impressive for its depth and scope; calling for a city where, by 2030, bicycling is more attractive the driving for short trips and where 25% of all trips are made by bike.

So, just how well has PBOT done in implementing the plan so far?

In a letter to Council about the progress report, Keil wrote:

“In the year since the plan was adopted the city has made significant advances in the above six areas by building neighborhood greenways, providing more bicycle parking, expanding our encouragement and education programs, developing better bikeway designs, providing more funding and designing and implementing projects with an eye toward the approved policy objectives.” 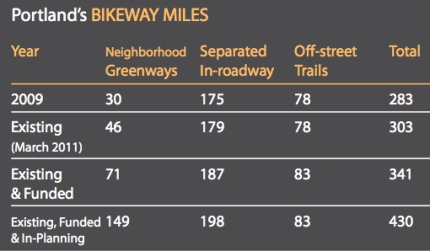 Chart from page 3 of the report

In addition to the report, PBOT has also published an appendix that lists the status of 106 action items in the Plan. Here are a few examples:

Action 3.5: Further the development and enhancement of existing and proposed natural surface trail facilities, such as the proposed Gateway Green project

Status: Gateway Green is actively seeking funding. Portland Parks is working to improve riding in Forest Park and Powell Butte and is working with the NW Trail Alliance on a Bike Skills Area pilot project.

Status: Five seems to be the number of Sunday Parkways existing staff can manage. Most funding is donated as city does not yet dedicate sufficient resources for effort to be entirely publicly-funded.

The Bicycle Transportation Alliance released their own year one Bike Plan review last month. With the Plan’s appearance at City Hall tomorrow, the BTA wants to say “Thank You” for the progress thus far. They’re urging members to print out Thank You signs (below) and hold them up when the agenda item comes up (10:30 am).

You can get a sneak peek at the progress report here (PDF). Also download the appendix, Report on Immediate Actions here.