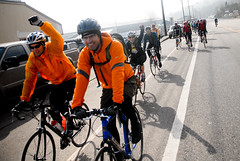 The infamous and grueling “De Ronde Van West Portlandia” is set for this Sunday (4/17).

The ride, inspired by the Tour of Flanders in Belgium, was first held in 2007. 100 people showed up that first year and by 2009, the turnout had ballooned to 600-700 and the ride caught the attention of Oregon Public Broadcasting.

The route of De Ronde is legendary. About 50 miles in length with thousands of feet of climbing, it tackles several of Portland’s steepest hills, including some with inclines as steep as 26%. Organizer Brad Ross says he’s made some changes to the course this year, including, “one really cool climb that I don’t think many people know about.” Ross also decided to take a descent on Upper Hall off the route because he felt it was too “boring and dangerous.”

This year’s ride takes off Sunday at 10:00 am from the corner NW Industrial and 31st (map).

See our photos and past coverage of De Ronde in the archives. For more on the ride, visit RondePDX.com.

Weather permitting, I’d like to be there. (Good weather, and I’m working. Bad, and I can ride)

I got a little preview yesterday up around Council Crest and Skyline – lots of fresh little lions. Wouldn’t miss it.

For those farther south in the Willamette Valley not wanting to brave the crowds, we cooked up a Salem version that was about 5,000′ of climbing in about 45mi. We are tweaking the route from this original one to try and keep it to about 3hrs of riding (the pre-ride we did was a bit over 4hrs):

We’ll be taking off from West Salem on April 17th at 10am.

I’m not feeling quite insane enough this year.

Tempted by the pain…

I had planned on doing the ride this Sunday, but instead decided to meet some friends in Palm Springs for Coachella.

Holy God, was it hard. I ended up doing it in two segments. I met a friend to ride part of it with me at Pittock Mansion, but unfortunately he crashed on the descent down from there. My wife came and picked us up and took him to the hospital. He’s okay, no broken bones, but pretty banged up. It was such a nice afternoon that I decided to head back out and finish the ride, so I road back up to the site of the crash via Burnside and picked the route up there. Long story short I finally got to the top of Council Crest about 7 o’clock and could barely hold onto the handlebars. My time on the actual route was 4:40. The last 10 miles are absolute torture! Good luck to those planning on riding it Sunday. It looks like the weather might be okay.

Should try to schedule a non-timbers home game day next year.