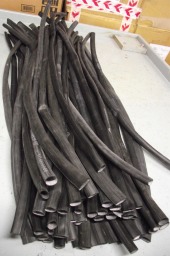 Since their launch less than two years ago, Portland-based Cycle Dog has grown by leaps and bounds. The company — which makes dog collars, belts (for humans) and other products out of used bicycle inner tubes — boasts dealers nationwide and they took home “Best in Show” honors at the 2011 Global Pet Expo trade show.

“We have a dream of making Portland the first city to fully close the loop and reclaim every tube that ever hits the road.”
— Lanette Fidrych, owner of Cycle Dog

Cycle Dog currently picks up loads of used tubes at large local bike shops, where service departments go through hundreds of tubes a week (since 2009, Cycle Dog has re-used over 10,000 pounds of inner tubes); but what about folks like you and me who have a pile of old tubes sitting in the garage?

“It is very difficult to find places that will recycle old tubes.” Fidrych says, “We wanted to make it easy for individuals to drop off their tubes and know that they will be reclaimed and made into something useful again.”

Here is the list of Portland-area Tube Drop locations:

Cycle Dog accepts all road tubes (700c, 27 and 28-inch), with the exception of puncture resistant, super-thin race or tubes treated with sealants. If you work at a shop that’s not on the list, contact Cycle Dog to participate in the Tube Drop program.

For Fidrych, the tubes mean much more than products for her company, it’s about squeezing every drop of use out of them. “We have a dream of making Portland the first city to fully close the loop and reclaim every tube that ever hits the road.”

awesome.
My dogs have Cycle Dog leashes. They are strong, functional, attractive, and will probably last forever. They get lots of compliments too – I’m always telling people to google Cycle Dog.

bonus: they are also chew-proof. Apparently dogs don’t like the taste. 🙂

Great ideas. On a side note, my company, Edible Cycles, is reusing empty pill bottle for the production of a few pedal powered devices. We have drop off locations at Clever Cycles, Crank, and Free Geek.

Road tubes only? Too bad. I’ve got a couple of MTB tubes in the pile that would love to be recycled.

^^ Sorry, don’t mean to sound negative. This is still awesome!

I’ve never understand why patching tubes has fallen out of favor. Unless you have a major tear, a patch followed by some vulcanization is bomb proof.

do they not accept previously patched tubes?

Just to clarify, Cycle Dog does accept tubes that have been patched. We are also working on methods to utilize mtb tubes in the future!