Advocates are hailing the Oregon Department of Transportation’s (ODOT) plans for a new crossing treatment on SW Barbur Blvd. The plans were unveiled at a meeting held in Southwest Portland last night.

As we detailed yesterday, the crossing in question is in front of the Rasmussen Village Apartments, about 3/4 of a mile south of the intersection of Barbur and SW Hamilton. Kiel Johnson, a citizen advocate who co-founded the Friends of Barbur activism group, was at the presentation last night and he’s “ecstatic” about what he heard. 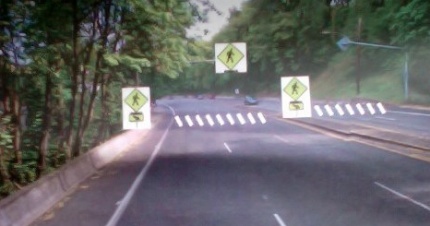 Mock-up of plans for the new crossing

Here’s how Johnson describes ODOT’s plans for the crossing:

“There are going to be three rapid flash beacons on either side of the crossing. When you press the walk button these lights, located under pedestrian signs, will flash telling cars to wait at the new stop bar. The lights will flash until you are able to walk across the entire street. In addition to the three flashing signs on either side there will also be a warning sign on the approach to the crossing on both sides.”

Johnson also shared that the meeting last night was packed with neighborhood activists and, “The reception in the room to the project was 100% positive and excited.”

Barbur is a high-speed, six-lane arterial in this location and advocates have been pressing ODOT for years to do something about the crossing. Back in December a woman was killed while attempting to cross Barbur just north of where this new crossing will be installed.

Johnson says the “truly innovative approach” shows that ODOT is committed to safety for all users of SW Barbur. “It is not often that ODOT is willing to install a “first of it’s kind” signal crossing… I think everyone should be celebrating this project.”

ODOT hopes to install the new crossing treatment by the end of this summer. We’ll have more details as they become available.

I’m not celebrating. This is completely inadequate and only gives a false sense of security. Speeds and design of the street have not changed. It’s still an incomplete for cars only place.

I agree that the road needs to be redesigned to encourage lower-speed driving. Until that happens, I prefer to think of this installation as a powerful tool to assist pedestrians. It’s designed to leave responsibility in the hands of all users. Same rules as always, just some real bright communication aids. And I think that’s a good idea.

Can I get this at SW Hall, for the Fanno Creek Trail Crossing? PLEASE!!!!

If ODOT is willing to do this on Barbur, a much higher-speed road, why can’t they do it on Hall?

Especially as the Fanno Creek Trail crosses Hall at this point– it’s as much a pedestrian crossing, mid-block, as the one shown in the article on Barbur.

While I would love to see this too, I think the traffic engineers will balk as the light at the Albertsons is so close. It would be great, however…

ODOT has no jurisdiction over Hall – the proper folks to ask about that would be the City of Beaverton. ODOT can only put these signals on state highways.

Enforcement will be critical, if this design is to make any difference. Pedestrians will still have to look out for drivers who won’t stop, flashing lights notwithstanding. On wide roads like that with high speeds limits (that I’m sure are violated all the time), I”d wonder if anything short of an actual red light will make a difference, and even then, I see far too many drivers running red lights. I wouldn’t want to cross there.

It does work very well ther however the road is striaght and the area was all ready known for traffic violation stings.
This area on SW Barbur has no obvious place for a cop car to park, not in the road, hidden or otherwise.
It will be very hard to set up a speed trap here and we will need at least one hidden cop car to make this stick in driver’s minds.

There’s a lot just north of this crossing, on the west side of the road – there are police there occassionally, so hopefully this will encourage them to step up the monitoring of this road.

This crossing would be a great place to disguise a traffic cop as a homeless person.
Give’m a radio and camera phone link to a small pool, 3~5, of police cars waiting out of site ahead somewhere they can park.
Radio ahead violator’s vehicle image, rough driver description and what ever else is needed to make a ticket stick.

Enforce with out warning.
Enforce continuously for at least one day; repeat within one week.
Apply maximum fines.

I’m with Kiel, and I’m celebrating. This is a very advanced system that has been shown to significantly increase yielding behavior by cars*. When we were asking for an improvement to this crossing, this is specifically what we were asking for. Possibly better, because ODOT actually improved on the best available design by adding a third beacon in each direction. Plus advance warning for oncoming cars – reducing rear-ending accidents.

* For a thrilling read, see the Federal Highway Administration’s 2008 “Effects of Yellow Rectangular Rapid-Flashing Beacons on Yielding at Multilane Uncontrolled Crosswalks” – documents in-field studies showing an increase of over 88% compliance of yielding by cars using a 4-signal RRFB system (18% compliance with just a regular sign, like we have now).

I was at the meeting last night (yes the back of my head is in the lead photo!) and agree that this is a very good solution. They are seeing super-high compliance rates with these beacons. The only thing better is a stop light, and, regardless of money, there isn’t enough pedestrian traffic there to make it happen.

Correction about the timeline: If I remember correctly, the pot of money this will come from will not be available until July 1, so that’s when construction would start, not finish…

Also at the meeting: I was happy to hear that PBOT is working hard with the neighborhood organizations, like SW Trails, to get bikeways/greenways into the difficult SW area. I should have a greenway by my house next year!

Now if we could get Beaverton to but bike lanes on Garden Home, life would be perfect 🙂

Why didn’t they just put in a stop light ? There would be no need for all this fancey business. Most mv operators know about red lights.

Two reasons: 1) They said for a ped-only stop light, there had to be a certain volume of pedestrian traffic, and this crossing doesn’t meet the standard, so it was a no-go. Even if it was, 2) it costs way more, so would not have been done for some time. So, what would you prefer no changes for a few years, or this now?

Red lights make all traffic stop until it times out. These lights alert highway traffic that a ped is crossing, or is about to. No excuses for not stopping, but no delay beyond just letting the ped cross. As applied in other states, this means traffic can proceed as long as they comply with existing crosswalk laws, even if the lights are still flashing. Not sure exactly how it will be enforced here.

These are really effective for crosswalk compliance, and have an added value (my opinion) in drawing attention to pedestrians, (the flashing lights say “SOMEONE IS CROSSING THE ROAD RIGHT NOW”) and not just making people stop and “wait for green”.

And separately, we should never again put a road with > 4 lanes in the city of Portland. Ever.

I’m so with you on this one. Too many lanes!

Not bad, but it needs to have crossing guards lower when someone hits the button, like at a RR crossing.

Now that would be impressive

Good news for Southwest Portland. Well done, everyone who contributed their voices to this project.

I was at the meeting in SW as well, and appreciate ODOT’s work on this location.

Someday, traffic calming might be implemented, if high capacity transit is built in the corridor. Until then, just lowering the speed limit will not help due to the number of wide lanes, but there is plenty of room for a motorcycle cop to chill out at the TriMet bus stop (# 155) at this crossing location!