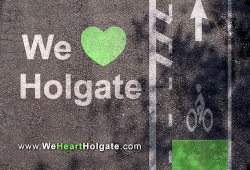 The buffered bike lanes on SE Holgate are finally getting some love thanks to the grassroots “We Heart Holgate” campaign.

The lanes — which were part of a $30,000 road diet funded by TriMet — didn’t get much attention when they debuted back in August 2009. Then, KATU-TV’s infamous Bike Lanes to Nowhere piece stirred the pot and put local opposition to the project front and center. A few months later, a very angry and vocal crowd showed up at a public meeting hosted by PBOT to discuss the lanes. Local residents, organized in part by RestoreHolgate.com, were upset that PBOT did not give them enough warning about the project. They also complained that the new bike lanes weren’t used and that they increased congestion on the road. 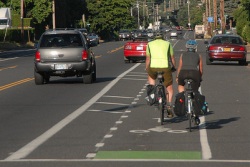 At a follow-up meeting in July of last year, PBOT admitted they could have done a better job with public outreach before the lanes were put in. Despite that admission, anger simmered with some local residents.

This new campaign by an informal group of citizen activists (with organizational support from Active Right of Way/AROW), is aimed at spreading love not just for the Holgate bike lanes, but for buffered bike lanes throughout the city. From their website:

“[We Heart Holgate]… is aimed at improving the local image of the lanes, show appreciation to the City, and to organize the supporters in the area… There is no need to be an east Portland resident to support these lanes. The improvements they bring should be available to all of Portland.”

Activists behind the effort have mailed a postcard supporting the new design of SE Holgate and they have written letters of support for the project to local elected officials and city staffers that were behind the project. They also have a new website and online petition.

After the last public meeting about this project back in July, PBOT said they’d perform a thorough analysis of the project, address concerns of angry residents, and report back to the neighborhood in February 2011. It seems like this campaign is starting up in advance of what could be the re-opening of the debate on this project.

This is just an informational campaign for now, but as public events around these lanes and others like them happen, we hope to organize the supporters to show up and make their presence known.

Check out WeHeartHolgate.com and stayed tuned. Learn more about the project in our archives.

I said it before – if the angry citizens of Holgate truly don’t want the bike lanes, please PBOT – please – just tear them up and bring them north to SE Stark. The people of “Starkwood/Gateway” love the idea… and we love you too!

You don’t have to hang out with angry folks who don’t understand the big picture. You don’t have to sit calmly while they spit vitriolic personal attacks, accuse you of communism and regurgitate Lars Larson’s BS at your meetings.

If you host a meeting to make even one road in our neighborhood more liveable and safer, we’ll bake YOU cookies and bring YOU hot cocoa!

I’m in! always good to see the people that don’t want things changed getting organized to keep what they have… so often it’s only the “against” crowd that feels the need to be heard…

Living on Holgate, the new bike lanes have greatly improved my health and pocketbook, I was a daily driver, now I use less than a tank of gas per month and ride my bike almost daily to Sellwood. When I first moved there I sold my bike, no way could I compete with all that car traffic.

It dosen’t look like there are very many people sharing the love on this one. Did PDOT learn anything from this?

I think PBOT they just felt the sting of the “talk radio” mentality and were reminded they need to tap that silent majority – yep I used that term- so the good things we do in our part of the world don’t get derailed out of party-line BS. The people against the bike lane – from where I sit – they aren’t the majority- and a lot of early complainers – they were fired up going to the meetings – but a lot of folks left kinda, “Oh that’s what they meant… well… gee… that’s not what I thought they were up too. Actually sounds like those businesses will benefit… But where’s all the hippies?”

My 2 cents – purely from observation… anecdotal of course. But my gut agrees…

Thanks to AROW for giving people with positive responses to this project a platform to share their comments.

The support of appreciative neighbors, as well as countless people who use the corridor to pass through the area, can be drowned out by vociferous and vitriolic opposition at a town meeting. They’re much louder. But non-shouting voices deserve to be heard by PBOT, too – and to judge from the responses on the petition page, they are out there en masse.

Nice work, AROW! Good to see the campaign happening, and I like the design of that postcard, quite a bit.

I’d be willing to bet there is, along Holgate, plenty of support for the cycletrack, even among people who don’t bike. If only because of the extra traffic calming the cycletrack brings; it seems like someone there must have figured out that a quieter street is better for property values.

But it’s the nature of neighborhood dynamics – of having to live with the people on your block, for potentially a very long time – that if one loud-mouthed crank makes a lot of noise, those possessing an opposing view may not be too motivated to butt heads with said crank. The quiet supporters of Holgate’s cycletrack aren’t going to rally up, and face off against their angry neighbors.

I think what’s needed is a marketing-type survey that seeks out opinions of Holgate residents, that goes door-to-door to them, calls them, and emails them, and then distills the results into something more meaningful than the rantings of the loudest voice in the room.

I ride this section of Holgate for my commute on occasion and love the buffered bike lanes. Glad to see they are getting some community support.

Thanks for the support! We believe many, many neighborhood residents are sharing the love on this one, and are working elevate their voices in this process.

The Holgate Ave buffered bike lane project is a resounding success which has made the street a much calmer place for all road users.