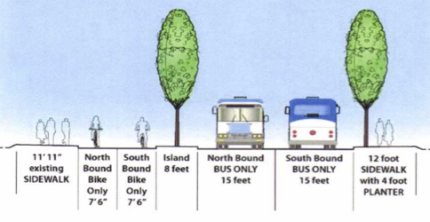 A new path that would connect SE Clinton Street to TriMet’s planned Willamette River Bridge near OMSI is in the running for a $1.9 million federal grant. This image, taken from the application by PBOT, shows a two-way cycle track that is planned for SE 7th Avenue.

Several major non-motorized transportation projects in the Portland area are in the running for federal funding through the Transportation Enhancements program. To help with project selection, the Oregon Department of Transportation (ODOT) has opened up a public comment period and launched an online survey to gauge public support.

Across Oregon, 85 projects worth about $92 million have advanced to the public comment phase (see full list here – PDF). ODOT has only $16 million available to hand out. Historically, TE grants have been a key source of funds for biking and walking projects.

Below is a summary of the non-motorized projects up for funding in our region: 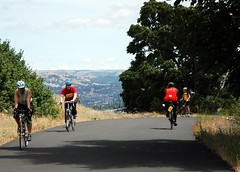 ODOT wants to extend this trail east of Moffett Creek.

ODOT has applied for $1.25 million to complete 750 feet of the Historic Columbia River Highway State Trail. The money would be used to build a 12-foot wide multi-use path extending west from where the trail currently stops at the Moffett Creek Bridge. Completion of the path would mean that people on bikes would no longer have to ride on the shoulder of Interstate 84 in this segment of the trail.

TriMet and the City of Milwaukie want $1.4 million to build the Kellogg Lake Multi-Use Bridge and Trail Connection. The bridge would serve only non-motorized traffic and would connect the Island Station neighborhood and the upcoming Trolley Trail with a planned light rail station near downtown Milwaukie. 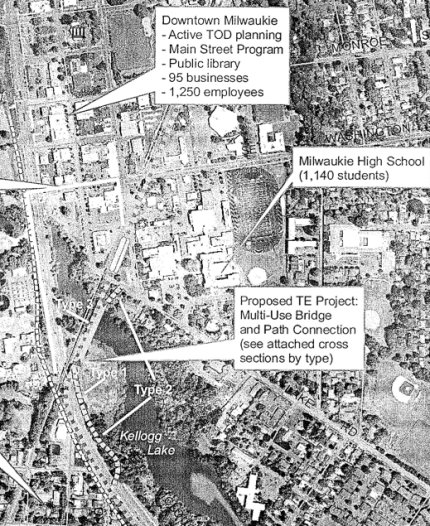 The City of Portland Bureau of Transportation (PBOT) hopes to nab about $1.5 million of TE funds for their Safe Routes to Schools program. Their application asks for new sidewalks, traffic calming, storm water management and bicycle marking improvements on SE Holgate and SE Ramona in the Powellhurst-Gilbert Neighborhood in East Portland. The project is intended to improve safety for the 2,000 students that attend Gilbert Heights Elementary, Gilbert Park Elementary, and Alice Ott Middle School.

PBOT has applied for $1.9 million in funding for their Clinton to the River Multi-Use Path project (we last mentioned it back in August). The project calls for 2,000 feet of path, a bicycle boulevard treatment, and safety improvements to create a “direct low stress corridor” next to the planned Portland-Milwaukie Light Rail line. The new path would connect inner southeast neighborhoods with TriMet’s new carfree bridge being planned over the Willamette River near OMSI. In their application, PBOT says this would be a “critical segment” and would provide a seamless connection between eastside bicycle routes, the Springwater Corridor, and the bikeways on the west side. The project includes a two-way cycle on 7th Avenue.

The City of Hillsboro has asked for $240,000 to create an “active transportation” map, a comprehensive wayfinding signage plan, and a public outreach program to educate people about biking, walking, and taking transit.

The Oregon Parks and Recreation Department has requested $1.6 million to help build their Cazadero Trail Bridges project. This project consists of over a mile of 14-foot paths to cross a creek just north of Highway 224 near Barton on the Cazadero Trail. This trail would further connect the Springwater so that you could ride from downtown Portland all the way to the Clackamas River (and eventually all the way to Mt. Hood!).

You can download all the TE grant applications from Oregon here. ODOT will be taking feedback through their online survey until January 28th. ODOT TE program manager Pat Fisher says the survey allows them to easily compare a variety of information about the feedback, but also, “The… prevailing reasons for supporting or opposing a project.”

done with the survey… didn’t take as long as I thought it would… and anything to help sway money towards the projects of my choice… (:

another great dose of info. Thanks bikeportland

Were any of these projects part of the cuts in order to fund the new max extension or are these extras?

Both the Kellogg Lake and Clinton projects were envisioned to be built in conjunction with light rail but were not part of the construction budget, so no, they were not cut.

And should Portland’s highway engineers require any advice as to the correct layout of a cycle lane, particularly where it may intersect with pedestrians or a normal road, they can always consult the designers of this one:
http://homepage.ntlworld.com/pete.meg/wcc/facility-of-the-month/

And 2 years after it was approved, the Clinton Street Enhancement Project has still never been built.