The Transportation Options Division of the Portland Bureau of Transportation (PBOT), has released the final report on its SmartTrips Green Line target area.

The SmartTrips program (in its eighth year) aims to educate Portlanders about their travel options with a goal to encourage more biking, walking, and transit trips. The latest target area was along the Green Line MAX corridor in East Portland, on both sides of I-205 from NE Sandy Blvd in the north to south of SE Foster Road and between NE 72nd Ave and NE 122nd Ave. About 8,200 households in the target area (about 25 percent of total households) took part in the program and PBOT spent $213,270 to carry it out. 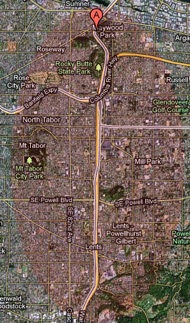 SmartTrips Green Line began with a “before” survey in September 2009 and ran through October 2010. PBOT’s final report shows that residents in the target area reduced their drive-alone trips by 18.4 percent and increased their “environmentally-friendly modes” (biking, walking, transit and carpooling) by 30.4 percent.

To encourage participation, Options staff got out into the neighborhood by tabling at events, leading bike rides and walking tours (95 events were held over the course of one year), passing out free maps and much more. There is also a large direct mail component that allows people to custom order a number of items and have them personally delivered. 189 local businesses also joined forces with PBOT to promote transportation options to their employees and customers. 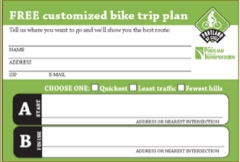 PBOT estimates the program helped save over 48 million Vehicle Miles Traveled (VMT) in 2010, which is equivalent to shifting over two trips per week, per person in the target area from driving alone to a more environmentally-friendly mode.

Here are some other interesting tidbits from the report:

And here’s a stat from the program that shows one of the major intangible benefits of the work Options does:

About 900 unsolicited positive comments by area residents showed that the program not only garnered the desired mode-shift changes but fostered a positive attitude toward the work that the City of Portland is doing to make their communities a better place to live.

I love SmartTrips. Way to go PBOT guys and gals!

Sounds like that was $200,000 well spent! Some nice advance work with the green line opening.

Way to go Options crew! These people are always working hard to come up with great new ideas and it sounds like it paid off. Right on!

This is great news! Someday I hope they have enough resources to focus on more than one neighborhood at once.
Goes to show that getting people to use “environmentally friendly” modes of transport isn’t just about painting new bike lanes.

awesome. they came to my house with a free pedometer, reflective wristband thingie, etc.
I hate to tell them, I’d have ridden all over regardless!! But it was nice and I do my best to pass on the zeitgeist out here in inner outer SE.

Transportation Options is one of the true wonders of the city’s efforts to promote bicycling.

Because, to get people riding bikes, you really need to make sure they have the information they need, and have a one-on-one interaction with someone else to learn the specific things they’ll need to know.

Without one-on-one interaction, their first ride will probably be Hell. And there might not be a second one.

With one-on-one, they’ll get good suggestions specifically tailored to their age, ability, goals, etc., and saunter off some Sunday and have the time of their life.

Without Transportation Options and their massive outreach, I really don’t think we’d have seen the massive increases in bicycling in Portland.

I wrote a piece on this a year ago for the BikeTemple blog — http://biketemple.blogspot.com/2010/03/bicycle-evangelism.html FWIW

so I was the perfect model for their program, but I was never even it… I did it all on my own simply because of the “if you build it they will come” process…

PBOT’s Options Division should be the center of the transportation bureau’s work in the 21st century…and its budget should reflect this. Smart Trips, Sunday Parkways…they are the future. Sam needs to give them more resources!

I participated in a similar program targeted at new residents (i.e. people who moved) in other neighborhoods. They dropped off maps and some delicious swag for me, which didn’t have the impact of a personal interaction but was still nice.

I’d rather have more cycletracks personally, but I understand that (a) infrastructure is really expensive and (b) we need both infrastructure and outreach.

Great news and a job well done. My nitpickiness compels me to note the rather huge factor that the Green Line was launched at the same time (which the report doesn’t shy from but this summary leaves out). The PBOT team did a great job but I don’t think the outreach arm would want to take full credit for what was definitely an effort of outreach AND infrastructure. So Kudos to all. PBOT & TriMet.

Wow, that’s awesome. We can all learn from Options’ actions.

Sorry to rain on the parade, but it appears the sample size was too small and too few households were surveyed before and after the effort. At least that’s the way I read the Appendix and the Report. I fear the statistics are meaningless and the conclusions are based on wishes rather than facts. There are far too many factors besides the Smart Trips program that were not considered, but which could have accounted for the statistically insignificant change in trips. Oh, well.