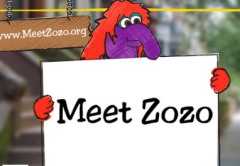 Streetfilms looks to get ’em while they’re
young with Zozo, the livable streets mascot.

– Some (very) large companies are finding it beneficial to encourage employees to bike to work, and to stay active in general, in part as a way to control rising health care costs.

– After discovering that nearly half of bicycle deaths in London each year involved freight trucks, the city’s mayor has called for a ban on the heavy, high vehicles, saying they are incompatible with city streets.

– A roving urban planning student is looking at bicycling infrastructure in Europe, and finding a lot to love in some countries, room for improvement in others, and a lot to blog about everywhere–here’s his take on Italy’s bike-ability.

– Scotland’s big cycling advocacy organization has launched a major campaign against electric cars, saying they distract money, energy, and political will from biking and walking.

– After finding out that everyone, regardless of modes, misuses NYC’s bike lanes, the Don’t Be A Jerk campaign is being launched to target people who ride bikes.

– On Staten Island, a bike lane has been removed from a major thoroughfare to make way for a bus lane. People on bikes will be rerouted to nearby multi-use paths that close at dusk.

– A traffic engineer comes clean about the dangers and damage of the road building standards he used to unquestioningly enforce in the name of safety.

– An architect did a survey of the various kinds of custom bicycle businesses he found on the streets of China, including bikes for vending food, dispensing water, and dust collection.

– While heavily investing itself into its image as a developing country that leads in sustainable energy, Chinese cities have been trading in their hordes of bicycles for luxury sedans and nightmare traffic jams, points out a horrified reporter.

– Meanwhile, also in China, a wealthy young man drove into two students who were walking in an alley, killing one, and fled, creating huge rumblings of class-based discontent.

– America Walks, the country’s only national pedestrian advocacy organization, is reinventing itself as a coalition and launching two new campaigns that focus on creating safer streets and increasing pedestrian access to jobs.

– There’s a new livable streets advocate on the block–kids are loving the giant, purple Zozo, who only appears in walkable, bikable urban spaces.

All Tri-met buses are chained this morning and limited to 25mph due to the threat of snow today. Might cause more leapfrogging, being closer to bicycle speeds.

There’s some good tidbits in the “… Chinese cities have been trading in their hordes of bicycles for luxury sedans and nightmare traffic jams …” story:

Not exactly sure how the following so called Chinese saying fits the story, but it’s interesting:

“But you can’t spend 10 minutes in Beijing without coming to the conclusion that China is hell-bent on pursuing exactly the same development arc as any other decadent, luxury seeking Western country. …

… Millions and millions of bicycles have been traded in for sleek sedans.

And there is not enough room for them. …”

from comments to the story:

“… On a collateral note, has anyone ever explored the smog-clearing benefits of using the lungs of bicyclists and pedestrians as air filters? …” —Silverback66

“… A professor of mine used to talk about how, while China’s average per-capita is pretty low, the population of upper and middle class people is larger than the entire population of the U.S. …” —tonydavisnelson

Noting the traffic engineer’s post, in the town I live in now the streets work very well for moving pedestrians, cyclists, or cars, adding either of the other 2 to the cars is a disaster.

londons bike messengers have been clamoring for long lorries to be banned from central london for well over a decade – because their (and my) friends and coworkers, and other cyclists, have been killed by them too many times. about time the mayor catches on to what anyone on a bike in london has known all along. too late for joe cooper, paul ellis, mark francis, edward newstead, sebastian lukomski, and calvin simpson.

imo, large trucks should be banned in pdx too. these vehicles have large blind spots that make seeing vulnerable road users nearly impossible (in some circumstances).