“If the person looking to buy my bike from Goodwill hadn’t checked your site, I would have never recovered it… Thanks!”
— A happily reunited bike owner

It’s been a while since we mentioned our Stolen Bike Listings or shared a stolen bike recovery story. I used to keep track of every recovery, but after we had about 20 or so, I stopped counting and they didn’t really seem like news anymore.

But just in the last few weeks, we’ve confirmed three recoveries. They made us feel so good that I thought it’d be fun to share the stories with you. Each one shows that a combination of serials numbers and Good Samaritans are sometimes all you need to get your bike back.

Mike gets his bike (and a new light!) back 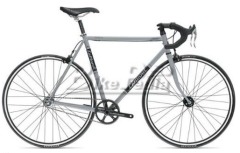 A few days ago, Mike Burnett got an email from a woman claiming to have his stolen bike (a $900 Lemond Fillmore). She emailed Mike saying she had acquired his bike from a co-worker who was fired for theft, so she became suspicious of where it came from. When she searched the bike’s serial number, Mike’s stolen bike listing came up. From there, Mike and the woman got in touch.

“Sorry for your loss,” the woman wrote via email, “I hope that I can help reunite you with your bike.”

Here’s what happened next (as shared with us via email from Mike):

“I wrote her back and told her that it was indeed my bike and offered her the original $100 reward I had intended. She called me back and she and her friend brought the bike over the same day. The bike was in great shape with all the same parts as when it was stolen. The only difference was it had a new front light installed by the thief!”

One of those “too good to be true” deals

The next story comes from a reader named Drew, who got his Trek 1.2 road bike stolen near SE 29th and Belmont on November 9th. When someone purchased the $800 bike for $175 at the Lloyd Center MAX station they thought the deal was too good to be true. When they got home and searched online for the serial number, Drew’s stolen bike listing came up. Drew got a phone call from the Good Samaritan, gave him $175, and got his bike back.

“So the site really does work,” Drew shared with us via email. “Thanks so much for all the effort y’all are putting into it.”

Goodwill hunting by a Good Samaritan 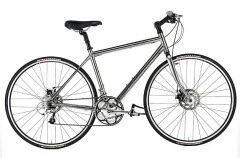 Reader David M was shopping at the Goodwill bins on November 3rd and saw a Specialized Sirrus Sport “in perfect condition.” When he asked one of the employees if the serial number had been checked prior to setting it out for sale, they said it had been; but when he went home and Googled the model name, our stolen bike listing popped up. “The serial number was different by one digit,” David said, “so I phoned Goodwill, I emailed the bike owner, and last night I received the good news from the bike owner that she had received her bike back!”

We also heard from the bike’s owner, Sarah Abbott. She said she never wrote down here serial number and the one given to her by the bike shop she bought it from was wrong, “leaving my police report useless” (also explaining why Goodwill didn’t know it was stolen). Sarah says her bike (which retails for about $1,000) was stolen and then left on a TriMet bus and eventually given to Goodwill. “If the person looking to buy my bike from Goodwill hadn’t checked your site, I would have never recovered it. Goodwill was kind enough to let me look at it and prove it was mine. In closing… Thanks!”

At last count, we had about 2,556 stolen bikes listed on this site since I first launched the service back in September 2005 (there was a long hiatus when they were broken and no listings were taken). The key to their success has always been awareness of the listings themselves and then having people go the extra mile to help out a stranger.

Thanks to everyone in the community that keeps eyes peeled for stolen bikes and who takes the time to search online when something seems fishy. Also, a big thanks to Bryan Hance, the man who created the Stolen Bicycle Registry and who has helped us improve our listings and make them even more effective.

Ditto. A few months ago I was able to help someone get recovered with his fancy Felt cross bike. Bought it from a kid downtown for $20. Thanks for the stolen bike listing!

These are great feel-good stories though it’s always a little too bad there isn’t justice for the thieves.

Write down your serial number!

A bike was dropped off in the bushes next to my home in SE on Monday night. My guess is that it was a stolen joy ride (I can’t see any other reason there would be a bike in my bushes). The serial number doesn’t come up as stolen but that don’t mean a lot. Nobody gets rid of a nice bike just because of a flat. I posted it on Craigs list but no one has contacted me yet.

Great stories – thanks for sharing the successes!

So the moral of the story seems to be : If you see a ridiculously good deal on a bike in Portland, you should buy it on the spot, and then check the stolen bike listings. The one at Goodwill bins was lucky, as someone else could have easily purchased the bike before the Good Samaritan got back in touch with them…and honestly – I am surprised that it was at the Bins – I would think it would be at a regular Goodwill retail store.

Steve B
Reply to  jv

I had the same feeling. Instead of refusing deals that are too good to not be stolen, I might just buy the sucker and reunite the owner.

If your bike is stolen another thing to try is setting up a google alert for any craigslists you think it could show up on. You punch in keywords (like descriptions of your bike), and you’ll get alerts if someone posts something with those keywords. Enter this as an alert:

You can subsitute portland for seattle or whatever. Luckily haven’t had to use it for this purpose, but great for getting notifications of other stuff (jobs, stuff for sale, etc.)

You and I have taken a similar plan, but I’ve added some stuff in (this is one of the ones I’ve been using for my stolen Trek District):

site:http://portland.craigslist.org/*/bik [trek OR “single speed” OR district OR parts OR orange]

Using /*/bik lets you search all of the Portland area ones at once, followed by search terms in brackets

Although reuniting a bike their true owner is genuinely awesome, doesn’t buying the stolen bikes continue to perpetuate more bikes getting stolen by creating a market for stolen goods?

It’s pretty tough to accept that trying to do the ‘right thing’ could lead to more bikes getting jacked.

No doubt the headlight on Mikes bike was a stolen item also. Where does that put Mike now being in possession of stolen property?

It’s possible the headlight was stolen but not with absolute certainty. I think Mike can enjoy his recovered bike with a clear conscience.

I wish when you listed these heartwarming stories of bike recovery, you would include detailed accounts of HOW the bikes were locked up (or not) when they were stolen.

Nine times out of ten, cable locks are to blame. Yet thousands of bicyclists in Portland continue to use these shitty cable locks – than can be cut with a pair of two dollar frickin’ Wal-Mart PLIERS – day after day after day for their bicycles.

A BikePortland article on how to lock up your bike so it doesn’t get stolen in the next twelve seconds wouldn’t go amiss.

Theft details/prevention has been featured on this site more than once, as I recall. It bears repeating, no doubt, but it’s not like Jonathan hasn’t made an effort already.

I thought about trying to surreptitiously take a photo of the seller with my mobile phone.

Of course, pulling out a camera will probbly cause a bike thief to skitter back into the alleyways he lives in.

Along with the other info a bike owner inputs on the Stolen Bike Listings, I’d like to see a line for “Lock Type Used”. I bet the majority would be cable locks. Got a nice ride, then spend a l’il extra for a decent U lock.

Hell, even if your ride isn’t particularly nice, you’d like it to be there when you want to go home, right? Use a decent lock.

very informative post.keep it up

Stripes – I ask for a ‘Stolen from?’ when people register on stolenbicycleregistry.com – and while I haven’t crunched the data it’s worth noting that lots of bikes are taken from ‘safe’ places where a lock isn’t even used in the first place: work parking/storage, attached garages, inside of cars, & shared apartment basements.

Even when you think a U-lock might be overkill – it isn’t.

I recently was terminated from my bike shop job of 3 years because I recovered a mt bike worth over 5k by confronting the “new owner”(thief) in the store. How bout that……? Still unemployed…….

This only reafirms the need to have bike registration. It would be easy to determine if a bike is stolen and who the owner is. You won’t have to worry about if that $20 treck a garage sale is stolen. just enter the registration # on your blackberry and you will know right away. This is cheap insurrance and is too good of a deal to pass up on.

That is one very good reason to register a bike, but does not reaffirm a need (what was the first affirmation?) for requiring everyone to do it.

this has been brought up before. some people whined at the idea saying it was an unfair tax… disregarding the positive benifits of bike registration

“Even when you think a U-lock might be overkill – it isn’t.”

its not safe to leave your bike locked up in a low traffic area for any length of time no matter what lock you have.

many bike thieves want your components. its trivial to just brake/snap the frame and slip off the lock. u locks can also be drilled out or cut through far faster than you would believe (diamond drill bit, cutting dremel, angle grinder).