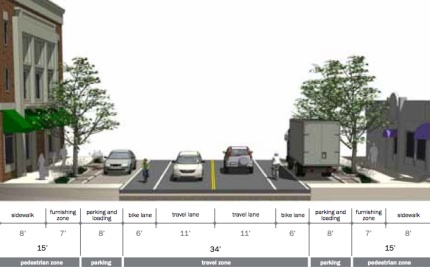 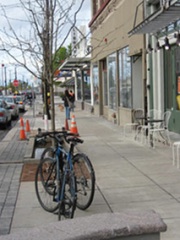 North Portland’s Kenton Neighborhood (which happens to be home to Mayor Sam Adams) will host a ribbon-cutting celebration tomorrow for the completion of the N Denver Avenue Streetscape Project. The $2.85 million project was funded by the Portland Development Commission (PDC) as well as a grant from the Oregon Department of Transportation (ODOT). Construction management was provided by the Portland Bureau of Transportation (PBOT).

The overhaul of N Denver (from N. Watts to N. Willis) marks the continued resurgence of Kenton and the project comes with all the familiar trappings; new public art, freshly planted street trees and other vegetation for stormwater treatment, and charming new street signs and furnishings (including more bike racks). The project also comes with a more humane and livable street cross-section.

The “chicane” design was not chosen.

To make Denver a safer and more appealing street for all road users, PBOT has added curb extensions and zebra-striped crosswalks at every intersection. They’ve also removed the center turn lane and have widened the spaces for biking and walking. The bike lane on Denver has been widened to six feet (from five) and the “pedestrian zone” — which consists of an eight foot sidewalk and a seven foot “furnishing zone” — is now 15 feet wide (up from 10 feet).

Project staff to a close look at three streetscape design options before they decided on the one above. The chosen option is the only one that increased the width of the bike lane, but it’s also the one that does the least in terms of calming motor vehicle traffic (PDC lists “speeding may continue to be a concern” as one drawback of this option). One option explored was to give Denver a “chicane” created by alternating sections of angled parking. The other option was to include a small median in the center of the street to provide more space between motor vehicle traffic.

Even without more pronounced traffic calming measures, the new streetscape seems like it will be a big improvement over what existed before.

What do you think? Do you ride on N. Denver through downtown Kenton? How do you feel about the changes?

— Learn more about the project on the PDC website.

Our family frequently bikes to the library and the businesses along N. Denver. The improvements came in a timely fashion and make us feel safer walking and biking the neighborhood. My one complaint would be the HUGE trucks rumbling down N. Denver like they’re making shortcuts to other streets like N. Lombard. Was or is there any attempt to restrict the size and weight of the trucks?

Thanks for the comment. I am not sure about your question, but my hunch tells me that the opposite is true… that project staff wanted to make sure that some large trucks could maintain easy access to the street in order to service local businesses.

For more insight, we can look at the Streetscape Plan document, which states that all design concepts considered, “accommodated over-dimensional (high and wide) trucks.”

That being said, I’m sure that Denver is an appealing cut-through for semis given that Lombard is a state highway and a MAJOR freight route and Denver is a nice, straight shot onto I-5.

Corvallis put in some angled parking with a bike lane behind it and I really don’t like it. The door zone is pretty bad on parallel parking, but worse still is angled parking where it is impossible for drivers to see you as they start backing out if a car is parked next to them. I think the best solution if angled parking is required might actually be some sort of angled back in parking so that when cars go to leave they can see where they are going.

I found that downtown with back in parking in a truck you have to remove your seatbelt and lean way forward to see when pulling out. It’s not the safest system

I mostly walk around the neighborhood, and the sidewalk improvements are much appreciated. It’s also a very pleasant facelift just in aesthetic qualities. Autos do seem to be squeezed a bit more than before as well, which is always nice.

There’s certainly no denying that this neighborhood is still surrounded by very automobile-dominated roads (Lombard, I-5, Columbia, and Interstate to a lesser extent), but it’s great to see steps toward something better.

Just a week ago I found myself up in that neck of the woods. I felt it more than saw the changes. I love the new roomie sidewalks!! I used to live in Vancouver about 3 years ago and would take the #6 through there into downtown, as well as bike in that area. Back then it wasn’t a place I wanted to hang around long, but I love it now!

I really quite like the way it looks. The speeds come down fairly substantially once you get toward downtown Kenton.

If they could be stopped from cutting into the bike lanes at Denver and Interstate, it would become less convenient. But paint doesn’t stop trucks. It’s a shame too because they diminish the atmosphere for outside dining and drinking in the area.

That was just a concept that got rejected. The street has the usual parallel-style parking.

Stephanie- #1
One reason large trucks are driving on Interstate/Denver is because they are trying to bypass the back-up on I-5. Once the new CRC bridge is built that traffic will move out of our neighborhoods back onto the freeway where it belongs

I live right on Denver and I’d rather have moderate truck traffic there than a giant monstrosity bridge that will cause all kinds of other problems. Besides, there are other solutions to trucks cutting through neighborhoods.

I like it better than it was before, but the #&#($& 4 way stops are still there. What is the strange PDX obsession with putting a stop sign at every intersection?

If I-5 is backed up, what other solution is there than trucks and cars cutting through your neighborhood trying to get on I-5 at the last onramp? What is your solution?

I-5 is backed up because of Vancouver commuters driving cars and sometimes because of the bridge lift. Both of these have a multitude of solutions other than building a gazillion lanes. Vancouver needs to seriously step up their commuter transit system, because the number of cars going back and forth every day with one person in them is absurd. These opportunistic drivers are not paying the full cost of their destructive mode of transportation, and N/NE PDX residents suffer for it.

Lightrail is not going to have any effect on the vancouverites cutting through your neighborhood. vancouver dosen’t even want it. they voted it down. typical politicians are forcing it down their throats anyways. (hope your not a politician)

It’s not about what they want. It’s about what they’re inflicting on others in order to further their own selfish aims. Something drastic needs to be done about it unless we’ve just decided that global warming and oil consumption/prices don’t matter anymore, and I don’t think we have.

Steve B
Reply to  jim

when did they vote it down? I thought the vote was next year.

maxadders
Reply to  Steve B

It’s my understanding that light rail to Vancouver is a requirement for the CRC to get any federal dollars whatsoever. If that’s true, then it’s pretty much out of the hands of voters.

Kenton has allways had a lot of potential. This re-do has really made it nice. I hope it pays off with a boom to the neighborhood. There are vacant buildings that seem like perfect spots for a lot of different kinds of business to move into, and probably at good rates too. A better location than st johns as it is closer in, next to the freeway…

jim
Stephanie- #1One reason large trucks are driving on Interstate/Denver is because they are trying to bypass the back-up on I-5. Once the new CRC bridge is built that traffic will move out of our neighborhoods back onto the freeway where it belongs

No it won’t, because the bridge will have a huge new capacity, but I-5 through the Rose Quarter will still be a bottleneck that causes traffic jams.

they need to fix that too

JMaus – The Denver Ave improvements are great overall, and I appreciate your piece on it. To clarify, N Denver is a designated over-dimensional truck route, so that was a a design consideration for the City, their consultant team, and the stakeholders. I wish that your article had also mentioned the land use side of the equation. The public investments over the last decade in this area (MAX, the streetscape) have really helped property values and lured new businesses – restaurants, coffee shops, etc. They also were a key deciding factor for the siting of the Kenton Library – which is HUGE for the community and for any Main Street. And all that is bike-oriented development. One more note – the signature piece of art (also done by the same artist who did the reliefs on the stone benches), which I don’t think is in yet (it’s been a few weeks since I was up there) I think is going to have a bike tie-in (but don’t quote me on that).

The design is nice and I always like to see improved riding conditions.

Last spring when the library opened up and Ted Wheeler was there for the dedication, I was unlocking my bike and he and his wife stepped out on the street, looked around and his comment was “We should have put in more bike parking.” I loved hearing that. Can’t have too many bike staples.

It’s been a nice change so far. Now all we need is a bike shop between Posies Cafe and the library!

I moved into Kenton 18 months ago and have always felt that the downtown core was extremely bike and pedestrian friendly. The four way stops keep everyone going slow, in all directions. The new streetscape just widens things out and improves it even more.

My wife and I bought a house in Kenton march 2010 and we stop at the library, go to the park, eat at pizza fino and use MAX alot. I ride my bike to work on swan island.
Love it here and like the work they have done. But think we need more food options and shopping. BIKE shop would be rad!!!!