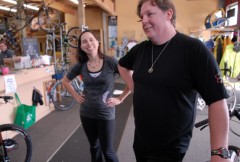 Bike Newport, an independent bike shop based in Newport, Oregon has been named the winner of a 2010 National Bicycle Travel Award by the Adventure Cycling Association.

Bike Newport has received the Sam Braxton Bike Shop Award for “incredible services and amenities that they offer bicycle tourists on the Pacific Coast Bicycle Route.” This is the first time since the awards were first given in 2003 that a shop on the West Coast has taken home the honors. 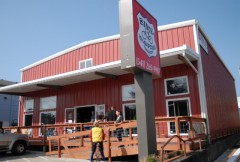 Their big red barn is like a
beacon for road-weary tourists.

We’ve mentioned Bike Newport owners Daniella and Elliott Crowder several times here on BikePortland. In addition to running an excellent bike shop, they are tireless bike advocates. They attended the 2010 National Bike Summit in Washington D.C. and they are also members of the Oregon Bicycle Tourism Partnership. The Crowders also host major event rides at their shop and are highly involved with the local bike advocacy efforts in the town of Newport. 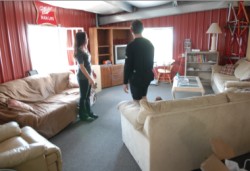 The riders’ lounge is in a well-lit loft
above the showroom.

Bike Newport is not just a successful business that has spurred a nascent local bike scene, but it serves as an oasis for bike tourers on one of the world’s most famous rides — the Pacific Coast Bike Route. When I stopped by the shop back in March, the Crowders gave me a tour of the amenities: An upstairs lounge with several big couches, cable TV and wifi, laundry facilities, a fully-stocked bathroom and shower, and free coffee.

With hospitality like that, they had over 600 bike tourers sign their guestbook in In the summer of 2010 alone. 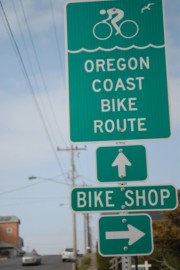 The shop is just a few blocks off
the Pacific Coast Bike Route.

Daniella Crowder wrote us via email today and said that they are “thrilled” with the award, especially after Adventure Cycling told her they received a record amount of nominations.

“We love what we do and get to meet the most interesting people who are traveling all over the world and happy to give them a little respite, great service, and some of the comforts of home along their journey.”

Their success, she says, is due in part because the city of Newport is committed to becoming a bike-friendly tourist destination (which unfortunately is the opposite of nearby Lincoln City). Newport’s new Mayor-elect, Mark McConnell (a rider himself) met with the Crowders during his campaign to learn more about the needs of people who bike in Newport and to see how he can be more involved.

Congrats Daniella and Elliott. Keep the momentum strong out in Newport and thanks for inspiring other shops and advocates across Oregon!

I love these good news stories, THANKS! I’ve done many bike tours and these kind of businesses are rare, but they tend to show up in Oregon more than other places. Thanks to Bike Newport for the little extras that make a large difference to a bike traveler.

I’ve worked with Daniella and Elliot, and they are great people and have done wonders with the bike shop since they took over.

Newport can be proud of all they have done for that community.

Way to go, Elliott and Daniella! Bike Newport is a welcome destination after a day of riding. The upstairs lounge is like the bike community’s home away from home.

I dropped by this August in the midst of my first tour (PDX –> SF). The amenities were impressive! I was in search of a new pair of gloves, but didn’t end up finding anything that fit. Nevertheless, the clerks invited us to use the dryer to get our fog-soaked clothes back to usable condition, and the mechanics were happy to loan me an adjustable wrench. They also happily recommended a good fish shack. Glad they’re getting some recognition!

oh man! we must have been on our little detour through newport and missed the shop when we rode through. next time!

That is terrific! These guys have a great shop, and are always willing to help.

I stopped here in April on my Portland to SF to North Carolina tour. Super helpful folks and overall a terrific bike shop. Congratulations and thanks for the help!

Elliot and Daniella are great. Last year I spent some time up in their loft while en route from Astoria to Ventura. Awesome shop. Congratulations!!!

I am really proud to be the Mayor elect of Newport, and I hope we can put Newport on the map when it comes to “bicycle friendly.” Bike Newport is a great place to stop in, even if you are not into bikes !!!

from what I know of Newport Bike, and from my brief pedal/stay in town, it would be really nice if somehow a Bicycle Hostel would appear. Its a really good idea!

I am so grateful to have a supportive business community and mayor in Newport. I’ll make sure to plan my next coastal outing to this bike-positive city.

Elliott provided mechanical support for our six-day charity ride down the Oregon coast this year (The People’s Coast Classic). He didn’t charge us nearly enough for what an awesome job he did. On top of that, Daniella and Elliott offered to host a party for our riders in Newport next year! The Crowders have hearts of gold! We’ll be working with them for a very long time!

Not to get off topic, but in a bit of sad news, the 2 drowning victims washed off the south jetty in Yaquina Bay yesterday were identified as a southeast Portland husband and wife: http://www.kgw.com/news/1-person-drowned-after-2-swept-into-Yaquina-Bay-107072178.html

I go crabbing off the pier a few hundred feet back into the bay and the waves can soak very quickly without warning.

Newport is fantastic. My uncle used to moor his boat at Embarcadero.

The Oregon Coast is lucky to have such a skilled mechanic & great shop in the delightful town of Newport. Elliott has a keen sense of knowing how to make cyclists welcome & comfortable. As “Head Wrench” for our annual ride from Astoria to Brookings,
http://www.thepeoplescoastclassic.org
we couldn’t have found a more hospitable Oregonian & support person for our innagural Oregon Coast ride to benefit the Pacific Northwest Chapter of the Arthritis Foundation. Congratulations to Elliott & Daniella – recognition well deserved!

awesome!! Matthew and I stopped in recently.. we didn’t use the lounge, but were so delighted to learn about it for future tours. the bike shop is kind of hidden, but right off the 101!

Elliot and Daniella are a truly wonder- filled couple that are a great example of how passion, caring and excellence in a small inedependent business can succeed/triumph in a competitive world dominated by corporations and chains. congratulations