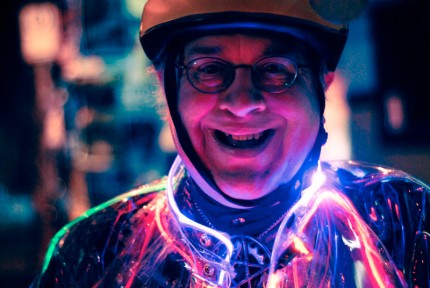 When it comes to being well-lit, Mark Allyn does it with style.
(Photos © J. Maus)

With TriMet’s “Be Seen, Be Safe” event set for tonight (5:00, Pioneer Square, be there!), I thought it’d be fun to delve into our photo archives for some shots of well-lit bikes and the people who ride them. One of the main events tonight is a Lit bike contest that I’m sure will draw some of our local hi-vis experts. 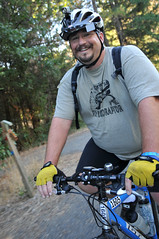 When I think of well-lit bikes, two people pop into my head. One is none other than Jim “K’Tesh” Parsons and the other is local artist Mark Allyn.

Jim is an interesting and very kind fellow who you’ve likely seen at local bike events. He lives in Beaverton, he is (by far) the most prolific member of the BikePortland Forums, and he does more citizen activism for bicycling than anyone I’ve ever met (he’s actually obsessed with it; seriously).

Among Jim’s many interests are making himself and his bike as reflective and well-lit as possible. He has painstakingly layered his entire bike with reflective tape and he has more lighting systems on his handlebars and helmet than I can keep track of. In addition to the tape and the lights, he’s down with the Down Low Glow. When you see him tonight, make sure you say “hi,” but also make sure you don’t look directly into his lights or you could go blind.

No talk of bike lights in this town would be complete without the “master of light” Mark Allyn. Mark is an artist who lives in Southeast Portland. He makes spectacular, light-infused rain-gear and jewelry that always draws a crowd. It will not be possible to miss him at the event tonight (hopefully he shows up!). 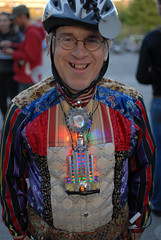 Note the cool, light-infused necklace he made.

Mark and Jim aren’t the only locals who know how to light up a bike. Check a few shots below for more inspiration and don’t forget to roll by Pioneer Square tonight at 5:00 for all the fun, free lights from TriMet, hot cocoa, the Lit Bike contest, and more!

Don’t forget to show up, lights blazing, at TriMet’s Be Seen, Be Safe event. It happens tonight at 5:00pm at Pioneer Square.

WANT the Down Low Glow!!!

I rocked some spoke lights at the Blind Date cross series this year and it was a lot of fun (without adding hardly any weight to the wheels).

It’s a shame that tripods are forbidden to the general public in Pioneer Courthouse Square, there’ll be some interesting photo opportunities there that will be missed without a stable setup.

@5,
BIKES aren’t allowed in Pioneer Square either. I think you’ll probably be able to get away with a tripod tonight. Just make sure it’s well-lit and I doubt anyone will complain!

I’ve been wanting to purchase some very visible wheel, spoke or valve stem lights to complement my head and tail lights. Does anyone have recommendations on products they like?

That first picture of Mark Allyn definitely has a ‘mad scientist’ look. Too Fun!

I have Monkey Electric spoke LEDs on my commuter. They weigh a lot because of the batteries, so I recommend getting two and putting them on opposite sides of the wheel for balance. They sure are bright though, and I get complimented on them all the time.

@Marlowe #7: check out monkeylectric.com for some great wheel spoke lights. A little pricey at $75 per wheel, but they are very effective and eye catching from the side angle. I’ve been using mine for about 4 months now, no problems at all. They do unbalance the wheels a bit, but it’s only noticeable at 30 mph going fast downhill. Not scary side-to-side, just a “pulsed” forward and back feel.

@7:
The BTA will be handing out free “Tireflys,” that mount on SCHRADER valves tonight. They’re green. They blink. They’re worth every penny.

If you want to get fancy, C-Dawg’s right. The monkeyelectric ones are a great pick.

A warning about schrader valve lights that I learned about 4 years ago after Portland’s Night Ride. (I don’t know if they were “Tireflys” or not.) I put them on for the ride and left them on thereafter. I had a flat tire several days later, so replaced the tube. And then I had another flat a few days after that. Puzzled, I scoured the tire looking for the micro-pin without success.

Finally, as I was immersing section by section of the tube in a bucket of water without discovering any hole, I noticed an extremely slow bubbling coming out of the valve.

It turns out the shrader valve light, when screwed all the way down, put just the slightest pressure down on the valve, thus releasing air from the tire extremely slowly. Removing it, and all flat tires became instantly fixed.

I’d like some turn signal lights that are easy and definative; most drivers can’t remember the important rules, why should we think they remember a 100 year old hand. Signal standard?

Also: shameless self promotion of my forum thread on weird bike lights:
http://bikeportland.org/forum/showthread.php?t=3659

@ Marlowe – Those spoke reflectors on K’tesh’s bike are fantastic, and cheap. I got them at Performance in Beaverton. They are a bit of a pain to put on, but well worth it.

@ Marlowe – The reflectors you see in my Mom’s wheel are called “Lightweights For Wheels”. They come in a pack of 80 or so reflectors (adding about 2 grams to your bike).

Clean the spokes. Use the included alignment guide (I mark the spokes using a sharpie pen). Apply.

@ Jonathan – How many lights can a handlebar hold? I’ve had as many as 5 on a bike. Practically I’m using 2, but currently running w/4.

Thanks for all the great tips everyone!

For signaling turns at night I wrap an LED leg strap around my left wrist. For visibility I have a day-glow green mesh vest with reflective strips and rows of flashing LEDs. I’ve had drivers roll down their windows to compliment me on the vest and I often get references to being lit like a Christmas tree. It’s good to be noticed at night. For long commutes dual headlight systems are a must – if one dies you have a backup system. I use a Niterider MiNewt.x2 Dual mounted on a Topeak BarXtender and a Niterider Headtrip mounted directly to the handlebars.