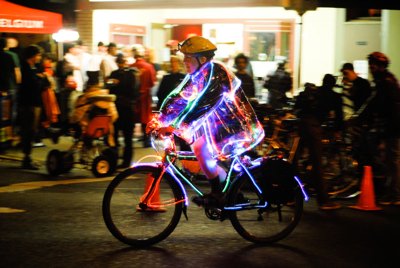 Mark Allyn made his jacket and wired his bike with vivid LEDs.
(Photos © J. Maus)

Often, the most memorable part of bike events in Portland is not just the event itself, but the people who come to take part. Such was the case at Filmed by Bike — a celebration of cycling on the big screen that brought thousands to Clinton Street Theater over the weekend. 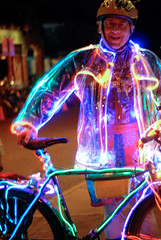 Mark calls himself a “hobbyist” sewer, metal crafter, “clothing artist”, and electrician. If you don’t know his name, you’ll know his outfit and his bike.

Among the many wonderful things Mark has created is a bike and riding jacket that lights up in a stunning rainbow of colors unlike anything I’ve ever seen. Red, green, blue, purple, orange — the streaks of color are intense.

Marks says the bright colors are made possible by fiber optics driven by high-powered LEDs and rechargeable nickel metal-hydride batteries.

Mark commutes around 40 miles every day from his home near SE 42nd and Division to his job as a Linux specialist with Intel in Hillsboro. He doesn’t own a car and says he does the entire trip by bike “at least once or twice a week” (other days he’ll mix bike and transit).

“I haven’t owned a car since 1978 and my doctor says biking has made a significant improvement to my health…he says I’m the poster-child 54 year-old.”

– See more of Mark’s creations at his website, ClearPlastic.org.

Everyone should have one of those jackets! I was so disappointed when I saw that Mark did not have time to accept commission orders. I\’d order one in a heartbeat!

I first saw Mark\’s awesome clothing creations on the World Naked Bikeride, and am happy to see them again here in these photos!

I saw Mark on MAX one a.m. and thought WTF?, another crazy. Seeing it lit up I think, WhereTF do I get me one of those jackets!

I have mixed feelings about this.

I don\’t think that I could feel comfortable rocking one of the jackets, but I really want to know how to do something with the fiber optic lighting along my bike. Anyone know a website that might break down how to setup a system (preferably with rechargeable batteries) like his?

On your left, TRON.

Now seriously, how do I trick out my bike like that? It rules!!

Dude looks about as silly as the other dudes in SPANDEX.

For information on LEDs and fiber optics go to http://www.instructables.com and do a search for those items. Instructables is the leading site on the web for DIY craziness.

You can get a great bicycle el wire kit on ebay for about 14 bucks. It comes with battery pack for aa batteries, zip ties, and about 6 feet of el wire for you to wrap around the bike.

It\’s awesome, and I like it because bikes I see around with it are visible from the sides too.

Actually, Mark\’s webpage has a pretty succint pdf about making your own lighting system like this for your bike.

\”greetings, program!\” followed by a bike bell that sounds like a 300baud modem.

BTW, carless, bikes everyone, DIY lighting system, Linux guy – he\’s about as \”for the people\” and \”countercultural\” as anyone is going to get. I hope I\’m that cool at 54!

Can we get him to come Zoobomb?

\”Actually, Mark’s webpage has a pretty succint pdf about making your own lighting system like this for your bike.\”

Just FYI, I was going to link to that, but then I read that Mark says he doesn\’t use \”El Wire\” anymore (as it shows in the guide), because of his concerns about heat transfer and flammability. Now he uses LEDs instead.

I\’ve definitely seen Mark a few times at night on Ankeny and wondered how the hell he was so lit up. I definitely envy his visibility, but I wish someone would just make fiber optic brake/shifter cables so we could have all the visibility without the clutter.

Thank you very much for a wonderful article on me; and thank you folks for the comments!

I most enjoy working at being different and counterculture in what I hope is a positive way.

Perhaps if I lose my day job, I can make a career out of this 🙂

I walk home every night on SE Lincoln/Harrison from SE 39th to Ladd Ave, and I encountered Mark one night last winter when he was pulled over adjusting one of his headlights (which, by the way, were the brightest I had ever seen on a bike, and on that walk I see LOTS of lighting set-ups). We had a lovely chat about his creations and the need for visibility as a bike commuter. At that time, he was just switching over to the LEDs, and was working on the jacket – it\’s great to see it in full working order!

Very nice jacket. That is some real safety wear. I\’ll bet there are cyclists who are no longer alive who would be alive today if they had been wearing that jacket.

If it\’s not infringing on your money making potential, tell us the basics of how to make lights like that.

This is exactly what the city should require by law.

Now that you have been en-lightened, you have NO EXCUSES!

If you get hit because you are riding at night without one of these garments it is your own fault.