Share of federal bike/walk spending up, and more earmark thoughts

“… But we’re still not really cracking into the heart of the core [federal] programs in a way that our mode share and crash record really demands.”
— Andy Clarke, President, League of American Bicyclists

Number-crunching by the League of American Bicyclists shows that the percentage of funds spent by the Federal Highway Administration (FHWA) on biking and walking projects increased in the 2010 fiscal year (which runs from October 1, 2009 to September 30, 2010).

In FY 2010, the League calculates that the FHWA spent 2.07 percent, or just over $979 million on on biking and walking projects, up from 1.91 percent in FY 2009. However, while the share of biking and walking projects went up, the overall amount spent on them decreased. That’s because the total spending by the FHWA (on all projects) went down over $11 billion between FY 2010 and 2009. 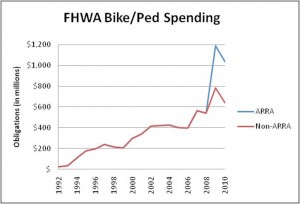 Federal stimulus funds played a big role in those bike/walk numbers. Without stimulus funds, the FY 2010 percentage drops to 1.59 percent. I asked League President (and former FHWA staffer) Andy Clarke for some context on the numbers:

“I think there are two story lines here. First, we’re continuing to eke out a few more dollars each year from the Transportation Enhancements, Safe Routes to School, the Recreational Trails, and CMAQ [Congestion Mitigation and Air Quality] programs; but we’re still not really cracking into the heart of the core programs in a way that our mode share and crash record really demands. However, we are still making progress.

The second part of the story is that we’ve done much better with the stimulus funds (still not good enough though) and I think it’s a reflection of the fact that bike/ped projects are really good for getting quick visible results in the community; that there’s a backlog of good ready-to-go bike/ped projects just waiting for the go-ahead; and the stimulus program is a little more urban-focused and less in the control of the state DOTs. So, lo and behold, we’ve done better. That’s an important lesson going forward for the next transportation bill.”

There’s a lot of chatter right now about how the funding picture for active transportation will change post-election. Central to what’s being talked about is how earmarks — monies set aside for particular projects — are likely going the way of the Dodo bird (as in, becoming extinct). (For more on the earmarks issue, see this analysis just published by Streetsblog DC).

Over the years, thanks in large part to work of advocates, bicycling has entrenched itself into many earmarks. Now, the conventional wisdom seems to be that bike advocates will have to be ready to compete directly with other projects. To the extent that bike projects compete well, this could be a welcome chance to start “cracking into the heart of the core programs” as Mr. Clarke puts it — especially if President Obama decides that ending earmarks and funding infrastructure both have bi-partisan potential.

Here’s another perspective on the earmark issue. It comes from Richard Moeur, Chair of the Bicycle Technical Committee of the National Committee on Uniform Traffic Control Devices (NCUTCD) and traffic engineer for the Arizona Department of Transportation. Yesterday he wrote via a comment on the League’s blog that said in part,

“Given the political and fiscal situation shaping up after this election, it might possibly be a good time to re-assess the relationship at the Federal level, and look to more state & local solutions. Unlike TEA-21 & SAFETEA-LU [the last two transportation bills], the next bill is looking like it may be a tough fight over a greatly shrinking pie – which could end up with entire major programs consolidated or eliminated.”

I’ve been saying for a while now that instead of always looking for (or creating) new pots of money for active transportation, we should ask to re-allocate the existing pie so that it reflects a more balanced system. Perhaps, without as many earmark programs available, that will finally start happening.

Much as I might hope to simplify the federal budget earmarks are going no where.
Put aside all thoughts of corruption for now; earmarks are a power and a loss of them as a tool means a loss of power and a loss of certainty. Both sides fear what the coming budgetary power struggle would look like and all suspect that thet would lose some personal power in the senate or congress.

Fear: for this alone earmarks will remain until both ends of the political public spectrum get fed up and AGREE.

One of the main messages to take away from the changing federal funding landscape is that state, regional and local funding sources are going to become more critical. One, because they will be needed to effectively compete for programs such as TIGER and the ACT Act, if it is included in the next transportation bill, and two because there could be less funding coming from the feds. We need an on-going local funding source that will keep bike and ped projects in the pipeline and help us secure federal funding.