Oberstar’s defeat: Reactions, a look back, and a note of thanks 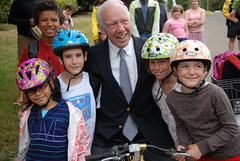 A big surprise from last night’s Democrat drubbing at the polls is that 35-year Congressman Jim Oberstar lost his race to Republican Chip Cravaack. Oberstar lost by just 4,000 votes out of 273,000 cast.

Oberstar’s loss means he will no longer be the Chair of the House Transportation and Infrastructure Committee, a position he has held since 2007. Rep. John Mica will assume leadership on that committee.

But beyond the immediate politics, Oberstar’s loss signals the end of an era for America’s bicycle movement. Oberstar was a titan of non-motorized transportation. The President of the League of American Bicyclists, Andy Clarke, said this morning that, “we lost a star player in yesterday’s elections.”

“As for the defeat of Congressman Oberstar, that’s a real loss. Regardless of party politics, Oberstar was a true champion of transportation issues and his loss is a major blow to everyone interested in the passage of a robust, multi-modal, long-term transportation bill – including bicyclists.” 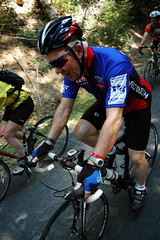 Oberstar, a spry 74, tackling a
steep climb during Cycle Oregon
2007.

Kevin Mills, the Vice President of Policy for the Rails to Trails Conservancy told me via email this morning that with Oberstar’s loss, “It is clear that bicycling has lost a special friend and champion.”

Bikes Belong Coalition President Tim Blumenthal had this to say about the news,

“No elected official has done more for bicycling than Jim Oberstar. The list of bike-friendly programs and policies that he’s championed is long and impressive.”

Blumenthal added that it was Oberstar’s presence in the Rust-Belt that made him such a key advocate for bicycling. “He’s from the heartland of America–not the west, not the frontier. The credibility of someone from northern Minnesota pushing for more bicycling has been very helpful.” 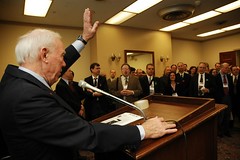 Oberstar, who still gets out and rides well into his 70s, put non-motorized transportation on the map on Capitol Hill. In 1998, he helped pass federal legislation that created the Safe Routes to School program, funding it with over $600 million that has been spent at over 7,000 schools across the country. In 2005, he pushed for the groundbreaking “Non-motorized Transportation Pilot Program” as part of the 2005 Transportation Bill (SAFETEA-LU). That program gave four cities $25 million to spend on biking and walking projects.

Oberstar was also working on legislation that would have created a national legal standard and improved the “rights to the road” for people who ride bicycles.

Just last year, Oberstar pushed for a new Transportation Bill to replace the long-expired SAFETEA-LU legislation. His bill would “go beyond the automobile” with provisions like an Office of Livability and major support for the U.S. Bicycle Route System. With a receptive Democrat in the White House and a reformed U.S. DOT, he felt the time was right to push it through. Unfortunately for Oberstar, the Obama Administration had other priorities in mind for their first two years and his bill languished. (It also didn’t help that Oberstar did’t have any way to fund the $500 billion bill.)

Beyond policy, Oberstar’s role in the national bike movement was one of cheerleader. He was regularly called upon to rally the troops at the National Bike Summit with his familiar cry of “We’re going to convert America from the hydrocarbon economy to the carbohydrate economy.”

On the final night of the National Bike Summit in 2008, Oberstar limped up to the podium just weeks after hip surgery and delivered a rousing speech which left the crowd chanting, “Encore! Encore! Encore!” I will also always remember that day back in 2007 when he gutted out some steep climbs in Oregon’s backcountry during Cycle Oregon.

Even without his presence on Capitol Hill, Oberstar’s legislative legacy and passion for non-motorized transportation in America will persist for many years. Thank you Mr. Oberstar for all the work and support you’ve given over the years.

— For past coverage, see our Jim Oberstar story tag.

Thank you Congressman Oberstar for all of your hard work. I sincerely hope your next endeavor allows you to be as influential in active transportation as this one has.

Very sad to lose such a great voice for the most vulnerable road users. It’s a shame that he’s taken out by a movement was blind to his many accomplishments for his constituents and all americans.

Kudos to an amazing leader, who was an inspiration to us all and helped us believe in the power of Congress to promote great places to live and transportation choices.

And a reminder of the importance of building the power of the electoral side of the biking movement, to ensure we keep such champions as Oberstar in office.

Let’s hope Congressman Oberstar will continue to lead the way for the bicycle movement. He may be out of office but he can still be an inspiration and a champion in the public sector. Who knows… the best may be yet to come… here’s hoping…

35 years definately deserves some time off. Go enjoy life, don’t worry about politics, do some fishing, bike riding, roast some marshmellows.
Thank you for your years of service.

This is so deeply disappointing. Jim Oberstar has done so much for the bike movement, but he has done even more for Northern Minnesota.

As someone who grew up in Minnesota’s 8th district, I saw a lot of Jim Oberstar. I personally give him credit for convincing my parents to force me to wear a helmet as a kid (back when it was NOT cool to be doing it), and saving my skull when I got into my first big crash. He helped to advance the region, and clearly his impact was felt on a national level.

I hope he takes some time, regroups, and helps to advance the bike movement as well as the next generation of progressive Minnesota political leaders. Lord knows, they need it now more than ever.

Damn. Oberstar was our voice. And now he is gone. In the long run, with global warming and obesity on the rise, Oberstar’s absence will be sorely missed. He has done an incredible amount while in office, and let’s hope he doesn’t stop now just because some misinformed voters voted based on what is in their pocketbooks today, and not what is good for them and us in the long run.

Last night I went to be thinking he was going to win. Dang.

Helmets off to Jim. He was my congressman for 26 years and he will be missed in the DFL. He has been at the front for 35 years. Now it is our turn.

Cheers Jim, thanks for the leadership!

I saw him speak at the 2007 Cycle Oregon (after riding a VERY tough ride in the Cascades), he was very inspiring and totally on our side.
He deserves a happy retirement from politics, I wish him the best, maybe he’ll retire to Oregon. Thanks Jim for all you’ve done!

I’m not a fan like most who have posted here. I just think it was time for Oberstar to go, because I believe he has lost touch with what needs to be done in politics, as so do most politicians, I’m afraid. If businesses operated like our government, there would be no America, and only by getting rid of these politicians will our country have a chance of surviving.

Thanks so much for your service, Jim. May our silver lining be that many more reps will need to step forward with their support for nonmotorized transportation now that you’re no longer in a position to lead them.

And you’ve earned a great retirement.