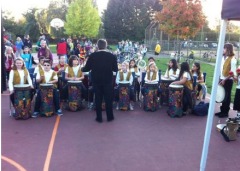 The streets were busy with kids and parents on bikes and on foot this morning as over 60 local schools took part in International Walk and Bike to School Day. From Sellwood to St. Johns, hundreds of people enjoyed a sunny, crisp morning to exercise their transportation options and get to school under their own power.

Here are photos and videos of just some of the action…

Thanks to video ace Dan Kaufman, we can enjoy the buzz of activity around the crowded bike racks of Llewellyn School in Sellwood (the audio is great too, you can hear a giddy kid saying, “I saw you on your bike!” to her friend among other things):

And just for good measure, check out this photo of the packed bike racks at Llewellyn: 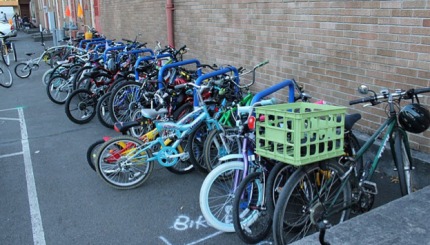 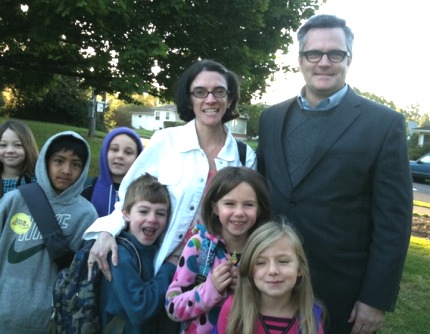 The Tour de Ladd at Abernethy Elementary in Southeast looked to be another big success. Check the 5th graders lining up: 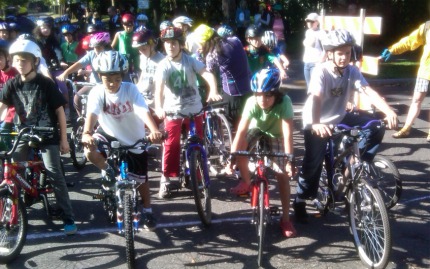 Abernethy parent Shetha Nolke sent in this photo of a bike train: 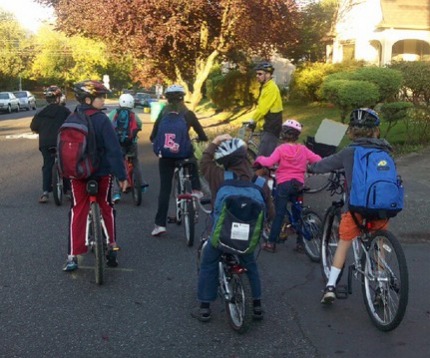 Abernethy even made the morning news! Check this segment from KGW TV :


What if your child goes to school downtown? Can you still bike to school? Heck yes! Look at the crowded racks at Emerson School on the North Park Blocks: 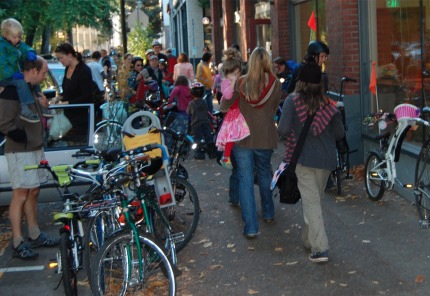 BTA staffer Margaux Mennesson stopped by Emerson to see the action first hand. She saw, “Four bike trains, lots of colorful handmade signs, and a big poster next to the school entrance where each student put a tally to show how they got to school.”

In an email, Higgs said that, while most kids still got to school in a car, “There were significantly more students (69) who used an active way to get to school. For an urban school with people coming from all over of the city, I think that’s pretty good.” 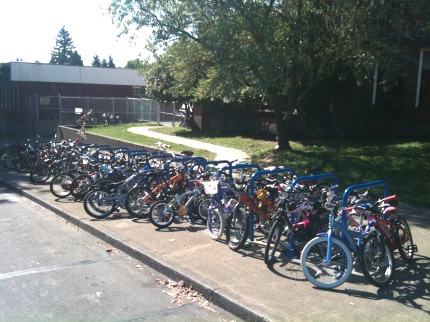 From the looks and sounds of the morning, I think it’s safe to say this was the biggest and best Walk and Bike to School Day Portland has ever had. Statistically, more schools than ever participated and, according to City of Portland Safe Routes to School program manager Gabe Graff, there was “an impressive show of support for Safe Routes to School” by the bigwigs at Atkinson. Graff gives credit on the day to all the volunteers that make it possible.

Family biking is the Next Big Thing for biking here in Portland and making sure our streets are safe for kids should be the standard by which we measure our transportation success.

What did you see out on the streets this morning? Did you make an extra effort to bike or walk with the kids to school today?

Everybody just seems happier when they are on foot or on bike. Easier to say hello and just be part of the community.

Jonathon thanks for the continuing coverage.

My first-grader bikes her one-mile commute daily (we’re car-free) and was amazed and delighted by the crowded racks this morning at Chief Joseph. Another mom gave me my favorite quote of the day: As she and her first-grader walked to school he wondered aloud, “Why are there all these people in cars? Don’t they know it’s a beautiful morning?” Indeed.

I’m chiming in here just because it’s a great and important story even though there aren’t a lot of other comments.

We had an inspiring morning biking to school with other parents and kids and we are now on board with Sabin’s Tuesday bike train.

Here is a great place to remind everyone of the continuing effort to help kids and parents bike to school: http://www.biketrainpdx.org

Wouldn’t it be cool if Walk + Bike to School Day was a holiday like Valentine’s Day. A day for where everyone celebrated active transportation for kids!

I rode with one of the bike trains to Atkinson elementary this morning, along with Jason Tell, ODOT Region 1 administrator, Trudy Sargent, PPS school board member, Robert Pickett, PPD bike police officer, over a dozen kids and parents biking and more walking! All the kids got stickers, clif bars, pears, and were entertained by a student drumming group. Tour de Ladd was amazing, and I have been hearing stories from around the country about how all of the events were bigger than in previous years!! Over 200 schools participated in Oregon alone!

It was a beautiful day for riding bikes. It’s also amazing to see the effort some families put out to make it to schools that are miles away because they don’t attend the neighborhood school. Looking good, Portland!

Hi Monica, my daughter also enjoyed riding her two wheeler to and from Chief Joe yesterday. Also a mile. Good times seeing so many kids on bikes.

The Abernethy Tour de Ladd was a *huge* success. We couldn’t have asked for better weather, and over the course of the morning, the students rode an amazing 3297 laps around the neighborhood. That’s equal to 1135.68 miles – to San Francisco and back as the crow flies!

With the pledges and raffle money already committed, we’re on track to raise at least as much as last year ($14k) for the Foundation. Money raised by the Foundation goes to pay for staffing positions not otherwise provided by PPS, as well as supporting the Portland Schools Foundation Equity Fund.

Thanks so much to everyone who came out and rode or cheered or volunteered! I’d like to give a special shout-out to Officer Pickett and to Corey from Seven Corners for being fabulous course marshalls once again this year.

At Glencoe we took photos of our overflowing bike racks – Tiny bikes locked up some times 3 deep.
Walk and Bike Day was a good opportunity to get parents interested in a 4th (2nd covered) bike rack.
Our kids are all excited about May – Walk and Bike Month and we hope to get participation as last year!

awesome to see all those bikes! it should look like that every day…