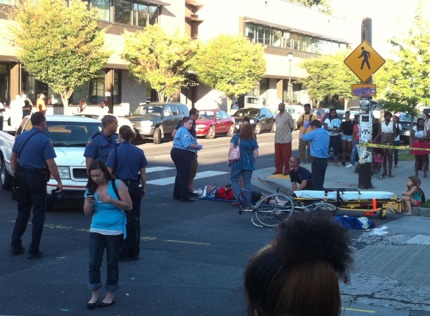 According to the Portland Police Bureau, there was a collision between a father and son riding a tandem bike and a man driving a pickup truck at the intersection of North Kerby and Killingsworth earlier this evening.

The crash happened at about 5:00 pm. The PPB says the truck was being driven by a 29 year-old man who was turning southbound onto Kerby from Killingsworth. Here’s how it went down as per the PPB press release:

“The driver of the truck did not see anyone in the rode [sic] way when he started his turn. He heard someone yell, then saw a tandem style bike with two riders. The riders were a man and his five year-old son who were both wearing their helmets.

The driver of the truck stopped and cooperated fully with the police investigation into this collision. The father and son bike riders were transported to an area hospital. There were no visible injuries other than a bump on the child’s head. The child victim was entered into the Trauma system due to his age.

Alcohol was not a factor in this collision and witnesses state that the vehicle was not driving too fast. No citations have been issued.”

Thanks to reader Nate Gibson for snapping a photo of the scene and sending it in.

So, why is no citation issued for turning in front of another vehicle?

811.050 Failure to yield to rider on bicycle lane;
penalty

The age old excuse: “I didn’t see anyone in the road”

Why is this excuse not accepted at a shooting range? “I didn’t see anyone behind my target”… and yet they are still charged.

Wife and mother of victims

The father was banged up but treated and released same day. The child has multiple severe bruises, hematoma on forehead, and was kept overnight for observation. Thank you so much to the witnesses who helped them and called me. Thanks to the
gentleman cyclist who said a prayer with me before the ambulance ride. Everyone on the police and rescue teams were amazing. I don’t know what the answer is to this dangerously contested area,but I can see this happening again if we don’t figure it out. This is the nightmare of everyone with family members who are cyclists.

Wife and Mother, I’m so sorry for your family’s ordeal.

Thank you again for all the well wishes. Father and son are home now. Getting around, but with limited range of motion and a fair amount of pain. Little improvements every day and exercises from the physical therapist are helping.

I’m a student @Pcc and usually take the shuttle or ride the max to class both because of the lousy cycling conditions near campus and I feel a bit nervous leaving high end bikes locked up on campus.

Cycling on this stretch of killingsworth isn’t much fun. Too many students walking/ riding carelessly combined with more than a few transients riding against the flow of traffic and never with lights, throw in no bike lane also. I’m not sure why but every single time I’ve ridden through the light at the albina/killingsworth intersection someone walks out in front of me without so much as a glance to see if a car/object might be about to run them over.

All this chaos and a single negligent driver can cause some serious damage. No solutions I can think of, just wanted to share my daily experience.

I have recently started a website, the info you offer on this web site has helped me greatly. Thanks for all of your time & work.